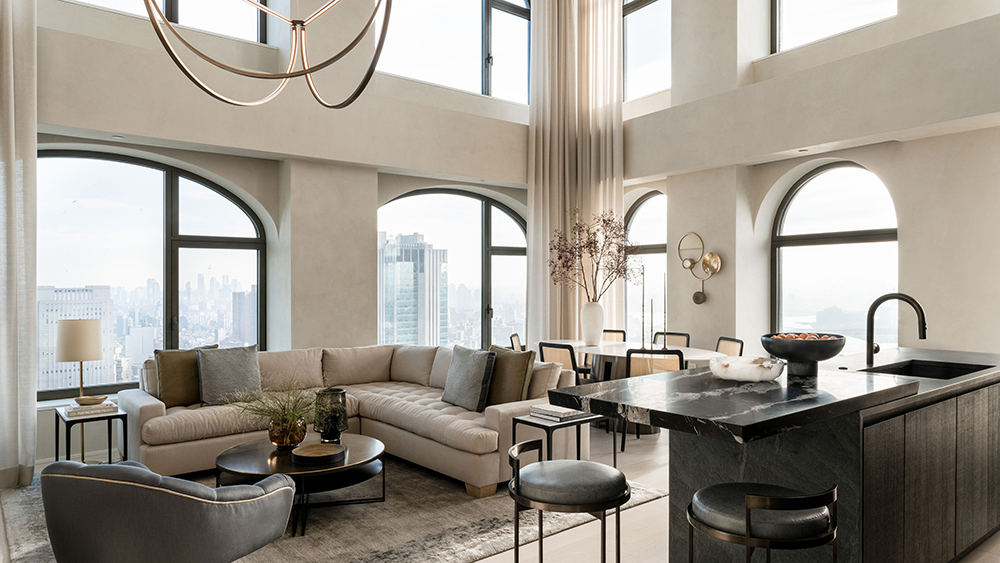 It looks like New York’s 130 William may be just as impressive inside as it is out. The new 66-story condominium skyscraper in Manhattan’s Financial District—acclaimed architect Sir David Adjaye’s newest residential tower in the US—has just gained another lavish unit with interiors that take cues from the high rise’s striking façade.

Located on the 43rd floor, the glitzy apartment 43A was the brainchild of Betsy Berry of B. Berry Interiors. The interior designer, who dreamt up the space for a young couple and their baby, sought to create living quarters that were in keeping with Adjaye’s trademark exterior and the building’s sleek, modern architecture and finishes.

“Sir David’s exterior is so inspiring with the large arched windows and creative use of the upper terraces,” Berry told Robb Report. “As a whole, my inspiration for the project was New York City itself and the dramatic views that are captured from every room.”

The city skyline is just one highlight, though. Spanning a total of 2,490 square feet, the condo is full of custom design features that set it apart from other residences in the Big Apple, according to Berry. The property also features double-height living spaces, which is somewhat of a rarity in Manhattan, along with huge windows fitted with motorized shades.

The layout comprises a total of four bedrooms and four and a half bathrooms, along with a living room, kitchen, foyer, study and nursery. Berry incorporated unique furniture and art within each space to add further flair.

The home features bespoke Farrow & Ball wallpaper throughout, along with streamlined custom millwork in the living room, study and guest bedroom. Almost all the upholstery, including the living room sectional, study sofa, master bed, guest bed and nursery daybed, was created specifically for the apartment by Manzanares. There is also a healthy dose of original art, including two paintings by French artist Louise Cara in the master bedroom, a photograph by Landon Nordeman in the study and a playful piece by artist Laura Deems in the nursery, to name but a few.

There is a photograph by Landon Nordeman in the study.  Ali Harper Wittorf

Other highlights include one-off rugs by Patterson Flynn, soft wools and fabrics from Holland & Sherry and Sandra Jordan, as well as sculptural light fixtures and wall sconces by Ross Gardam. To top it off, luxe black marble adorns the bathrooms and the kitchen where there is also a collection of top-tier Gaggenau appliances.

Of course, Berry is not the only one to tackle the inside of 130 William. Adjaye, who was just awarded the inaugural Charlotte Perriand Award for design trailblazers, previously partnered with Aston Martin to create two penthouses and three loggias on the 59th and 60th floors that were offered alongside a limited-edition, custom DBX.

The tower boasts 244 units all up, which means plenty of more designers can leave their mark.