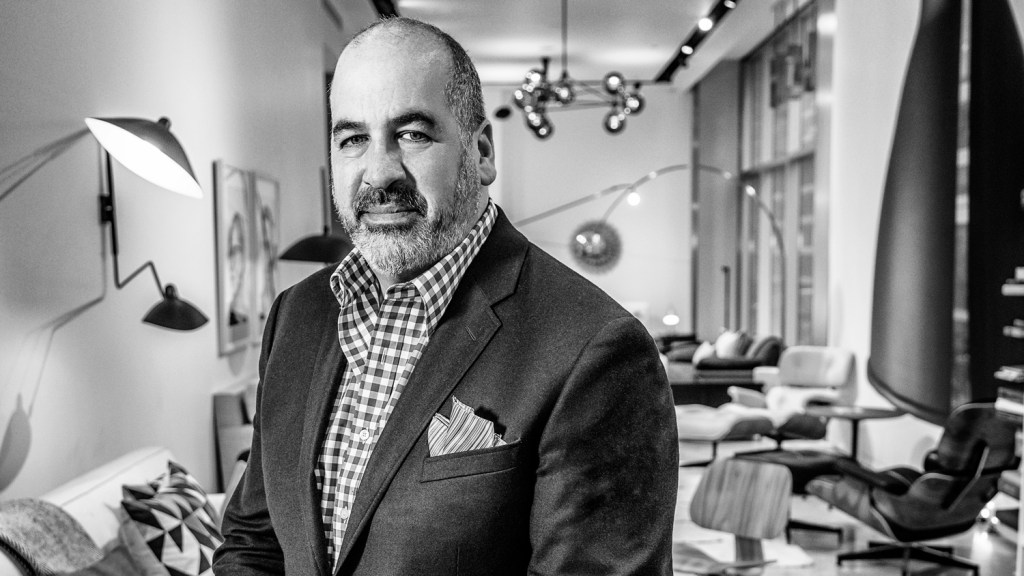 When not acting in his role as CEO of Design Within Reach (DWR), John Edelman can be found strolling through flea markets (he fell in love with his wife at one), driving fun cars, and hunting down modern design. Edelman was also recently named president of Be Original Americas, a nonprofit dedicated to educating designers, makers, and the public on the value of authentic design—so he practices and preaches. With a refined eye and access to DWR’s superb trove, he is passionate about keeping it real.

If you look at my business, I’m not involved in trends at all. I’m involved in the modern and the beautiful. Modern is forever. People say, “When did modern come back in style?” Come back? It’s been selling since 1950! When Steve Jobs launched the iPhone, there was a Corbusier chair and a Saarinen tulip table on a blank stage with nothing else except for him and the phone. That was a statement that modern is forever.

Near where I grew up in Connecticut, there was a BMW down the street at a horse farm, sitting idle in a field. I said to my neighbors, “I’ll give you $25, and I’ll tow the car away.” They agreed. My older brother came with a tractor, and we towed the car a mile to our house. I’m not mechanical at all, so I polished the car and sold it to a mechanic for 600 bucks a month later. That was the start of my car obsession. By the time I was 16, I had bought and sold seven cars.

I’m currently fixing up two 1950s Studebakers designed by Raymond Loewy. They have a classic bullet nose, which was only available for ’50 and ’51. The rear doors on the four-door model are called “suicide doors.” I’m updating them with modern engines, transmissions, and brakes. Without the modifications, they’re not that much fun to drive, but they’re aesthetically pleasing.

I learned about modern furniture from flea markets, especially the one on 26th Street and in Manhattan [now defunct]. In my late twenties, I began getting fascinated with modern furniture, studying it. I became an expert. My wife and I fell in love by going to the flea market, understanding we had a shared aesthetic. How could you not fall in love with that person when you have those kinds of interests?

I have a uniform: Jean Shop jeans, the best jeans in the world in my opinion. [Founder] Eric Goldstein lives and breathes quality jeans. My shirts are all from the Hamilton shirtmaker in Houston, Texas. I’ve been buying there for 15 years. I wear a blazer from John Varvatos. That’s as fancy as I get.

I have a small addiction for 1950s portable televisions and own 30 or 40 of them. These TVs were a piece of furniture. Today, we do everything in our power to hide the television. It’s gotten flatter. It disappears against the wall. But in those days, people were proud to have a TV. I also still have all my radios and love the Weltron model 2001—a Martian head with an 8-track player as the mouth. I have 15 of those from flea markets.

When I graduated from college, my father gave me his Rolex Daytona. I wore that watch for 10 years, never took it off. One day I found this really cool 1970s Omega chronograph, which I still have. It opened up this world. I started finding forgotten watches of the ’70s—Seikos, Omegas, and Breitlings. They were just exactly my aesthetic. I’d find the watch in one place, the band somewhere else, the time-correct box in yet another place. That whole hunting thing, I find it almost therapeutic.

For watches, I go online to Hodinkee and Bob’s Watches. I do a lot of eBay, as well. It’s a godsend for anyone who collects, especially if you’re buying separate pieces and creating one fully constructed set. For cars, I rarely go to auto shows. I love Hemmings Motor News, and I get the daily newsletter from Bring a Trailer—everything from project cars that are rickety old junks to $200,000 classics. It’s for car junkies.