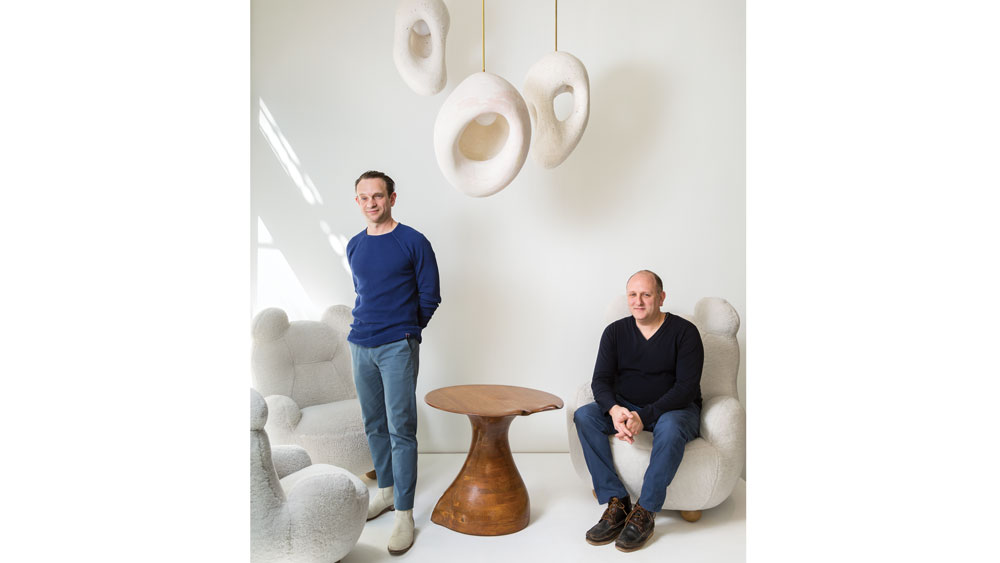 From its beginning 20 years ago, Manhattan’s trendsetting R & Company was conceived as something more than a gallery selling beautiful things. Founders Zesty Meyers and Evan Snyderman had big dreams—namely, to erase the line between design and art and to educate collectors about the difference between a great object and a merely good one.

They achieved that by presenting the work of legends like American furniture master Wendell Castle and acclaimed Danish modernist Poul Kjaerholm as well as developing the careers of now-established talents, such as artist Katie Stout, the pair of cheeky surrealists known as the Haas Brothers, and glass maestro Jeff Zimmerman.

Now, they’re turning the dial up to 11 with a new, 8,000-square-foot space in Tribeca around the corner from their current gallery (which will remain for special projects). Architect of the moment Kulapat Yantrasast worked his magic on the three-story venue with a 45-foot-tall atrium in the back anchored by a dramatic staircase of Portuguese marble. A massive retractable crane can dart into the main space to pick up a 2,000-pound sculpture if need be.

“Here we can give the program the space it deserves,” says Snyderman. “It’s taken us a while to get here, and we want to share what we’ve learned.” Even more than before, R & Company will function as a mini museum of sorts, with a library and archive for scholars and an education program to boot. Meyers puts it very simply: “We’re not done. We still have something to prove.”

We asked R & Company’s dynamic duo for some highlights of their last two decades in design.

Wendell Castle’s Reclining Environment for One, originally made for an exhibition at the American Craft Museum in 1969. The large stack-laminated seating sculpture is like a wooden igloo with a flocked fiberglass tail that lit up when one sat down on the shag-carpeted seat inside. I discovered the seminal work buried under bricks in a kiln shed on the artist’s property on one of my first visits to his studio around 1999. After many months of conversation, Wendell finally agreed to pull it out and restore it for our exhibition AutoPlastic, curated by Donald Albrecht. The work now resides in a permanent collection in Miami.

The Italian radical design period. In the 1960s and 1970s, a group of young architects, artists, and designers decided to change the way objects influenced the world around them, often creating happenings, performance, and theoretical works for the purpose of conversation and designed to move society forward. These objects now deserve deeper appreciation and preservation.

Collectors are hungry for

The Haas Brothers’ Mini Beasts are making their way into so many great collections worldwide. No two are ever the same. People go nuts for them, and they make you smile. We see them as the modern-day Lalanne sheep.

Respect it, but not for me

Chrome. I just can’t do it in any capacity.

The one that got away

Nearly two decades ago, we came across one of the two original three-legged chairs designed by Hans Wegner at a European auction house. I still think about the significance of this original rare piece that has been replicated so many times and how the design of the form and material helped define a movement that pushed technology forward.

When we first started R & Company, Charles Eames and Jean Prouvé were already famous and acknowledged as significant designers, and we knew that there were other people in those countries that were also interesting, like Greta Grossman. We’ve always sought out regions and time periods that were overlooked and found visionary designers, like Wendell Castle and Joaquim Tenreiro.

Collectors are hungry for

We have been working with Jeff Zimmerman since the beginning of R & Company, and he is having a second decade that is even more successful than his first. The longevity and ability to reinvent oneself as a designer is the dream and is what has attracted so many different people to Zimmerman’s work.