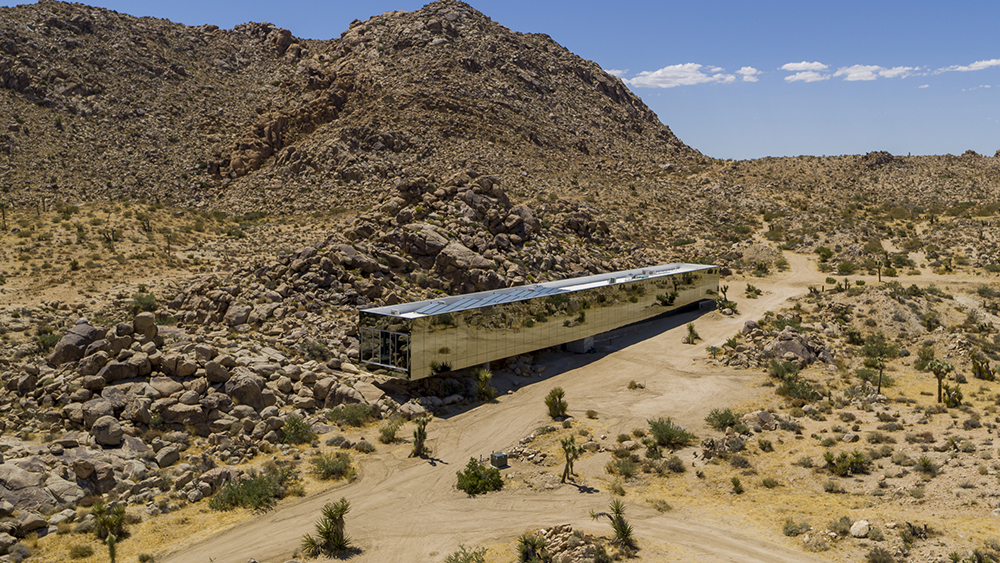 In 2019, American Psycho producer Chris Hanley built a killer manse in Joshua Tree, California. Now the singular architectural abode is up for rent.

Set on 90 acres in the famed national park, the aptly named Invisible House features an entirely mirrored facade that reflects the surrounding Mojave Desert, creating the illusion that the structure isn’t really there. The trippy exterior is just one of the house’s highlights, though.

Designed by the Hollywood heavyweight and noted architect Tomas Osinski, the minimalist residence offers a suitably glitzy interior fit for A-listers. In fact, a number of famous singers and bands have already leased the Invisible House for creative projects, including Alicia Keys, Demi Lovato, the Chainsmokers and Korn. It has also been rented by producer Sam Taylor-Johnson and actor Aaron Taylor-Johnson. The home was even reimagined in cartoon form for the “Save Your Tears” music video by the Weeknd and Ariana Grande.

It’s easy to see why, too. The interior stretches over one elongated level and offers roughly 6,200 square feet of space. The walls, which are made of heat-reflecting glass, afford spectacular panoramic views of the desert while ensuring the living quarters stay nice and cool.

At the heart of the property, there is an open-plan living area, a dining room and a modern kitchen, along with a giant 100-foot indoor pool. The three en suite bedrooms, meanwhile, sit at either end of the home for added privacy. All of the bedrooms also come with glazed walls and some even open out onto the desert.

Hanley’s prized creation comes at a cost, of course. Engel & Völkers is currently letting the Invisible House for $150,000 per month.

“The spectacular location, the minimalist architecture and the exclusive amenities all make this property utterly unique.” Raymond Dominguez, sales manager at Engel & Völkers Santa Monica, said in a statement.

Sounds like a trip to Joshua Tree is in order.

Click here to see all the photos of the Invisible House.