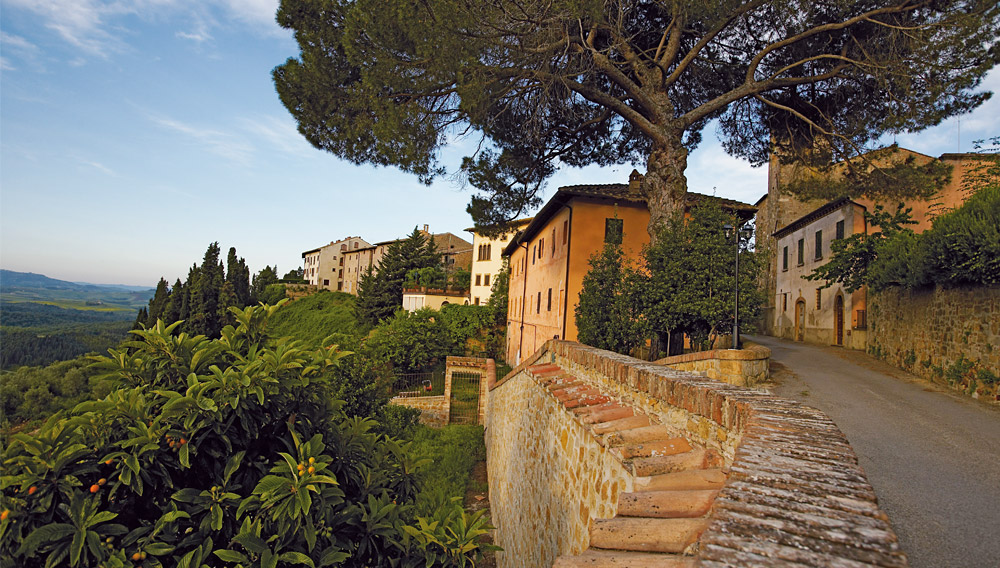 The 800-year-old village of Castelfalfi was home to no more than a dozen people in 2007, when the German-owned multinational TUI purchased the 2,700-acre site. “It was a ghost town,” says Stefan Neuhaus, CEO of the new Toscana Resort Castelfalfi, which TUI is developing within the once-neglected enclave in the Tuscan commune of Montaione. “The borgo [central area] was all tiny apartments of 550 or 650 square feet. The farmhouses were in a state of ruin; there were wild animals living in them.” Those rustic farmhouses, or casali, with their stone facades and terra-cotta tile roofs, had housed the village’s farming families for centuries—before the 1960s, when the promise of more lucrative work began luring the younger generations to action-filled cities such as Florence, Siena, and Pisa.

Today, action has returned to Castelfalfi. Through an ongoing $350 million renovation, TUI is reviving the spirit and rebuilding the bones of the medieval settlement, whose charms include ancient gardens, a small stone church, and an 11th-century citadel with a castle. The developer has imbued the now-burgeoning resort with new-world amenities that suit the estate’s old-world style. Among the attractions are 75 miles of biking, hiking, and riding trails; the 18-hole Mountain Course and the nine-hole Lake Course (and permission to build another nine holes of golf); and various pools for everything from swimming and aqua fitness classes to simple relaxation. Sportsmen will appreciate the concierge at Hotel La Tabaccaia—a recently opened 31-room establishment set within a restored tobacco factory—for the hunting trips it arranges, while wine lovers can attend tastings to sample vintages yielded by Castelfalfi’s more than 30 acres of vineyards. The resort also presses and bottles its own extra-virgin olive oil, derived from the more than 9,000 olive trees in the surrounding hillsides. And of course the property offers regional cuisine. Chef Francesco Ferretti prepares traditional Tuscan fare with seasonal ingredients at Il Rosmarino, and in May, Michelin-star chef Michele Rinaldi will serve up his interpretations of classic Italian dishes at La Rocca di Castelfalfi, a new restaurant to be set in the castle.

Bringing such offerings to this particular parcel of Tuscan countryside is about more than merely running a resort, according to Neuhaus. The broader intent, he says, is “to bring back the authentic life of the town,” and real estate naturally is part of that plan. Toscana Resort Castelfalfi is scheduled to be built out by 2018, and the first phase of development, completed in 2013, saw the restoration and modification of ancient buildings in the borgo. To date, 33 of the 41 apartments created during this effort have been sold; the remaining eight range in size from one to four bedrooms and in price from about $320,000 to $1.1 million. Also as part of this initial phase, eight shops and Hotel La Tabaccaia opened (other hotels will follow), and two farmhouses were completely deconstructed and rebuilt with modern amenities. The two finished casali are La Valle, which contains four two-bedroom apartments priced from about $905,000 to $1.1 million, and the five-bedroom I Bianchi, which is being offered for about $5.4 million and features vaulted ceilings, a private pool, and a separate structure containing a pool house, a small gym, laundry facilities, and a wood-burning oven.

By August of this year, two more casali will have been completed. Falecine, which is on track for finishing in May, will contain only rentals, while the approximately 4,300-square-foot Casiscala—one of the smallest farmhouses on-site—will likely go to a single buyer at a cost of around $3.6 million (the lower end of the price spectrum for the remaining casali) when it is done in late summer. Ultimately, 18 farmhouses in all will be restored, with prices climbing to $6.9 million (for a lot measuring close to 50,000 square feet). Some will have private pools—a key point of difference between the casali and the borgo, where residents can purchase access to four pools set within a 9,200-square-foot terraced garden.

Also in the works is La Collina, a cluster of hilltop residences that will include restored units as well as the resort’s only brand-new construction. The former of these two components will involve the restoration and the joining of an ancient farmhouse and a barn to create seven two-, three-, and four-bedroom apartments, all with private gardens, terraces, and parking. The units will range from approximately $960,000 to $1.46 million. The latter component—a new structure to be erected at the hilltop’s highest point, overlooking both golf courses—will contain two four-bedroom villas with towers, priced from roughly $1.34 million to $1.67 million, and four four-bedroom apartments priced from about $1.1 million to $1.27 million. Local materials, such as terra-cotta tiles for the roofs and indigenous trees for the landscaping, will make for designs that are consistent with the overall resort’s old-world look and feel.

Some 200 Italian craftspeople are plying centuries-old trades such as sabbiatura (sandblasting) in the restoration and construction of Castelfalfi’s buildings, and those charged with decorating the buildings’ interiors have come up with an interior design package (optional and customizable if purchased during the initial construction stages) that exudes a comfortable, updated farmhouse aesthetic. Light woods, exposed stone walls, wood-beamed or groin-vaulted brick ceilings, linen furniture in white and neutral shades, farm tables—all conspire to create a casual, rustic Tuscan ambience. Should buyers prefer to bring in their own designers, they are welcome to do so.

The buyers Castelfalfi has attracted so far do not fit any one mold, according to Neuhaus. Instead, he says, they range “from couples under 40 with families who enjoy the outdoor activities to an older clientele interested in food, wine, culture, and real estate.” Close to half of them are Britons, he says, while a fourth are Germans and the rest are buyers from various countries, including 5 percent from the United States. All have access to the resort’s amenities, including the golf courses (though one must pay to play).

The residents of Toscana Resort Castelfalfi also have recreational options off-site. The resort partners with the nearby Il Gelsomino ranch to offer horseback-riding excursions throughout the countryside, while a partnership with Leonardo Ferragamo’s Marina di Scarlino—in the heart of the Maremma, about an hour and 45 minutes west of Castelfalfi—allows residents and visitors to moor their yachts while they spend time on land. And of course, aficionados of art and architecture have the treasures of Tuscany’s great cities within an hour’s drive—though, with so much available to them at Castelfalfi, they may find it hard to leave.