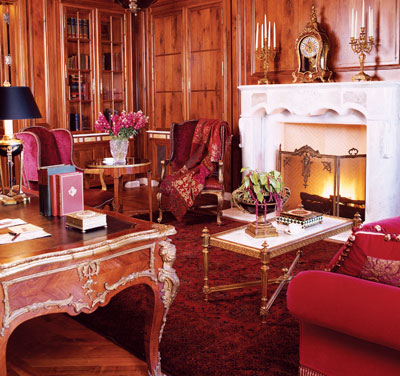 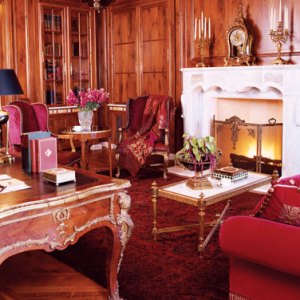 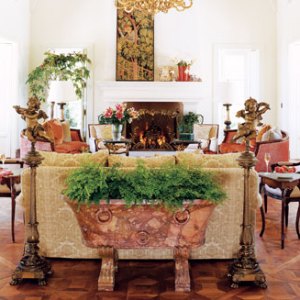 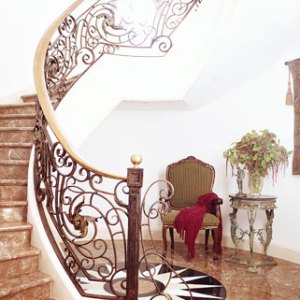 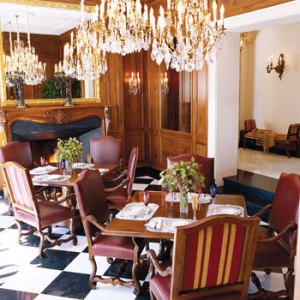 When the family entered the Iraklion Archaeological Museum on Crete while vacationing one summer, they immediately fixated on the marble on the floor. Known as Red of Epidayros, the exquisite reddish brown stone laced with intricate chocolate veins would become a dominant design influence in the hillside estate they built two years ago in Newport Coast, Calif.

Because the husband is of Greek descent, the couple and their three children frequently visited Greece. However, after viewing the stone in the museum, their trips began to include long, hot treks on dusty roads to explore marble yards on Crete and outside of Athens. Encouraged to identify stones for their own bathrooms, the children—who are now teenagers—selected the brightest colors used in the house: translucent white marble streaked with pink and purple veins for one bathroom, green for another, and yellow onyx for the third.

The couple, who at the time lived in neighboring Newport Beach in a Georgian-style house designed by Paul Williams, employed Thiep Cung, lead architect and CEO of the Warner Group Architects in Santa Barbara, Calif., to design their Newport Coast house. Following the owners’ direction, the architects conjured a Provençal-style house with a steep-pitched roof that stands out among the Mediterranean-style homes that dominate the gated community.

The 22,000-square-foot house, which is set on an acre and a half, showcases 30 kinds of slab marble, several carved marble mantelpieces, and outdoor paving stones, all of which were shipped from Greece to California in some 30 containers. “It was a huge undertaking,” says the wife. “It wasn’t like going to Walker Zanger and picking 12-by-12-inch tiles.”

In addition to the family’s numerous scouting forays, Cung and Warner Group interior designer Jessica Bridges made five trips between them to scour marble yards in Greece for more samples. Cung also journeyed to Carrara, Italy, to identify some of the gray and beige marble for the bathrooms. The selection process extended over two years, and Cung and Bridges incorporated marble into every room in the house, even in low-visibility areas, such as the basement floor and the laundry room counters and floor.

“Most people pick three or four stones they like and repeat them throughout a house,” says Bridges. Here, each bathroom contains three or four colors. “The stone selection was so personal,” says the wife. “There’s an extraordinary amount of movement in the marble and variation in color from room to room. They are really alive. You’re either going to love it or you’re not. There’s no spec-house beige in this house.”

The installation of the marble also is unique. The owners insisted that no grout be used; instead, all of the marble is butt-jointed to create the impression of continuous slabs. Measurements had to be exact because most of the material was cut in Greece. Stone craftsmen employed three-dimensional computerized drawings to measure and cut a spiral staircase built of marble that begins at a four-color marble floor medallion in a tower at the front of the house.

The views from the estate were another important consideration and played a major role in determining the house’s layout. The owners halted construction for a couple of months to study the potential prospects from the various rooms. A surveyor staked out the floor plan, and the builder created a 20-foot-high wood platform to simulate the second floor. “We spent a lot of time walking around on this dirt,” says the wife. “We wanted to make sure we got it right.”

The cabinets, beams, moldings, doors, and some of the floors are made of walnut that contains enough knots to convey the impression that the house has stood for centuries. “The husband was very specific about the number of knots per door,” says Cung. “Every door needed to have three or four knots per panel.” The design team selected American walnut because of its durability, color, and grain, the latter of which appears to have more movement than French walnut.

This estate offers an eclectic mix of the Old and New Worlds, from marble tubs and a mural of Plato, Aristotle, and Socrates painted on the library ceiling to a 21st-century game room and a basement basketball court.

From the rustic stone wine cellar, one can select a vintage, then step outside to ponder the ocean and harbor below, and savor a taste of Greece in Orange County.