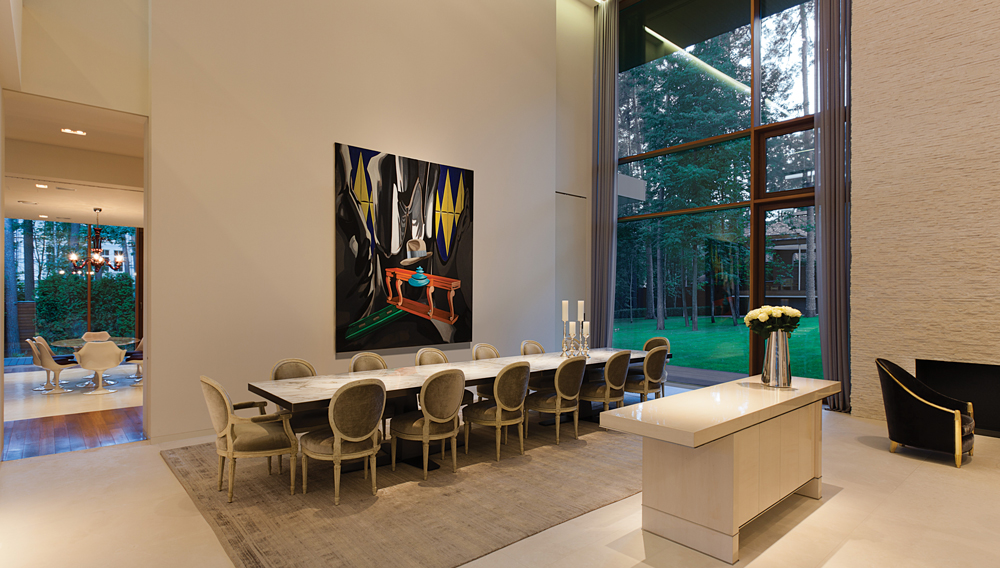 Italian American, James Magni grew up in Omaha, Neb., never imagining that he would become an acclaimed interior designer in Los Angeles and be summoned to Moscow to design the house of a Russian tycoon.

From age 5, his ambition was to become an artist, and he nurtured his talents in a progressive high school, taking classes in painting, sculpture, and varied crafts. At the University of Nebraska in Lincoln, he hoped to become a sculptor but switched to architecture when prompted by a friend. He went to work for a commercial firm in Dallas and there found his true calling: At age 25, he gave a presentation for an office interior that so impressed the client, the client urged Magni to head west to Los Angeles. So first, Magni started his own company in that Texas metropolis and eight years later made the move to L.A. Those early days of establishing his namesake design studio saw many late nights. He and his one associate worked 12-hour days for three years, honing their skills and winning commissions.

Thirty years later, Magni Design has completed some 300 high-end residential interiors and a scatter of other jobs—each bearing his tailored modernist credo. “When you do residential design, you are working in someone’s sacred space,” he explains. “It’s not just decorating—putting objects and artworks in rooms. Our job is to create environments that are meaningful to people, that speak very intimately to who they are and where their spirit can come to life.”

The Moscow project found Magni. The homeowner owns breweries across Russia, but he has also developed luxury homes and has exacting taste. For his own house, he commissioned Anton Mossine, a Moscow architect and principal of Mossine Partners, who shares his love of modernism. On a tree-shrouded plot in Barvikha, an exclusive preserve that is home to billionaires and top politicians, Mossine created an austere structure of reflective white glass—a startling contrast to the eclecticism of its neighbors. One enters through a black-slate security post, from where the house appears as a shimmering apparition that, depending on the season, stands out boldly against the greenery or merges into the snow-covered landscape. The two-story south facade is shaded by louvers of the same white glass as the cladding; the rear opens up to nature and the ground drops away to reveal an indoor pool and spa. A single-story wood guesthouse with a fanciful, Moroccan-inspired interior sits beyond.

The approximately 20,000-square-foot complex was half completed when the owner, unable to find an acceptable decorator in Russia, extended the search to New York and then to Los Angeles. Magni received a call, and after impressing the client at their first meeting, he soon found himself staying in a Moscow hotel and being ferried to the house for a week of intensive consultations with the client and his wife. Both are sophisticated and worldly people, who sent their son and daughter to college in the United States, but their tastes are radically different. The husband had commissioned a house that resembles an executive office: crisp and symmetrical, lined with pale limestone, black granite, and cherry wood. The wife wanted a warmer, more tactile interior, especially in the master suite. Magni had to perform a skillful balancing act to please them both, enriching the architectural purity with refined materials, finishes, and furnishings.

It was one of the greatest challenges the designer had confronted, both personally and logistically. Though he was able to draw on the varied skills of his six-person team, including two Russian speakers, he was plunged into an unfamiliar world. He soon discovered that almost everything would have to be imported, because Moscow, despite its new prosperity, had only three international design showrooms. All of the art and furnishings had to be shipped to Riga in Latvia and then trucked to the estate. Surprisingly, almost everything arrived intact, but many anxious hours were spent scheduling and awaiting each consignment.

While Magni can design from the ground up, he prefers to work with a home’s architect; he has particular respect for Hagy Belzberg, Richard Landry, James Tyler, and Charles Young. “I tell them it’s a doctor-nurse relationship—nobody plays such an essential role as a surgeon’s chief nurse,” he says. The architect-designer collaboration could not be as close for this project, but Magni’s response to what Mossine had already done was respectful.

Mossine conceived the entry as a dramatic axis under the gallery that links the second-floor bedrooms at either end and leads into the soaring great room with its 30-foot-high ceiling. A hearth is set into a sheer wall of bush-hammered limestone, which is flanked by room-height windows. The scale could seem intimidating, but Magni has tamed the void with an elaborate Murano glass chandelier by Barovier & Toso. Below the light fixture, to draw the eye down, is a pair of French art deco armchairs, which are separated by a limited-edition Colette table in sculptured bronze from the designer’s collection.

To one side of this grouping is a sitting area, with a sofa and a calfskin-covered chaise longue situated on a Mansour rug. The lamps were handmade by Cedric Hartman, a craftsman from Magni’s hometown of Omaha. To the other side of the fireplace is a long marble dining table, framed in bronze and surrounded by understated side chairs. “I wanted this area to be low-slung and restrained—a foil to the scale and sweeping views,” says Magni. Taken as a whole, the great room exudes “luxe, calme et volupté” (luxury, tranquillity and pleasure), to quote Charles Baudelaire’s poetic phrase—a far cry from the ostentation that many Russian oligarchs favor.

Still, the clients wanted only the best, and while they liked many of the products in the designer’s eponymous collection, they pressed him to create one-off pieces. As the plans evolved, Magni took the couple shopping in New York, where they acquired artwork from the Mary Boone, Gagosian, and Danese/Corey galleries. They were fascinated by the Chrysler Building, the designer’s favorite skyscraper, so he sketched a stylized montage of the art deco structure’s faceted spire and asked Mansour to create a silk-and-wool rug based on his drawing for the clients’ living room. It took nearly 18 months to get it right.

As a matter of principle and practicality, Magni left Mossine’s structure untouched but changed the lighting to create a domestic ambience and highlight artworks. That process revealed an essential difference between U.S. and Russian building methods: The local practice is to clad solid brick walls with plaster, rather than apply drywall to steel studs. Alterations to the wiring required extensive excavations. The client had recruited a team of workers, who reported directly to him as the general contractor. Every morning they arrived in their blue jumpsuits and set to work. A perfectionist, the client insisted on supervising every aspect of the job; having found the right people, he pushed them to excel. Finally, it was time to hang the art, including several large canvases. The same team arrived, this time wearing orange jumpsuits, wielding hammers and drills.

The wife put her mark on the master suite, requesting a silver-leafed bed and custom cabinets to display her collection of Lalique glass. A woven-silk rug from Mansour graces the wood floor. Such distinctive touches are plentiful throughout the home, and the Boffi kitchen, with its cabinets of Macassar ebony and white lacquer, has its share. In contrast to U.S. homes, where the kitchen is a social hub, this house finds its owners spending more time in the library, which occupies the broad upstairs gallery. “They have a deep love of literature and music, and both play the Steinway grand when they are not reading their favorite books,” says Magni.

The downstairs pool is another popular retreat for the couple, especially in winter. “Mossine had lined the pool area with black granite and slate, and I found that to be wonderfully soothing on gray days,” says the designer. “Coming from California, I had to adjust to the Russian light.” Comfortable white furniture complements the dark tones, and the pool is augmented with a spa, steam room, dry sauna, and Vichy shower.

“We’ve worked with clients in Mexico and South Korea, where the Western influence is strong; everything in Russia is different,” says Magni, reflecting on the project. Overall, he found his client to be deeply serious and confident in his judgments. Occasionally, curiosity surfaced. “Tell me what I am looking at?” the client once asked, as he and his wife considered a white-on-white canvas. Magni offered an explanation of the minimalist painting, and his client made his decision on that piece, as well as the other works they had viewed together, weeks later.