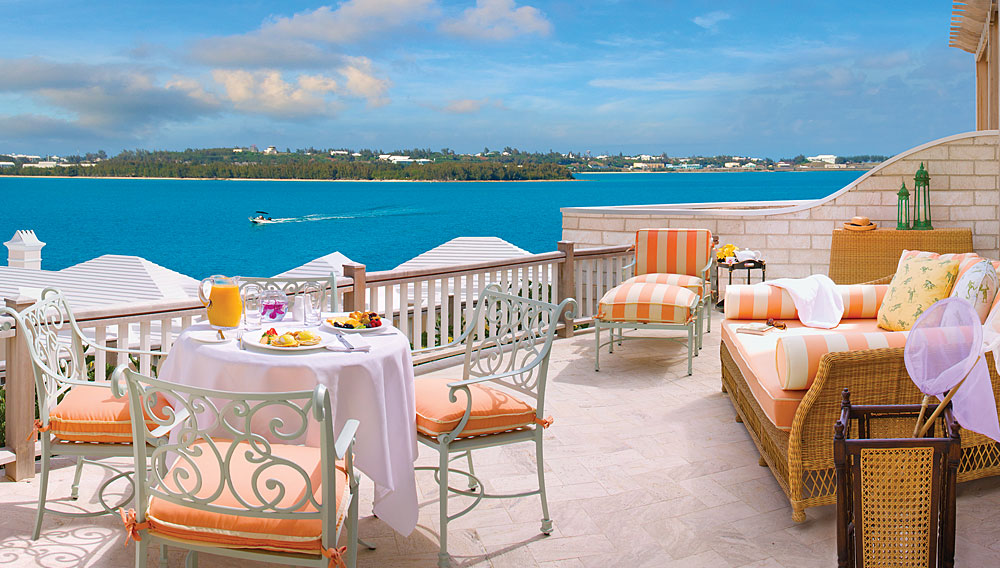 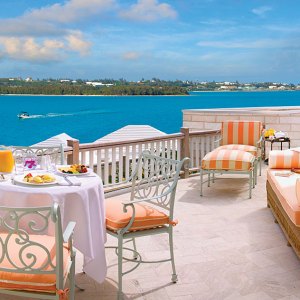 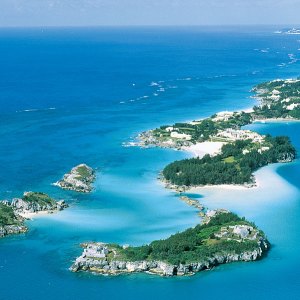 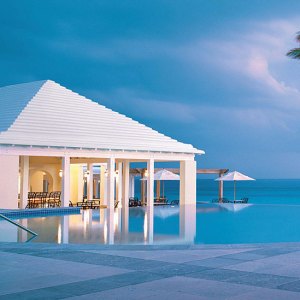 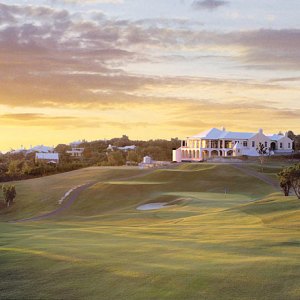 On the night of January 16, 1939, the captain of the Greek cargo steamer Pelinaion decided to make an unscheduled stop at the island of Bermuda in the Atlantic Ocean. He and his crew were ferrying a full load of iron and manganese ore from West Africa to Baltimore, Md., and they needed to refuel before undertaking the last leg of the journey. Local lore has it that the St. David’s Lighthouse on the eastern tip of Bermuda was dark that evening due to a wartime blackout, and, without the benefit of navigational guidance, the Pelinaion ran aground on the jagged coral reef that surrounds much of the island and sank.

Bermuda succeeded, once again, in keeping out uninvited guests.

Historically, Bermudians have relied on barriers—both coral and legal—to keep the rest of the world at bay. As anyone who has inquired about purchasing a vacation home on the tiny British overseas territory knows, foreigners need not apply. For the most part, only citizens may own real estate there legally, and citizenship is almost impossible to obtain. Non-Bermudians may purchase one of the handful of grossly overpriced homes that the government permits foreigners to own, a loophole that has, over the years, allowed the Astors, the Rockefellers, the Fricks, and other affluent families to acquire baronial oceanfront properties there. Yet these investors are the rare exception; the overwhelming majority of visitors longing for permanence on the island learn quickly that their infatuation with Bermuda is unrequited.

However, recently the barrier to property ownership has cracked, if only slightly. Citing a continual decline in the number of tourists that come to Bermuda each year, the government has decided to allow non-Bermudians to own shares in fractional properties such as those at Tucker’s Point Club, Bermuda’s first high-end resort, private club, and residential community. The government has also signed off on the construction of a limited number of luxury hotels, which it hopes will generate much-needed tax revenue.

In late spring, I attended the grand opening of the Tucker’s Point Hotel & Spa. The hotel itself is magnificent, offering that sterling combination of a gorgeous setting and supreme service, and Bermuda is betting heavily on its success. With the U.S. government’s current assault on offshore asset protection and anonymous banking—traditional sources of Bermuda’s wealth—tourism may soon be the island’s only remaining industry. Likewise, Castle Harbour Ltd., the company developing Tucker’s Point, is counting on this hotel to be a gateway into the club’s real estate offerings: fractional ownership in two- and three-bedroom oceanfront flats or larger villas (prices started at $355,000 in 2008). Tucker’s Point also received government approval to offer whole ownership of a limited number of estate homes and townhomes built throughout its 200-acre site (prices start at $3.2 million).

Given the stakes for all involved, it comes as no surprise that the guest list for the hotel’s official christening is a who’s who of local society. The hosts of the evening’s events are Ed Trippe, the president of the Tucker’s Point Club, and his wife, Bobbie. Trippe is the son of Pan American Airways cofounder Juan Trippe, who acquired the Tucker’s Point property in 1958 with several other investors. Sir Richard Gozney, the British governor of Bermuda, is in attendance, as is Ewart Brown, the island’s premier and minister of tourism and transport, who is a driving force behind the resuscitation of Bermuda’s tourist industry. “This is the first full-fledged resort to open in Bermuda in the last 35 years,” Brown tells the assembled group. “It marks the beginning of our platinum period as a luxury destination.”

Brown later tells me that, in the 1980s, Bermuda’s tourism industry had a bed capacity of 10,000. “We are now at 6,000 and are losing tourism dollars to destinations in the Caribbean,” he says, adding that the government plans to expand the number of beds, but to do so selectively. “Bermuda can never be a high-volume destination. The people of Bermuda don’t want that. Instead, we are targeting what we call the ‘urbane traveler.’ “

Brown says that it was no small task convincing the people of Bermuda that their financial salvation could be achieved, in part, by letting affluent non-citizens buy fractional shares from resort properties owned by Americans. “I had to face a number of naysayers in government,” he recalls. Indeed, Brown’s embrace of development and of foreign investment has brought him more than a few political headaches. Two weeks after the opening of the Tucker’s Point Hotel & Spa, the Mid-Ocean News, a Bermuda newspaper, ran the front-page headline, “Brown’s Got to Go or There Will Be ‘Chaos.’ ” According to the article that followed, several backbenchers from Brown’s Progressive Labour Party feel that the premier is “too far out of touch with common Bermudians.”

Several weeks later Brown ignited a political firestorm that involved Bermuda’s two favorite preoccupations: money and immigration. On June 11, his government announced that it would grant permanent residence to four Chinese Muslim Uighurs who had been captured in Pakistan following 9/11 and held at the U.S. detention center at Guantánamo Bay in Cuba on suspicion of being enemy combatants. Bermudians were outraged and took to the streets. However, in an editorial that followed, the island’s largest newspaper, the Royal Gazette, cut bluntly to the heart of the matter. “What’s in it for Bermuda in real terms?” it asked. “Palau apparently has got $200 million in aid from the U.S. for taking 17 Uighurs ‘temporarily.’ So what’s Bermuda’s payoff?”

Brown works the pre-party reception at the Tucker’s Point Hotel & Spa’s grand opening like a seasoned Tammany Hall politico. He greets everyone warmly, saving a particularly enthusiastic welcome for the guests of honor, the actor Michael Douglas and his actress wife, Catherine Zeta-Jones. Douglas’ mother is Bermudian, and he, Zeta-Jones, and their children spend time each year on the island. Douglas is a cool, businesslike presence; he converses with dignitaries and other partygoers with the ease of one who has spent almost his entire life in the public eye. Yet, despite his gravitas, this evening all eyes are on his wife. From her perch atop a pair of Manolo Blahnik pumps, Zeta-Jones engages everyone within earshot in a lively conversation about her chronic sinus infection. “I’ve gone to the hospital every day for the last four weeks,” she announces to no one in particular. As it turns out, this Academy Award–winning actress who effortlessly seduces movie audiences with her cool British sophistication is, off-camera, a real broad—brassy, chatty, and quick with a smile. Admirably uninhibited in speech and gesture, Zeta-Jones is not unlike Bermuda itself: gorgeous and exotic, but thoroughly down to earth. I make a mental note to put her breakthrough 1999 film, Entrapment, on my Netflix list.

The evening’s main festivities are a celebration of the completion of the hotel, and of the Tucker’s Point Club, a project that few thought possible only a few years before. Women in party hats and men in Bermuda shorts and blue blazers convene near the croquet lawn, and raise their glasses to future success.

the day after the hotel’s grand opening, several colleagues and I set out for an afternoon of snorkeling at the reef. We board Tidal Pull, a comfortable, well-equipped dive boat that Tucker’s Point makes available to guests. Our dive masters, a couple of amiable Brits named Stephen and Terry, regale us with tales of shipwrecks and pirates. We pass the expansive, oceanfront homes of Italian Prime Minister Silvio Berlusconi, New York City Mayor Michael Bloomberg, and Texas billionaire Ross Perot. “Now that’s the real Bermuda triangle,” Terry observes.

We arrive at a location on the reef popular with divers, don our masks, and enter the clear, azure water. Below us lies the rotting corpse of the Pelinaion. The ship’s massive steam boilers and engine, now covered with barnacles and algae, reach futilely toward the surface. Brightly colored blue parrot fish, striped sergeant majors, and yellowtail snappers dart in and out of the wreck.

As we snorkel about the reef, I notice that our Sea-Doo diver propulsion vehicles strain mightily against currents and breezes that conspire to pull us away from Bermuda’s shores and out toward the Sargasso Sea. Stephen and Terry make jokes about the Bermuda Triangle. They tell us that since 1600 some 500 ships have run afoul of Bermuda’s reefs and now lie silently on the ocean floor around us. I begin to wonder if, on that dark night in 1939 when the Pelinaion went down, someone flipped the switch at St. David’s Lighthouse for reasons other than wartime precaution.

After a couple of hours of snorkeling, we reboard Tidal Pull, relaxed and awed that such an idyllic place exists only a couple of hours by air from Manhattan. As the sun sets, we troll slowly back to Tucker’s Point through a dredged channel, careful to avoid the coral reefs that grow in the harbor, just below the water’s surface.