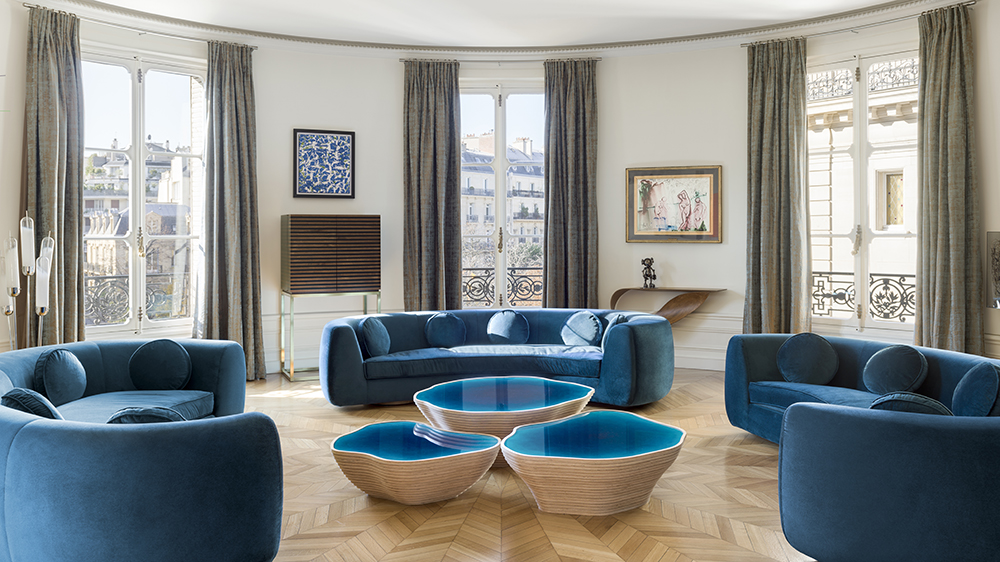 When Julien Lagueste recalls his childhood growing up in the French city of La Trinité-sur-Mer, a memory firmly fixed in his mind are the summers his family would spend by the sea. He was entranced by the Mediterranean landscape, so it’s not by chance that the designer’s work evokes the shore—the paleness of the sand, the organic shape of eroded stone, the reflections and blue hue of the water. Using wood and epoxy resin to mesmerizing effect, Lagueste’s experimental series of coffee and side tables creates the illusion of looking at the cerulean-colored ocean itself.

It was for his 2016 graduate thesis at the Cread Institut in Lyon that Lagueste, 33, conceptualized the theme for his first collection, Souvenirs des îles. “I drew the first three pieces of furniture for my collection and made a prototype of one for my apartment,” he says. Even though Lagueste had formal training and great success showing his tables at Maison & Objet in 2018 and the Grand Palais in Paris in 2019, his creative process involved its share of trial and error.

“I spent a long time improving my drawings and learning the work of the wood and the resin,” he explains. “I had to invent different techniques that remind me of the transparency and depth of the seabed. We didn’t learn things like that at school.”

Working with birch plywood and resin, Lagueste produces all his commissions by hand at his studio in Nantes. For the base, he cuts rings of wood, then sands and stacks them. The tabletops are created by combining resin with various pigments and applying up to five layers of the resulting mixture until the right balance between transparency and different effects evoking the sea is achieved. The layers take 24 hours to set before the next can be worked into the surface.

An up-close look at one of Lagueste’s ocean-inspired designs.  Stephan Julliard

“Each piece needs a long time, but I like things that take time and make little quantities,” he says. Even though the individual tables are made from the same materials, using the same medium, every example is one-of-a-kind due to the myriad variations of the resin. Other colors can be created on request, and Lagueste is currently exploring a potential series inspired by flowers. For now, the birch wood, representing serenity and the strata of rock, contrasted with a soft gradient of blue resin, is his signature, gently blurring the boundaries between furniture and art.

These Sculptural Tables Are Made From One of the World’s Most Sustainable Materials: Cork