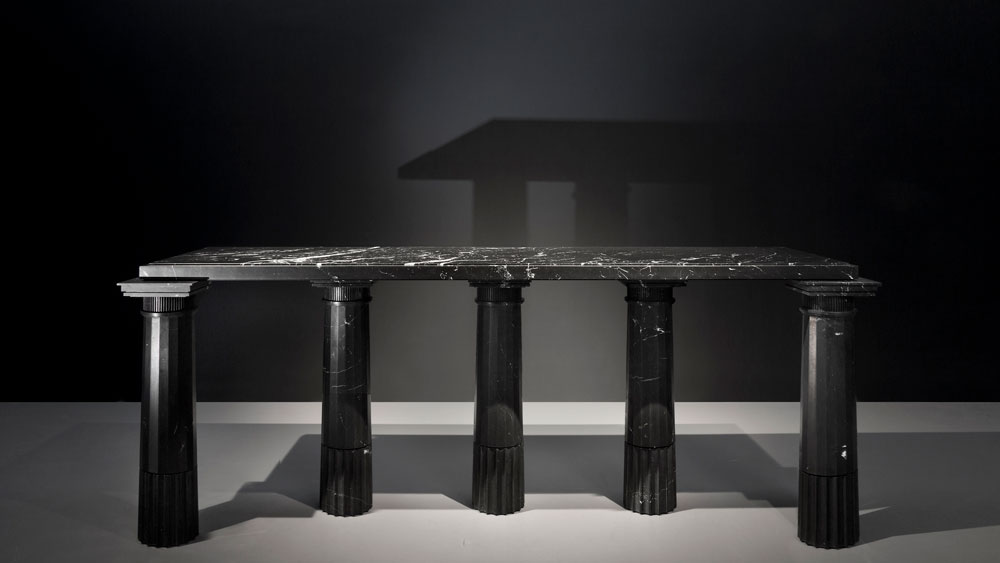 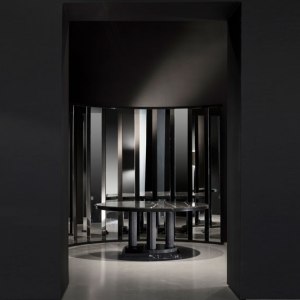 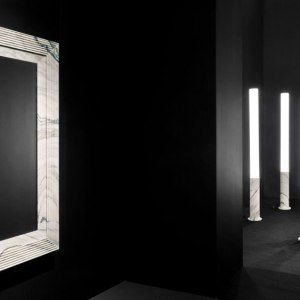 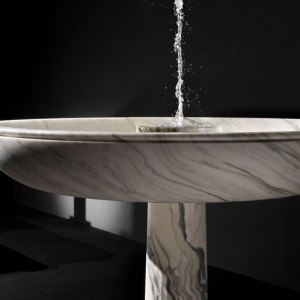 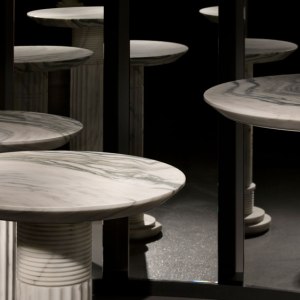 The cult of Karl Lagerfeld now extends to furniture. The fashion designer and restless creative has just unveiled his first collection of sculptural designs with the renowned destination Carpenters Workshop Gallery in Paris, which runs from October 9 through December 23. And we have a first-look at the installation.

The Architectures series is directly influenced by Greco-Roman design principles, calling on canonical proportions and the golden ratio. This is not a demure gathering of first-attempt work; the Kaiser went headfirst into a strong, disciplined collection. It includes gueridons, tables, lamps, consoles, fountains and mirrors—all influenced by antiquity, which Lagerfeld notes in his quest for beauty and modernity. The precise proportions, exacting columns, and purity in form are all apparent in the space, featuring a strict backdrop of black.

It’s smart scenography, given that marble is Lagerfeld’s material of choice. Each limited-edition piece is carved from either Arabescato Fantastico, a rare white marble with dark grey veins, or black Nero Marquina marble, prized for its subtle white “brush stroke-like” surface. The pieces were created—from first cut to polishing—by Italian craftsmen. And special attention was paid to details like the lampshades, which were painted by hand using traditional techniques, adding to the well-choreographed tension of old and new (a Lagerfeld specialty, given his creations for the historic house of Chanel).

We’ve seen a lot of fashion/home design crossover (with mixed results) but this project was directed by the designer’s own vision – not the other way around. Which is to say, this is not a Chanel-does-home experience. The line was also developed by French-Lebanese architect and interior designer Aline Asmar d’Amman, who collaborated with Lagerfeld on the renovation of the Hôtel de Crillon.

And, like most Carpenters Workshop Gallery exhibitions, the collection is available in extremely limited editions. Only eight pieces have been produced in each marble color. Additionally, there are four artist proofs.

Despite the distinctly ancient influences, the pieces are unadorned and read as contemporary designs. A client with the right eye and very good interiors, should find a piece or two that will play nice at home. But the undeniable fact is that only a few major collaborations like this have outsized appeal—fashion legend plus taste-making gallery. Win-win. The chance to own a first edition Lagerfeld is a tempting offer (the exhibition runs from October 19 to December 22).

“The pieces from the body of work Architectures reflect Karl Lagerfeld’s spirit; strength, elegance and culture combined with an ethereal desirability,” says Carpenters Workshop Gallery co-founder Julien Lombrail. “As a tribute to canon of beauty, these functional sculptures are conceived within the aesthetic equation developed since the Greek Antiquity. This collection will remain an artistic testimony of one of the most influential creative minds of our time.”