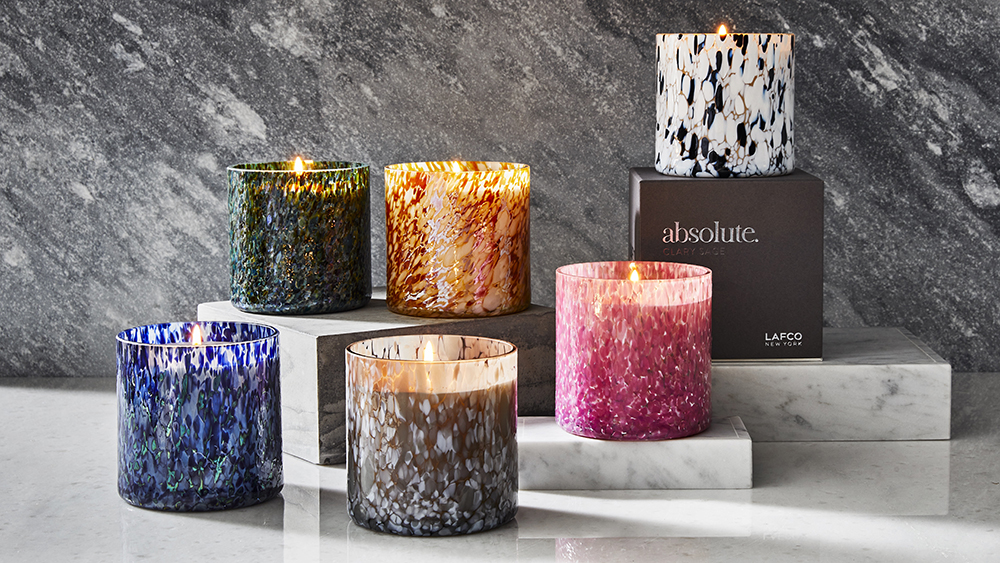 For a product created primarily on Zoom, LAFCO’s new Absolute candles are remarkably beautiful to experience in real life.

That has a lot to do with their painstakingly made glass vessels. The candles, a passion project of the company’s founder and CEO Jon Bresler, are housed in handmade jars from Glassworks Harrachov, a 308-year-old factory in the Czech Republic. It’s the oldest continuously operated facility of its kind in a region that was once considered the world’s high-end glassmaking capital.

In 2019, Bresler spent a week-long creative session experimenting with Harrachov’s artisans using an ancient Venetian technique called macchia—the same approach behind artist Dave Chihuly’s series of undulating bowls. After long days of rolling a special molten glass in a variety of glass chips to create macchia‘s spotted effect, Bresler brought samples back to the U.S., where a plan to fill them with new fragrances quickly developed.

“We decided that this was really going to be such an artistic endeavor that we should go back to the Czech Republic and be there when we start production,” Bresler told Robb Report, adding that he’d planned to fly back in mid-March of 2020. “Lockdown was officially Friday and our plane left on Saturday. And so we didn’t go.”

The factory, like a number of businesses, shut down for safety reasons. The project only picked back up months later, but because of the pandemic’s travel restrictions, Bresler found himself approving the finished jars on video calls. “It was endless hours of Zoom in a glass factory,” he said. “It was pretty wild. But it worked.”

The special—and hard-won—nature of producing the vessels required an equally exceptional fragrance, so Bresler’s team decided to up the ante on the scented wax his New Hampshire-based candle-filling operation would pour into them. Instead of using essential oils, they chose the much more labor-intensive absolute (hence the name).

“Out of a ton of rose petals, you might get 10 liters of essential oil [but only] 20 grams of rose absolute,” Bresler said. “And the idea behind an absolute is because you’re not distilling it and you’re not introducing heat, you can obtain a fragrance that smells as if you are smelling it in nature.”

There are only a handful of natural materials that perfumers can use to create an absolute, and six of them are on display in the candles: rose de mai, fir balsam, clary sage, orange blossom, lavender and oakmoss. (Bresler said picking a favorite was like trying to choose a favorite child, but after trying samples of all six, this writer finds the Balsam Black Pepper scent particularly inviting—and a top-tier candle to gift and light during the holidays.)

Once his customers have made it through the candles’ 100-hour burn time, Bresler—whose products put a premium on natural products and responsible sourcing—hopes they’ll find second purposes for the jars.

“You know, 20 percent of our Instagram is about how to reuse your glass: how to drink from it, how to remove the wax, how to put it in the dishwasher,” he said. “Some would say, oh, what a waste to burn a candle in it. But the idea is not only is this a beautiful object that has an afterlife, but when you burn them and the light starts to refract through these different colors, it’s an incredible experience.”