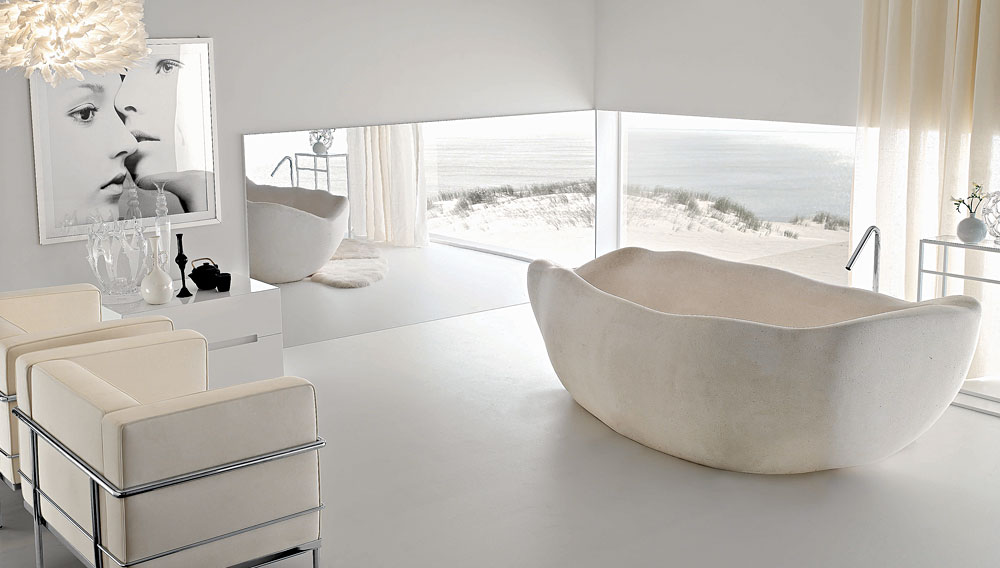 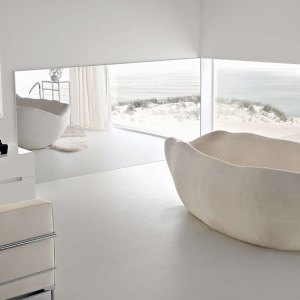 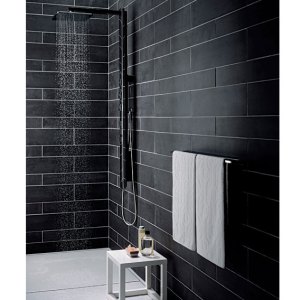 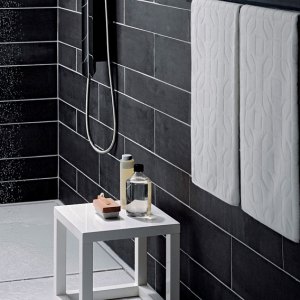 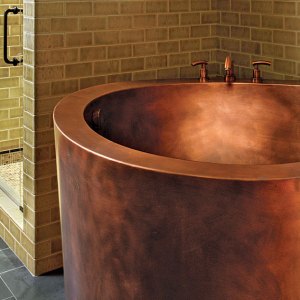 Top designers have reinvented the bathroom, elevating it from an uninspired place of necessity to a sanctuary of amenities ready for you to soak and steam away daily stress. Forget the closet-sized bathrooms of the past. Now, a bathroom may encompass several rooms and incorporate a spa-quality steam room, a freestanding soaking bath, and a dressing area. For those looking to reinvigorate their bathrooms, the following products will help turn a once-overlooked area into a private, residential retreat.

Italian artist Claudio Silvestrin adopted the notion of bathing in the natural elements and has taken it to the extreme. In a collection designed exclusively for Hydrology (www.hydrologychicago.com), a Chicago- based retailer, he has carved this oversize soaking tub ($100,000) from a single block of Supai stone. The tub—also available in Labradorite Bianca, a white, seamless gemstone for $350,000—is part of Silvestrin’s Precious Stoneworks collection, which includes other washbasins carved from single pieces of stone or gemstone, ranging in price from $30,000 to $350,000.

This particular Supai stone tub, weighing almost 3,200 pounds and measuring 93 inches in length and almost 30 inches deep, is the epitome of heft. Its contours and uneven edges are meant to evoke the way in which water often molds and carves stone and other natural elements, and it is accented by a stand that contains narrow drawers and flap doors.

Not all shower systems are created equal, and the Neorest Shower Tower by Toto (www.totousa.com) provides sufficient evidence of that. A rectangular rain forest showerhead is the hallmark of this one-piece design, crafted in polished chrome, but a series of three body-spray units accentuates the shower experience. With hydromassage and medium- or full-body spray configurations, this shower system can provide an all-encompassing hydrotherapy experience for one or a comfortable shower for two.

The Shower Tower, which costs $7,535, also comes equipped with technology providing immediate temperature control, which means that bathers no longer need to worry about sudden fluctuations in water temperature due to changes in water pressure from other household activities.

Lately, the Japanese custom of washing and rinsing the body carefully before soaking up to the chin in a tub of clean, hot water has grown more popular. “This style of bathing has more to do with the holistic experience of quiet repose,” says Krista Payne, marketing manager of Diamond Spas (www.diamondspas.com). And yet, an attractive and well-designed soaking tub can be hard to find.

To remedy that, designer Jacqueline Corea, of Corea Sotropa Interior Design, has created a copper circular Japanese soaking bath ($17,699), a deep copper tub that is 42 inches in diameter and 35 inches deep. Available through Diamond Spas, the tub contains a bench seat, also made of copper, and an attractively bowed top ledge. But it is the deep copper color that proves to be this tub’s most striking feature. The durability of copper and its antibacterial properties have made it, for years, the material of choice for bath-related products. But for those who are less enamored with the copper sheen, a stainless steel variation of Corea’s tub also is available.

In The Hot Seat

For years, those seeking the holistic benefits of a sauna sit-in understood that they came with a bit of sacrifice; namely, sweating out calories in a room that felt hot enough to cook a holiday roast. But thanks to the latest sauna innovations incorporating infrared heaters—which emit a radiant heat that can be absorbed directly by the body—current models, such as the Clearlight far infrared saunas sold at San Francisco–based Sauna Works (www.infraredsauna.com), are cooler and more comfortable than the traditional alternatives.

Among infrared saunas, the most popular models use heaters that are made up of large carbon panels or ceramic tubes. The carbon panels produce a longer wave that is better absorbed by the body, but produces less heat. The ceramic tubes tend to produce a lot of heat, but with a shorter wave that is less effectively absorbed. The newest Clearlight model, the IS-C ($4,495), adds ceramic compounds to the carbon panels. That marriage creates a strong source of heat that penetrates deeply and evenly into the body, which also produces the greatest health benefits.

Like all infrared saunas, the IS-C is smaller than you might expect, even though it can accommodate up to four people. “With infrared saunas, you want to be sitting up, so that your body is close to the heaters,” explains Andy Kaps, vice president of Sauna Works. These saunas have windows, recessed halogen accent lights, digital keypads both inside and outside the sauna, and a stereo with two-way speakers for entertainment.

If you don’t know what you want in a steam room, but you’re pretty sure you’ll know it when you see it, try contacting one of the in-house architects at Helo (www.helo.co.uk), a design-build firm in West Sussex, England, that specializes in bathrooms and steam rooms. Using composite materials and drawing from a virtually unlimited array of porcelain, ceramic, or granite tiles of your choosing, the architect and a team of designers and craftsmen will build a fully watertight enclosure in any room of your choice. The steam room will be powered by Helo steam generators, which are digitally programmable to control steam, run-time, and temperature. Whatever type of room you envision, Helo’s designers guarantee that it will be the only one of its kind.

This 63-inch freestanding tub ($11,500) is designed by Ross Lovegrove, a Welsh artist who also designed the chassis for several Apple computers. His bath collection, called Organic Essentialism, incorporates bulbous shapes in taps and faucets while mixing round and oval shapes in the basins and toilets, all of which evoke the nature of water in puddle and droplet form. And yet, the collection seems futuristic in much the same way that science-fiction films depict architecture and interior designs in unusual, enigmatic shapes.

The bath and toilets are made from seamless antimicrobial porcelain, and the faucets and taps come in chrome but may be upgraded with gold plating. Lovegrove’s entire collection is available through Hydrology, whose employees have gone so far as to say, “If Apple computers ever had a bath store, this is what it would look like.”

When outfitting a bathroom, you may notice that seemingly endless varieties of designer faucets, tiles, sinks, and lighting fixtures are at your disposal, but when it comes to drains, they often are poorly made and with uninspired designs. Fortunately, one California-based company has committed itself to reversing that trend.

Putting a little class into the shower drain was the inspiration behind Designer Drains (www.designerdrains.com), which crafts drain covers from reclaimed stainless steel and incorporates designs inspired by classic Greek tiles, leaf patterns, ancient script, and nautilus shells, among others. Designer Peter Papadatos is creating new patterns all the time; the newest, Greek Anthemion, is molded after artistic motifs of fan-shaped leaves of palm trees. Another of Papadatos’ newest creations, called Sprockets, is, as he says, intended to appeal to gearheads. Regardless of your design preferences, one thing is clear: your drain will never be ordinary again.