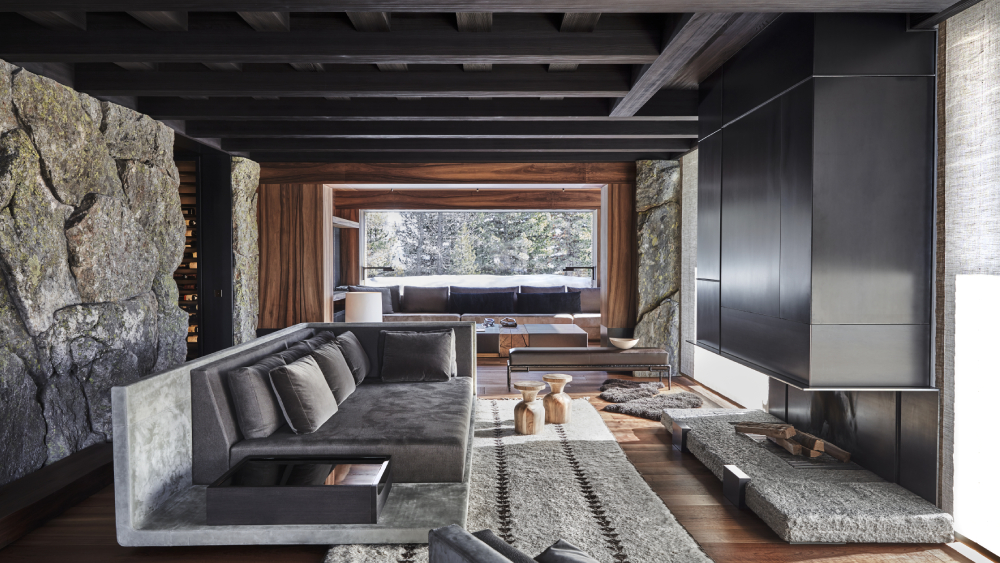 St. Moritz has long been a respite for writers and creatives like the Giacometti brothers, Thomas Mann and Friedrich Nietzsche. What none of them mentioned in their various artworks and musings, though, is that designing a home here can be extremely difficult. It’s an endeavor that French interior design house Liaigre took on regardless, creating a modern mountain villa cast in materials that pay homage to the surrounding landscape.

Liaigre designed the residence for a reoccurring client who wanted a ski home for a family in the winter months. When they started the interiors were very ‘70s. “In the living room, I think, the previous owners had put a tiger skin on the ceiling,” says Liaigre creative director Frauke Meyer. “We were laughing about this all the time—we would always say, ‘Shouldn’t we put the tiger skin on the ceiling again?’” Instead, the Liaigre team went with a more bespoke approach, creating custom furnishings for the space. This was in part to create new pieces that would capture the spirit of the surrounding mountains—it was also because, on a more practical level, the owner was already pretty well-acquainted with Liaigre’s furniture line from a large home that the brand was designing for them in Munich.

Logistically, though, the home is situated on a very narrow road at the top of a mountain—great for views, but potentially hazardous for hauling bespoke furniture around. “Each time when you went up no one could pass,” says Meyer. “It was very far away from the center of St. Moritz. You couldn’t see the village, you only had the beautiful view of the lake through the trees.” It’s these vistas that inspired the home’s materials and finishes. The walls and ceilings in the dining room and kitchen are natural walnut—the copper oven hood in the latter is a nod to the bells worn by the cows in nearby pastures. In the living room, Liaigre selected soft, light fabrics like lambskin and mohair as an homage to the surrounding snowdrifts.

Views of the home’s stone-clad bathroom.  Photography by Mark Seelen

But one of the biggest material finds happened almost by accident. The owner wanted to add a sauna and spa onto the basement level of the house; Liaigre had to break new ground and dig down into the earth to make that happen. In the process, they had to drill through a dark gray granite. Rather than throw it all away, Meyer and her team carved out large chunks of the rock and incorporated it elsewhere in the home: In the entryway, juxtaposed by cold metal finishes and a warm, wooden staircase with leather handrails; on the floor of the kitchen; in some of the bathrooms and elsewhere. The material is not smoothed over in the slightest, so it looks much the same as it did when Liaigre first excavated it, effectively incorporating a part of the mountain into the home.

Since it’s a family home, there’s a separate “dormitory” area for the children, a wing that has its own bathroom. This bathroom uses material vocabulary just as much as the rest of the home—the walls and floors are made of gray travertine, a material with small holes in it. Rather than fill these in, as is common practice, Liaigre left it looking a bit more natural. The primary bathroom, meanwhile, is awash in white onyx, another nod to snowy mountaintops.

The idea was, as per Meyer, to create a space that combined sophisticated elements with original, authentic, rough materials. Altogether, it’s a residence that looks less conventional chalet and more design-forward winter escape. Liaigre never did end up putting that tiger skin back, though—probably for the best.