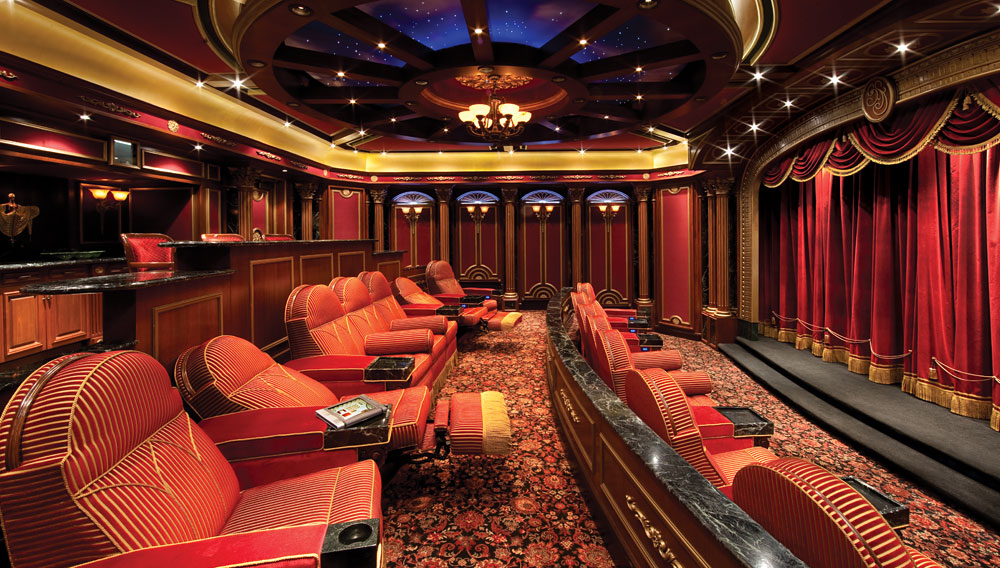 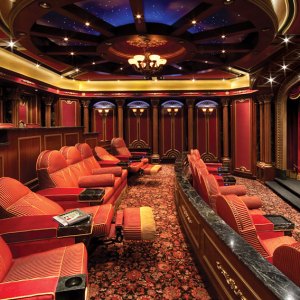 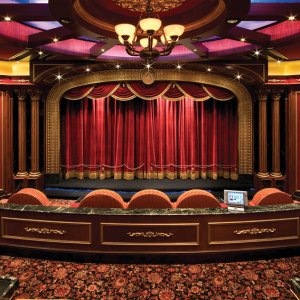 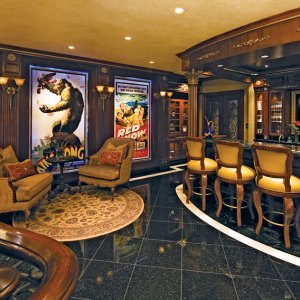 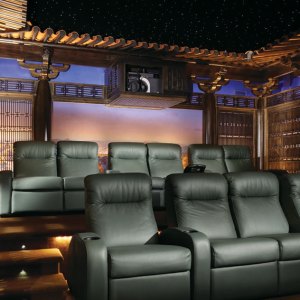 Home cinemas have grown in popularity over the past two decades—so much so, in fact, that they are now considered to be requisite amenities in upscale residences. Homeowners’ expectations for their screening rooms have risen too. The spaces must be more than dedicated rooms in which to enjoy movies: They must offer audio-video performance on a par with commercial theaters, and they must showcase decor that reflects a home’s style, quality, and comfort. To meet these needs, designers and installers are finding creative ways to splice together an immersive movie-watching experience and over-the-top design. Following are four examples, including the First Impressions–designed cinema shown here, that prove today’s home theaters can be scene-stealers.

PUTTIN’ ON THE GLITZ

When the owner of a three-story, 35,000-square-foot estate in western Canada decided a few years ago to have a theater installed in his basement, he knew he wanted a “glitzy” space that would complement the rest of his home’s classically styled decor. For help in this endeavor, he hired the Miami-based design firm First Impressions Theme Theatres, whose answer to glitzy included 14 fully reclining seats, from the company’s CinePalaisLoungers series, with heat and massage functions, in-arm blanket storage, and granite-topped snack trays. Adding to the extravagant feel of the theater are various decorative elements, from the golf leaf and mahogany embellishments to the red- and gold-colored acoustical wall panels, which were designed to match the red-velvet, gold-tasseled curtains covering the movie screen. A marble staircase leads from the home’s main foyer down to the theater’s lobby, where a bar and computerized wine cellar are among the amenities.

At the homeowner’s request, First Impressions equipped the nearly 13-foot film screen (measured diagonally) with masking technology. The apparatus detects the aspect ratio of video content; as the projector “talks” to the screen motor, the red drapes move in and out to frame the selected picture size on the screen.

The Brooklyn, N.Y.–based theater designer Theo Kalomirakis studied Chinese architecture and culture for three months as preparation for this project: a cinema for a client’s Nashville, Tenn., home. Kalomirakis worked with the property’s architect, Brad Norris (www.norrisarchitecture.com), and contractor, Jimmy Franks (www.jimmyfrankshomes.com), as well as the audio-video integrators at Matrix Installations, to employ his intricate and intimate 10-seat design. Drawing inspiration from historical Chinese buildings, some dating to the 11th century, Kalomirakis used bamboo and other exotic woods for the walls and for the box holding the Runco three-chip projector. To further adorn the space, he relied on Chinese watercolors and a number of Chinese antiques from the homeowner’s art collection. In addition to an impressive suite of audio and video components—including a 10-foot-diagonal Stewart film screen, which, when not in use, is covered by a large Chinese landscape painting—the theater features an LED-lit ceiling that creates for the viewer the illusion of watching movies beneath a starry night sky.

LUCK BE A LADY

The owner of this Laguna Beach, Calif., home went all in to create his dream cinema. He invested some

$3 million in what would be a three-year design-and-build process involving the addition of an 8,500-square-foot structure to his property and requiring nearly 3,000 hours of installation. The finished 45-seat space, which he calls Lady Luck, takes after the 85-year-old Byrd Theatre in Richmond, Va., evoking the golden age of cinema with red damask–covered chairs and curtains, a recessed ceiling, a crystal chandelier, silk wall coverings, and carved wood accents. The balcony features two 46-inch LED-backlit TVs that display whatever is playing on the theater’s curved 19.5-foot-diagonal screen—the largest Stewart Filmscreen has produced for a private cinema. Also on the upper level are men’s and women’s restrooms with TVs, a lobby with a digital movie-poster screen, and a 3,000-bottle wine cellar.

THE PLUM OF BEVERLY HILLS

This elaborate 16-seat theater is perfectly at home inside a 22,000-square-foot Beverly Hills, Calif., villa (Robb Report’s Ultimate Home 2012), thanks in part to the property’s architect, Richard Landry, and interior designer, Joan Behnke. Landry contributed such elements as the circular design of the mahogany ceiling, which required 1,100 hours to build, and Behnke created the ebony-and-mahogany cabinets that sit behind the front two rows of CinemaTech leather seats. Behnke also mandated that no speakers or speaker grilles be visible through the thick mahogany base that she had installed beneath the 14-foot-wide film screen. Because sound does not travel well through wood, Roberts Home Audio and Video, together with the speaker maker California Audio Technology, designed custom cabinets for the system’s six 12-inch subwoofers. The cabinets direct the sound from the subwoofers up at a 45-degree angle, so that it passes through the cloth atop the wood base. The result: tight low-frequency responses down to a bone-rattling 19 Hz.