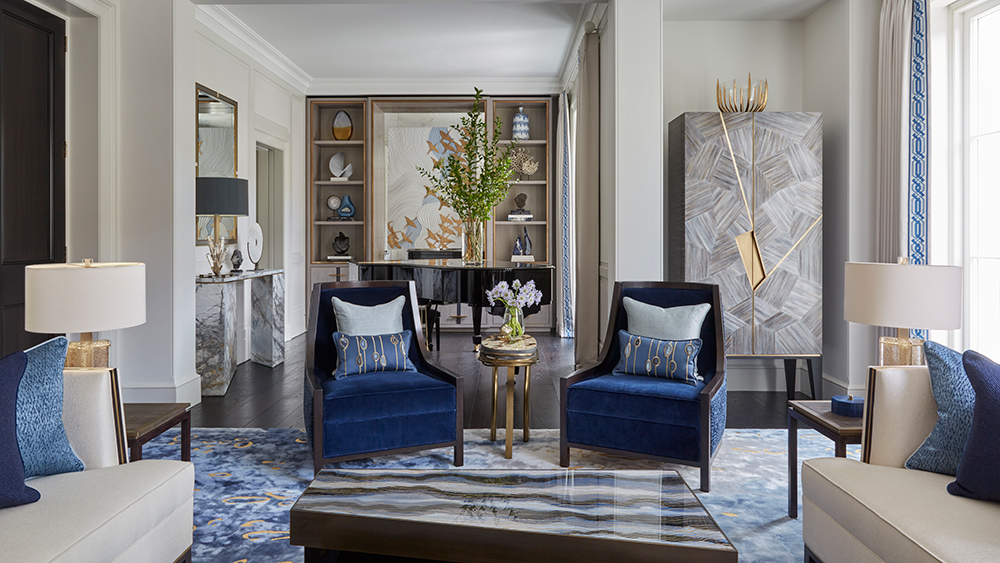 When British interior designer Katharine Pooley revamped the Notting Hill home of an international client, a few rooms were top priority: the office, the game room and the indoor pool. Since the owner is such a passionate collector of supercars, Pooley integrated a few small details into some of the spaces that nod towards the automotive world. It’s an approach that stands in sharp juxtaposition to the seven-story mansion’s exterior, which is white stucco; the building itself is hundreds of years old.

One of the first orders of business was the office. The owner is a businessman and works from home, so it was important that the space be both incredibly functional and visually impressive. Pooley pulled out all the stops, starting with a custom, dark blue silk rug that has metallic accents reminiscent of a race car’s drift marks—that navy-and-gold color palette continues in the living room—as well as a bespoke wooden desk courtesy of the joiners at Halstock. The shelves are largely full of antiques and baubles that the interior designer sourced herself; they also house the owner’s guitar collection. Automotive design served as some of the inspiration here, too: The lower cabinet handles reference the shape of a McLaren’s headlights.

The game room was another all-important space, and integrates the car collection rather obviously—one of the autos is on display behind a glass wall here at all times. It’s positioned on an elevator, so it can be lifted up and out of this basement level onto the street. Virtually all of the major pieces in this space are bespoke, including the billiards table, the ping pong table and the poker table—even the pool cues themselves and ping pong paddles were custom and bear monograms. Artisan Alexandra Llewellyn made a backgammon set especially for the project which features—you guessed it—a car on the side. Also on this floor is a spacious home cinema for movie nights.

The game room, which features a custom backgammon set, poker table and billiards table (with a supercar watching over, of course).  James McDonald

One of the home’s most jaw-dropping spaces though is the indoor pool, which looks more like it belongs in a luxe hotel spa than a privately owned home. Above the water there is a set of wire sculptures that resemble ballet dancers, and a green wall of moss adds a pop of color to the otherwise light, airy room. It’s a bit reminiscent of something you’d find in the world of Japanese design, which is intentional, as the owner collects Japanese artwork and visits there often.

The pool, which features a green wall of moss  James McDonald

To juxtapose the earthier, more masculine-feeling game room and basement spaces, the living room and dining room feature a lighter palette of whites, oranges and blues. It’s a home that, above all, is meant to be lived in, and so it’s designed to suit his every need (and interest).

Check out more photos of the Notting Hill mansion below:

Another view of the pool room  James McDonald

One of the bedrooms  James McDonald

The bar, which is made with a green malachite stone  James McDonald

One of the bathrooms