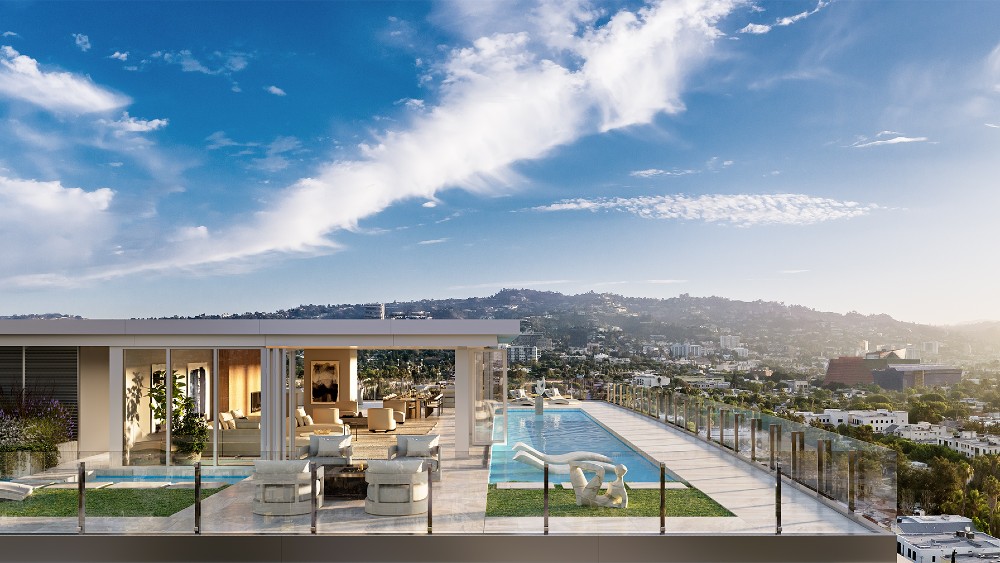 From ornate mansions in the hills to sleek downtown high-rises, lavishly designed and highly priced homes reign supreme in LA. But now, one of the world’s top luxury hotel hotel chains may just break records on both fronts with its newest branded residential listing.

With 70 percent of its 58 units already sold, the Four Seasons Private Residences Los Angeles, which was developed by Jonathan Genton, is already notable for being the brand’s first North American standalone (meaning, hotel-free) Four Seasons residential project. This week, the 12-story property near Beverly Hills made news again by listing its extraordinary two-level penthouse for $75 million—a record price for LA condos.

That top-floor residence spans across 13,000 square feet and offers a layout inspired by the modern Case Study Houses built for post-war living between 1940-1960. For a bespoke touch, the buyer will be able to customize the space and decide exactly how many beds and baths they’d like to be created.

Genton revealed to Robb Report that, along with an open-concept floor plan, “the unit includes a private 9,788-square-foot rooftop garden oasis” with reflecting pools and a terrace providing 360-degree panoramas of the city. You’ll even have direct elevator access to the space, as well as your own private six-car garage.

If (or rather, when) sold for the asking rate, its towering price tag will shatter the current $35 million record for a closed condo in the area, Genton told The Wall Street Journal. That record was set in 2010 when a penthouse at the Century, a high-rise in Century City, was purchased by Candy Spelling.

If you’re interested but the price makes your head spin, though, don’t fret: The property has other units available starting at $3.25 million. The average residences have a span of more than 2,400 square-feet and include retractable doors, outdoor terraces with gardens and professional-grade gourmet kitchens with Gaggenau appliances. Your ensuite bathrooms will feature high-quality materials and fixtures that create a spa-like vibe, while the primary bathrooms will include deep soaking tubs, separate glass-walled showers and dual vanities crafted from marble. Best of all, you’ll also have your own private garage in the underground parking area.

The penthouse layout can be customized to the buyer’s needs.  Four Seasons Private Residences Los Angeles

Genton notes that the building’s standout shared amenities will include “an indoor-outdoor Harley Pasternak-designed fitness and wellness center, a private training room, a tiled saltwater pool with zero-edge design and private cabanas equipped with ceiling fans.” Not to mention, there’s also an immersive IMAX Private Theatre Palais experience on-site with a 17-foot screen and seating for up to 18 people.

“At the time of inception, there was no project like the Four Seasons Private Residences in Los Angeles, one that would be coveted by global residents and sophisticated domestic buyers,” says Genton. “(It) offers prime real estate in a premier location.” Situated on 3rd Street near the Beverly Center and across from one of LA’s two Four Seasons hotels, the property was born out of the brand’s global residential strategy to extend its luxury lifestyle experience by managing homes in popular locations. While Four Seasons currently has  47 branded residential properties open across the globe, from Asia to the Middle East, standalone projects like this help the company extend its reach and act as a compliment to the mixed-use properties, while still offering world-class design, hotel-style amenities and five-star service.

More simply, as Genton puts it, the aim for the new US residences is to offer prime real estate in a coveted area to “those who wish to experience privacy and exclusivity on a daily basis. We have seen increased interest for branded residences in the city as service, luxury amenities, privacy and security become increasingly important to discerning ultra-high net worth buyers. The pandemic put things in perspective for many people and we’re seeing more sophisticated buyers who don’t want to compromise on the absolute best for their families.”

For more information on all of the listings at the Four Seasons Residences Los Angeles, visit the company’s website.

Check out more images of the building and amenities below: