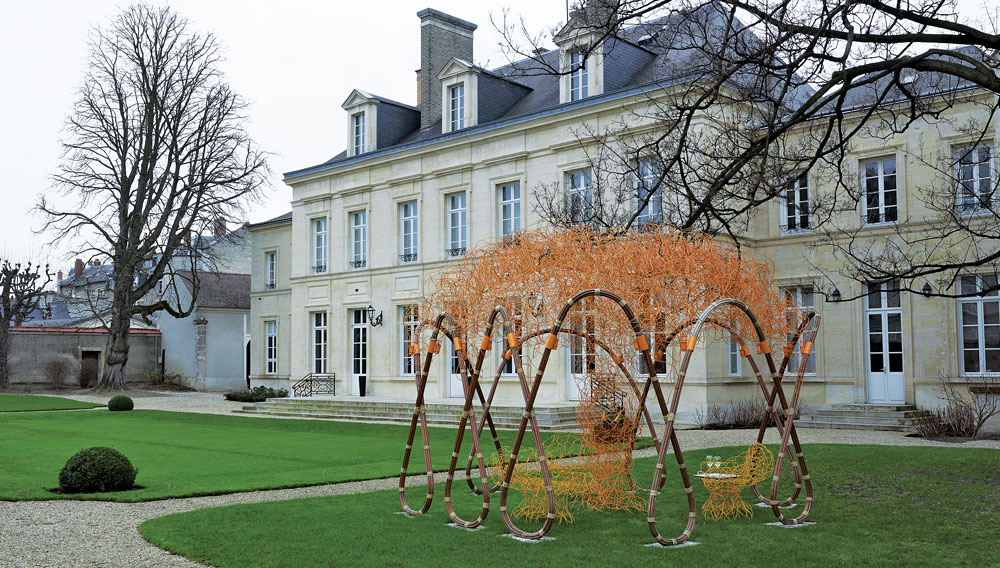 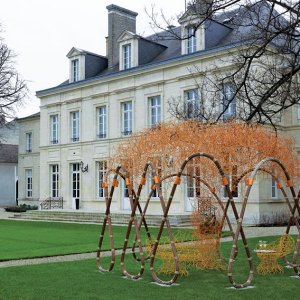 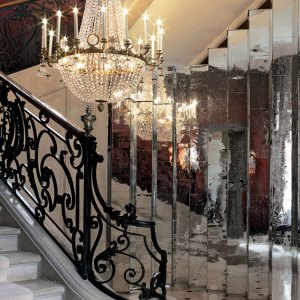 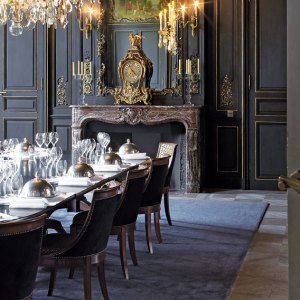 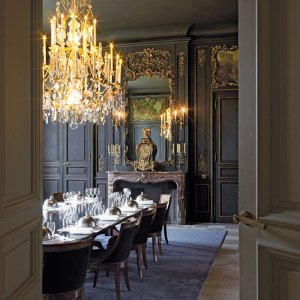 We are à table in the dining room of Hôtel du Marc, the Champagne house’s private residence in the center of Reims, where Moinard, the prominent French designer, has completed a dramatic four-year renovation. The dining room is one of his boldest strokes of genius: The boiserie and ceiling are coated in an obsidian lacquer, and overhead an enormous gilded chandelier gleaming with pendants of cut smoked glass bathes our dinner companions in a warm glow. From within this circle of light, life and energy radiate as guests in black tie and evening gowns mingle, their glasses bubbling with copious quantities of Champagne.

This room exists to be toasted. For 125 years, Champagne lovers have coveted an invitation to Hôtel du Marc, where Veuve Clicquot entertains its top clients, associates, and collectors. When LVMH, the luxury powerhouse and parent company of Veuve Clicquot, decided to renovate the 1840 mansion, Belli says, “The idea was that this should not feel like a hotel but a home.” Design proposals ranged from a strictly accurate 19th-century restoration (sans chamber pots) to an ultramodern redo. In the end, the company selected Moinard—a man renowned for his ability to deftly merge the modern and the classic, the gilded and the minimal—to remake this jewel in the Veuve Clicquot crown.

Moinard, who began the project in 2009, specializes in sublime spaces, having designed the interiors of the Concorde; Paris boutiques for Cartier and Thierry Mugler; hotels, including Morgan’s New York; and numerous elegant restaurants and museums, not to mention private homes for Karl Lagerfeld, Jean-Paul Goude, and Pierre Boulez, among others. As has happened with so many of his commissions, history drew Moinard to Hôtel du Marc. “I love stories in general,” he says, “and Veuve Clicquot was a new story to me.”

Few tales are more compelling than the story of Barbe-Nicole Clicquot Ponsardin, the 27-year-old widow who, after her husband’s death in 1805, threw herself into the Champagne business and transformed the industry with the help of her chef de cave, Antoine de Muller. In the early 19th century, Champagne had yet to assume its preeminent place in the winemaking world, largely, Madam Clicquot concluded, because of sediment that made the wine cloudy. A lifelong insomniac, the widow set out to remove this obstacle to success. Her solution was to bore holes into a table to create what became known as the riddling rack, an invention that made the crucial process of ejecting sediment, called dégorgement, efficient and economical. Her creation revolutionized the business and gave rise to Champagne hangovers the world over. While she never lived at Hôtel du Marc, she built the home for her successor and heir, Édouard Werle, and the estate has been part of the Clicquot narrative ever since.

“For all my projects, I adapt the story and the code in the space,” says Moinard. For this property, that meant paying homage to the past by carefully preserving the house’s Roman stone exterior, including the bits of shrapnel that struck the facade during World War I. “This house is very classical,” Moinard says, “but at the entrance, I put one canopy with a small bubble in dark glass. And the door is made of the same glass that’s used for a Champagne bottle. This code is somewhat invisible, but it’s the beginning of the story.”

The references to winemaking become more perceptible inside, beginning with the imposing entry hall, where beveled panels of antique bubbled mirrors face the grand staircase, whose purple ombré rug and wall appear to have been deliberately soaked in Pinot Noir. At the crook of the staircase is a precariously low-hanging chandelier that gives this vestibule the air of a party gone slightly tipsy. “The wall, the glass, the chandelier—you have all the atmosphere in this space,” Moinard says. “For me, it’s the story of this classical, modern, elegant new house.”

The library contains souvenirs from around the globe, including a stuffed ostrich by Deyrolle named Nicole (after Madam Clicquot) and fitted with a saddle (a nod to the brand’s long-standing association with polo). Oversize portraits of Clicquot and Werle family members in glowing frames douse the upstairs hallway with yellow light. In the “summer” bedroom—one of six bedrooms in the house—Moinard placed the one piece of furniture that Madam Clicquot’s hands certainly touched: a leather-topped writing table.

Among the works specially commissioned for the house are Once Upon a Dream by Mathieu Lehanneur, a whole-room, space-age sleeping chamber that seeks to relieve jet lag (a subtle allusion to the widow’s insomnia), and a Pablo Reinoso–designed bench whose slats extend from one end, like twisting branches of a vine, toward a nearby hallway window. “The key to this house,” Moinard says, “is blending the old with the modern and keeping it from being too serious with touches of whimsy and homages to Champagne.”

The neon-red outline of The Chandelier, a light sculpture by Anne Marie Jugnet and Alain Clairet, illuminates the residence’s most versatile space, the atelier. Here, a movable kitchen allows chefs to prepare, cook, and assemble food in front of the guests; when this amenity is whisked away, the atelier becomes the playful den, fun house, and tasting room of Hôtel du Marc. The massive Champagne library—a nearly 6,500-bottle collection of Veuve Clicquot, including rarities such as Clicquot Werle Blanc 1928 and Veuve Clicquot Rose 1947—is partly stored in the atelier’s stainless-steel wine chiller, created by Porsche Design Studio. Among the atelier’s other diversions are a grand piano, an impressive 10-person foosball table, and two movie screens.

Guests at Hôtel du Marc have included a Singapore-based wine collector who paid €30,000 in 2010 for a bottle of 1830 Veuve Clicquot salvaged from a shipwreck—a record for a single bottle of Champagne at auction. Another guest, polo player Nacho Figueras, attended a party for 40 that concluded with a concert in the atelier—during which, recalls Adélaide d’Orléans, the brand’s corporate communication manager, Fig­ueras was moved to serenade his wife with a Spanish love song. On another occasion, d’Orléans enlisted a French actor to give a poetry reading.

“Activities depend on who we are receiving,” says d’Orléans, who helps to orchestrate these experiences, matching each guest to one of the six bedrooms and choosing the dishes on the dinner menus, which are being developed in consultation with Yannick Alléno, a three-Michelin-star chef. Each course is paired with a different vintage of Veuve Clicquot Champagne specifically chosen by the winemakers, including chef de cave Dominique Demarville and senior winemaker Cyril Brun.

On the present occasion of the black-tie dinner for 12, La Grande Dame 1988 accompanies a lobster dish, while La Grande Dame 1989 lends nuance to the duck course. After the meal, the group retires to the atelier, where the 2004 and 2001 vintages of La Grande Dame are poured alongside a few spectacular desserts. A spirited match of foosball brings the evening to its close, as the sated guests wander up the wine-tinted staircase to their rooms.

For Belli, who oversaw the renovation project on behalf of LVMH, Moinard has created a house that captures the brand’s rich history—and adds an appropriate note of surprise. “We are thrilled with the changes and updates to Werle’s home,” she says, “and we know that both he and Madam Clicquot would have been very pleased.”

Before the redoubtable Madam Clicquot assumed control of the Champagne house so indelibly associated with her remarkable personality, her father-in-law, Philippe Clicquot, declared his intention to make his wines famous throughout France, the kingdoms of Europe, and beyond. Beginning in 1772, he made good on his word, sending bottles of his Champagne to Paris, Rouen, and Bordeaux, as well as to Venice and Switzerland. By 1777, he was supplying wine to the caterer of the Austrian emperor’s Hungarian Guard, and by the 1780s, Clicquot’s Champagne graced the glasses of nobles in Moscow and Saint Petersburg.

Today the house continues to enjoy royal patronage, holding a warrant from the British Crown, and its releases remain regal in their splendor. The Veuve Clicquot 2004 La Grande Dame Brut ($165), for instance, reveals an aristocratic polish, coating the palate in a silky raiment of flavors, including poached pear, tangerine, jasmine honey, vanilla cream, and marzipan, beneath which broods a majestic minerality. Yet, if the house’s wines are said to possess a hierarchy, the Veuve Clicquot 1989 Cave Privée Brut Rosé ($245) outranks all comers. Part of an ongoing program of releases from the house’s 800,000-bottle library of older vintages, this stately Champagne has acidity as precise and thrilling as the voice of a coloratura soprano; a rich, meringue-like body; and exquisitely complex notes of coffee ice cream, candied cherry, vanilla, and orange pekoe spice. —Brett Anderson