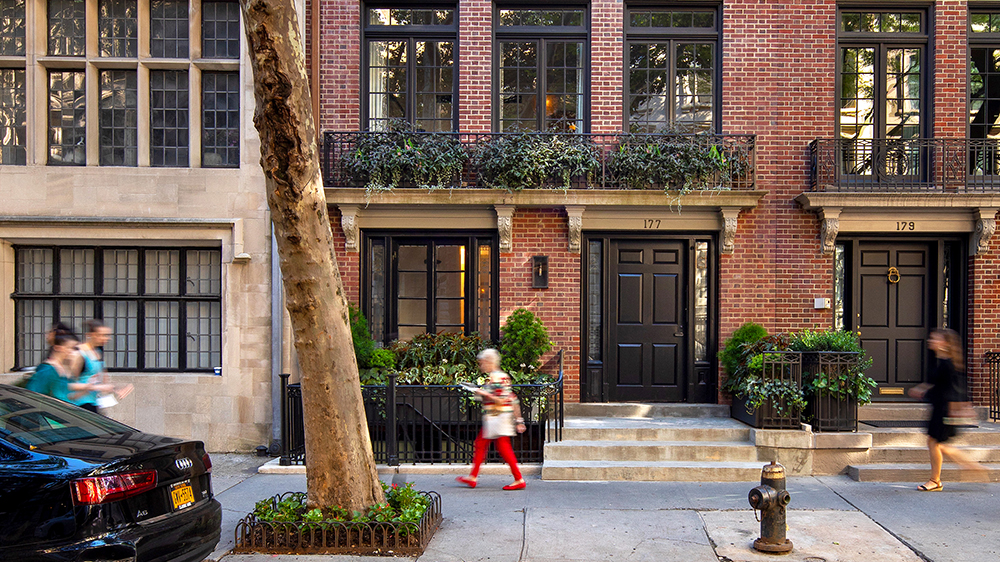 When a pair of art and design aficionados outgrew their penthouse and went shopping for a new Manhattan home, they took along a secret weapon: Deborah Berke, dean of the Yale School of Architecture. Or rather, as the elegant owner puts it, “We dragged Deb—”

The couple, who prefer to remain anonymous, have been friends of Berke’s for decades, and the architect designed their penthouse in the East 70s, which had outdoor space. Though committed urbanites—the husband insisted their new home be steps not only from a garage but also from a subway station—the two are nature-oriented as well. New York being New York, they were having trouble finding an apartment of suitable size for themselves and their daughter that also had a sense of warmth and serious outdoor square footage. “That’s when a house started making sense,” Berke says.

“We walked in here and my husband said, ‘Oh my God, a townhouse with light,’” the owner recalls, sitting on the 20-foot-long striped banquette in her enormous ground-floor kitchen, which, thanks to deft architectural handiwork, now features a striking bronze-and-glass wall overlooking a tiered garden. The couple bought the five-story, 8,400-square-foot brick house, dating to 1910, on a quiet block of the Upper East Side, then undertook a two-year renovation with Deborah Berke Partners. “It was a little messed up from its original bones,” the owner says.

For inspiration, Berke thought back to her childhood, when her cousins grew up in a Greenwich Village brownstone “cut up into lots of tiny rooms”—then did the opposite. “What does 21st-century family life look like in a townhouse in Manhattan?” Berke asks rhetorically. She made her modern intentions apparent right at the entrance: The brick facade gives way to a translucent vestibule. Stepping into the foyer, visitors immediately see the kitchen, which now dominates the first floor, and the garden beyond. A stark white ribbon-like staircase also sets a contemporary tone. “This is not traditional townhouse living,” Berke says. “There’s an open connection to the backyard—seen from the front door—a kitchen that functions almost as a family living room. You can hang out here all day. It feels much more open and flowing than the old-fashioned version.”

The owners wanted to use the whole house. To that end, a serving kitchen on the second floor, complete with a dumbwaiter, makes their frequent parties in the living and dining rooms practical affairs. “The dining room is a very comfortable room that can feel cozy or very grand,” the owner says. It’s anchored by a table designed for the couple by sculptor Edward Finnegan, another longtime friend. “We are passionate about collecting the work of friends. This is by David Novros,” she notes, gesturing over a Belgian brutalist buffet to a black-and-white geometric drawing he made for a large fresco in the early 1970s. “We own a huge amount of his work.”

The dining room is anchored by a bespoke table by Edward Finnegan.  Chris Cooper

As for the home’s decor, the owner explains, “This is a house with a minimalist and a maximalist.”

“And us in the middle,” Berke adds, “finding the balance.”

Having known and worked with the couple before, Berke and her team, which includes lead interior designer Caroline Wharton Ewing, were prepared for this particular marital dynamic. “He is very abstract and conceptual, and light is very important to him,” says Wharton Ewing. “She is all about form and texture and color and bolder moves. The house is a combination of quieter and bolder movements.” Wharton Ewing cites the living and dining rooms’ pared-down fireplaces as minimalist touches and the curvy, richly toned and textured Tacchini sofas by Gianfranco Frattini as a dramatic statement.

Berke and Wharton Ewing left virtually all the walls in the house free of texture and pattern, so as not to compete with the couple’s extensive and varied collections, ranging from iconic William Eggleston color photographs and other contemporary art to Hopi kachina figures, Navajo blankets and midcentury Italian lighting. Installing their art, the couple weren’t afraid of white space, leaving ample bare areas—sometimes entire walls—for individual works to breathe. “There isn’t one surface that isn’t considered,” Wharton Ewing says. “They both have a very discerning eye.”

The husband, for instance, carefully calibrated the lighting and designed the screen, fashioned from vintage Higgins glass rondelays, that makes the powder room, in Berke’s view, the “chicest in Manhattan.” His textile-buff wife, meanwhile, examined hundreds—“no exaggeration”—of carpet samples before hitting on the teal that now lines the staircases and master bedroom. “We had very different aesthetics, my husband and I, but over the years, we’ve learned to meld them,” she says. “Where we come together is the periods we love. Both of us have a passion for the ’50s, ’60s and ’70s.”

Some of the design flourishes, such as the Japanese-style mudroom, would no doubt have been a hard sell with less sophisticated clients. “There isn’t one nail in this whole space,” the owner says.

The more private quarters begin on the third floor, which is reached by the original staircase and houses the master suite. The bed is low and upholstered, the marble-and-limestone bathroom serene and the dressing room nothing short of spectacular. “This is embarrassing,” the owner says, walking into the huge space, which was formerly a library and where she now does Pilates. “I’m actually not like this.”

The fourth floor is primarily the territory of their teenage daughter, who led the minimalist-leaning design of her bedroom, bathroom, study and craft room, and mini version of her mom’s dressing room. On the fifth floor is a large, relaxed family room, furnished with a deep leather sofa and featuring a wall of books and a totem by landscape designer Roberto Burle Marx that he once kept in his garden. Guest rooms are on both the fourth and fifth floors. “We really wanted a place where friends could stay, because we have friends from all over the world,” the owner says.

A final, steep, narrow staircase leads to a tiny aerie—a place for the husband to escape and think—and a lush rooftop garden, planted with tomatoes, baby eggplant, peppers and herbs. (“I felt ridiculous last summer—I found myself driving from New York to East Hampton bringing vegetables.”) But unlike the backyard, where the owners often entertain, the roof is just for them. “We go up after work and have a drink together,” she says. “It’s really quite magical.”

Taking in the views, they can put their strong tastes aside, which may be for the best considering they have not yet finished decorating—and probably never will. “Until you move into a house, you don’t really feel its bones,” she says. “Then over time you keep adding.”

Check out more photos of the townhouse below:

The dining room table by Edward Finnegan is surrounded by Patricia Urquiola chairs. The wall relief is by Karin Waisman.  Chris Cooper

The master bedroom features a bed by Giuseppe Viganò, a Vol pendant light by Vibia and wallpaper by Phillip Jeffries.  Chris Cooper