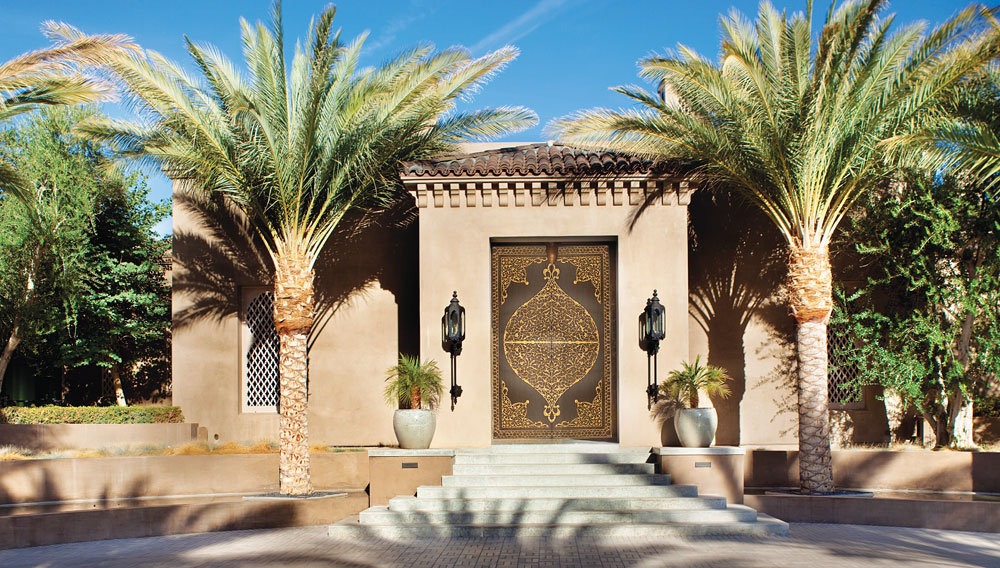 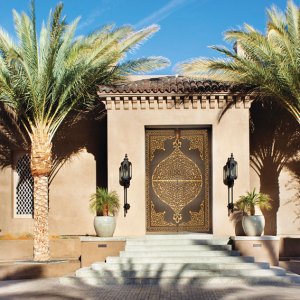 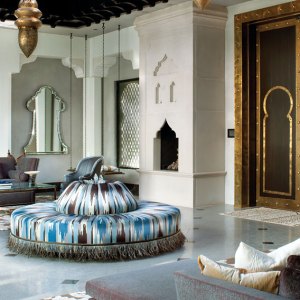 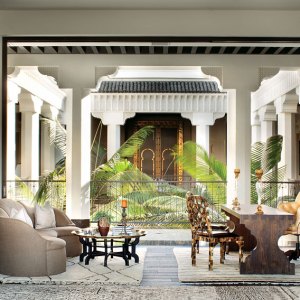 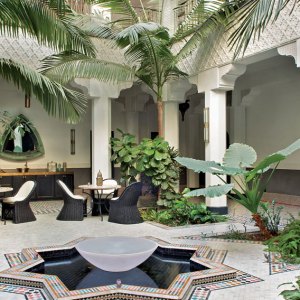 When a chicago-based real estate investor and design aficionado first visited the site for her winter residence at the Bighorn Golf Club in Palm Desert, Calif., her architectural vision was clear. “I immediately knew I wanted a traditional Moroccan riad here in the desert,” says the homeowner, who has remodeled several of her own houses—including her Cape Cod–style main residence outside Chicago and her mountain-style summer cabin in Montana. For help in realizing her vision, she called on Palm Desert–based architectural designer Gordon Stein. He conceptualized a four-bedroom, seven-bathroom main house and a one-bedroom guesthouse—16,800 square feet in all—where the owner wintered for the first time in 2011.

Flanked by date palms trimmed Moroccan-style, custom brass-on-steel doors provide entrée to the grand reception room. “I stole the ceiling motif from a house that designer Alberto Pinto did in Morocco,” the owner notes of the space, where stars and other design elements set a tone of tradition and sophistication.

Holding Court | The home’s footprint mirrors that of a riad, with most of the rooms, including the library/office, opening onto the arcade that surrounds the large central courtyard. Like other spaces in the house, the room holds contemporary and antique furnishings from local shops and from the homeowner’s trips to Morocco. She traveled once with the architect for inspiration and then made several subsequent trips to acquire furnishings for the property. The library’s rugs are from one such visit, while the desk chair is from Phyllis Washington Antiques, and the desk is by Gregorius Pineo.

Situated beneath the library is the spa, which is based on a Moroccan hammam. The owner found the chair at a garage sale, the pouf at Trestle Home in Palm Desert, and the painting on a trip to Morocco.

For the open courtyard, she asked for retractable ceiling panels of screen and glass. Stein conceptualized them, and the home’s builder, Thousand Palms, Calif.–based RAM Development, engineered the feat of installation. “The glass roof is just phenomenal—it’s really the wonder of the house,” says the owner. Local firm Teutle landscaped the courtyard, as well as the rest of the property. The courtyard’s floor and central star-shaped fountain were tiled by Moroccan artisans from the Washington, D.C.–based firm Arabesque, which worked on the galleries for Arabic art at New York’s Metropolitan Museum of Art.  “[They] laid every one of those thousands of feet of 2-inch tiles by hand,” she says.

Material Witness | In the family room, which looks through Moorish horseshoe–style arches to the lap pool and the mountains beyond, the homeowner incorporated modern elements such as a white silk-and-cotton rug she purchased in Montecito, Calif., and a silver ottoman she found in Marrakech. The finish on the fireplace is jade-colored tadelakt, a Venetian-style Moorish lime plaster with natural pigments. “After it is applied,” says Stein, “the tadelakt is rubbed with black soap, at which point it takes on the appearance of marbleized leather.”

The family room flows into the arcade, where arches, a Jerusalem marble floor, and colorful zellige wainscoting further the Moroccan aesthetic. “The beautifully handwrought iron window screens found in Marrakech, [called] claustras, inspired the designs for the balcony railings,” says Stein. To help guide the railings’ creation and the home’s overall architectural design, notes the owner, “Gordon took hundreds of pictures on our trip to Morocco.” The mahogany door (at left) opens to the powder room, whose dark wood echoes the arcade’s ceiling. Just past the door, an intimate bar is tucked behind a recess. The cashmere sofa is from Baker Furniture.

French Curve | “The French influence is strong in Morocco,” the homeowner says, “as [France] had a presence there for a long time. In the kitchen, we tried to reflect some of the French elements found in the more modern riads.”

The open-plan space follows the curve of the outdoor living area, which is accessible through the double doors. (A service kitchen is tucked behind this one to the right.) The owner had the carved-mahogany cabinet custom made to conceal a Thermador refrigerator and freezer—“I wanted [the room] not to look a lot like a kitchen,” she explains—and she designed a shapely center island to contain the La Cornue range.

The formal dining room includes steel-and-glass French doors that open to an outdoor terrace off the kitchen. “I liked the dramatic contrast of light and dark for this room,” says the owner, who conceived the design for the cotton-and-linen tented ceiling, from which hangs a contemporary pendant lamp by Murray’s Iron Works. “The ceiling’s diaphanous draped fabric evokes the feeling of dining in a modern Berber tent,” says Stein.

Master Class | The master bedroom is a lesson in centuries-old surface techniques. “The bed alcove features a traditional method that produces a lacelike surface from carved and shaped plasterwork of intricate, interlocking forms,” says Stein. “Most of the tadelakt was done in Morocco, then shipped over in containers,” adds the homeowner. “Once it was here, the artisans had to match it and get rid of all the seams, which took hours. They’re extremely detailed and organized.” (To show her appreciation to the artisans, she took them out one evening to a movie. “She came to pick them up,” recalls Stein, “and they were all wearing suits.”)

For the master bath, which opens to a tiled outdoor shower and private garden, Stein designed a painted-wood mashrabiya screen that allows light to filter into the more private bath areas. The tub, by the Spanish designer Jaime Hayon for Bisazza Bagno, is from Hydrology in Chicago. The homeowner brought new life to an old chair by covering it in Mongolian lambswool and spray-painting the legs silver. The doors and skylights are by (ARC)form.

Breaking Form | A stylistic departure from the home’s Moroccan aesthetic, the outdoor living area is a colonnaded nod to Roman architecture. “The loggia floor surface is intended to merge seamlessly with the water, and the immersion of the classically designed pillars accentuates that effect,” says Stein. The homeowner furnished the space—which her two grown daughters, friends, and extended family often use—with pieces from Kettal, Dedon, and the Palm Springs, Calif., shop Interior Illusions. Cahuilla Pools gave the circular swimming pool a Baja shelf for in-water lounging.

“I’ve done every interior style, from country French to ultra-über-modern,” says the owner. Now, with her finished Palm Desert estate, she can add Moroccan (with a dash of Roman) to that list. “To see it go from a plot of sand to this beautiful riad was pretty amazing,” she says, adding that her version of the traditional Moroccan house is an ideal fit for the neighborhood. “This community strides for uniqueness in architecture, and this house is definitely unique—there’s nothing like it here.”