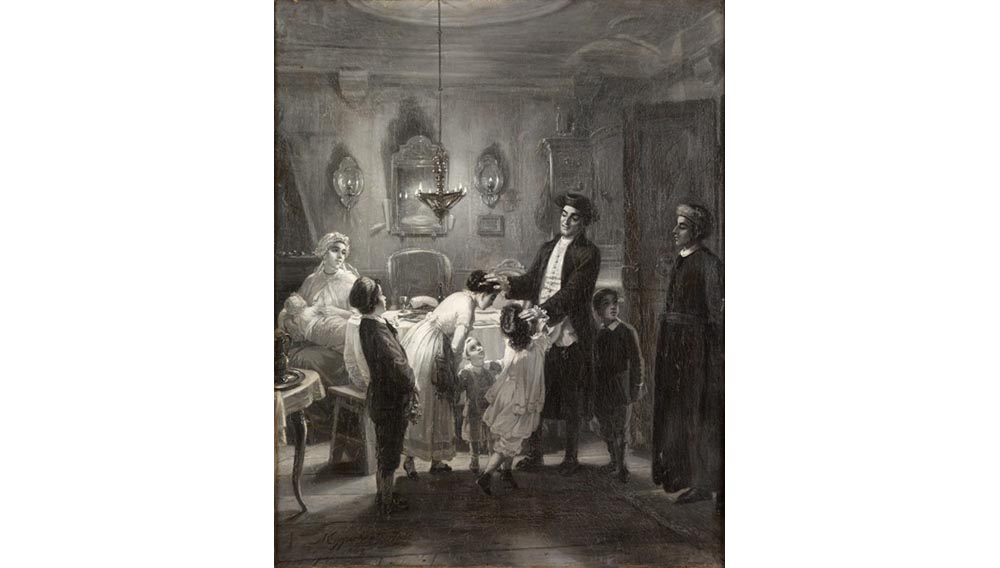 New York, NY (November 2, 2015)–A rare, 1867 oil painting by Moritz Daniel Oppenheim; a classical, c. 1895 oil painting by Lazar Krestin; a 1912 charcoal-and-wash drawing by David Bomberg and a modernist, c. 1990, oil painting by Moshe Kadishman are among the featured lots to be offered for sale in 150 Years of Jewish Art at Kestenbaum & Company in New York City on December 16. Thirty works of art will be included in the auction, the company’s fourth of the year.

“The pieces of art that will appear in the auction represent the arc of the Jewish experience and material culture in the last 150 years of art history: from the traditional 19th-century oils to early 20th-century European art, Holocaust-era artwork from concentration camps to early State of Israel to modern Israeli art, and contemporary American, European and Israeli oils and mixed-media examples,” said Daniel E. Kestenbaum, chairman of Kestenbaum & Company.

The auction’s most significant lot is a work by one of the foremost nineteenth-century Jewish artists, German-born Moritz Daniel Oppenheim (1800-1882). Known for his series of twenty oil paintings, Scenes of Old Jewish Family Life, many of which included events from the Jewish life cycle as well asSabbath and festival observances and are in permanent museum collections around the world, this painting has been little seen. Friday Night Blessings (Freitag Abend )(1867), a stirring oil on canvas painted in the grisaille method (paintings executed in shades of gray to facilitate photomechanical reproduction), depicts a family scene at the Sabbath table in which the father is blessing his children and is rich with Jewish symbolism throughout the painting. Previously exhibited at The Jewish Museum in New York City from 1993-1995 and the Jüdische Museum Frankfurt from 1999-2000, this work is consigned from a private collection in Phoenix, Arizona, which has owned the painting for generations. Its sale estimate is $300,000-$500,000. Prior to its sale, Friday Night Blessings will be exhibited from Sunday, November 8, through Friday, November 20, at the Leo Baeck Institute at the Center of Jewish History, located at 15 West 16th Street, New York.

“Bringing this rare Oppenheim painting to sale is a significant moment in the Jewish art world,” said Abigail H. Meyer, head of the ceremonial objects and fine art departments at Kestenbaum & Company. “This painting of Friday Night Blessings is the original from the Scenes of Old Jewish Family Life series of twenty grisaille oils from which subsequent prints were reproduced and has rarely been on public display.” Ms. Meyer added, “It is most unusual for two Oppenheim paintings to come to auction in the same year; this one, however, is of a much more iconic, emotionally evocative subject matter that is typical of the artist.”

“In this firm’s history we have sold many treasured and historically-important rare books and manuscripts, and we are overjoyed to now offer a work of art of this caliber,” added Mr. Kestenbaum. “The Oppenheim is the ultimate in Judaica art.”

Another featured painting offered for sale is Portrait of a Rabbi (c. 1895) by the Polish/Austrian artist Lazar Krestin (1868-1938). The artist’s execution of his subject, which freely utilizes brush strokes of color and where the figure softly fuses with his surroundings, as might have been painted by Renoir, shows the French Impressionists’ influence on the artist in this portrait. Krestin, one of the most prominent students of the painter Isidor Kaufmann, is known for his many portraits and genre scenes of European Jewish life, much like his mentor. The estimated sale price for Portrait of a Rabbi is $6,000-$9,000.

A small (8” x 7”) charcoal-and-wash drawing by the English modernist painter David Bomberg (1890-1957), Study for Interior (1912) is the third highlight of 150 Years of Jewish Art. Born to Polish immigrant parents, Bomberg studied at London’s Slade School of Art through the generosity of the Jewish Education Aid Society. His pre-World War I art was influenced by Cubism and Futurism and utilized angular shapes and bold colors in a grid-like pattern as seen in Study for Interiors (i.e. Cubism’s forms and Futurism’s energy). The estimated sale price for this work is $3,000-$5,000. Bomberg was also a member of the short-lived, British Vorticism movement that similarly favored abstract geometric shapes. After his traumatic WWI experiences, however, he made a clear change in his artwork and favored portraiture and landscapes over his earlier “mechanized” art.

Exploding Colors (c. 1990) by Israeli artist Menashe Kadishman (1932-2015), an oil painting on canvas, is another featured lot to be offered for sale that is clearly influenced by the French Fauvist movement and specifically the art of Matisse; the work echoes the expressive use of flat planes, bold strokes and bright colors. Central to the composition is a sheep, a subject that the artist is well-known for representing in his paintings and sculptures. (Kadishman’s obsession with the biblically-alluded animal began while working as a shepherd during his post as a Nahal Brigadier in Northern Israel on Kibbutz Ma’ayan Baruch.) Symbolic in its representation of the Jewish People in countless Biblical and Talmudic references, such as the story of the sacrifice of Isaac and in the Rosh Hashanah and Yom Kippur liturgies, the sheep also bears contemporary relevance as it is also symbolic of the early pioneers—including Kadishman’s father—who built the modern State of Israel. On the verso of Exploding Colors, in an almost playful manner, Kadishman includes a second English and Hebrew signature and a cartoon of two sheep kissing beneath a bow and arrow. Exploding Colors’ sale price is estimated $2,000-$3,000.

A fully illustrated scholarly catalogue for 150 Years of Jewish Art is available for sale ($38 in the United States, $45 elsewhere; the price includes shipping). To order a copy, please contact Kestenbaum & Company. The catalogue will also be available for viewing online at www.kestenbaum.net.

Kestenbaum & Company is uniquely positioned to offer these fine works of Jewish art for sale. A New York City-based boutique auction house, the company is dedicated to the sale of rare books, manuscripts, autographed letters, ceremonial objects and fine art. With more than twenty years in the auction business, the firm is particularly renowned for its expertise in the fields of Hebraica and Judaica. Collectors, dealers, museum curators and acquisition directors around the world rely on Kestenbaum’s expertise and value its discretion and integrity. Kestenbaum & Company is the largest niche auction house in the United States having sold to date over 28,000 lots at auction of rare and antique Judaica, and in 2013 and 2015 it was named by Art + Auction as one of the “250 Best Auction Houses Worldwide.” Kestenbaum & Company is located at 242 West 30th Street, 12th Floor, New York, NY 10001. Phone: (212) 366-1197, email: Info@Kestenbaum.net.