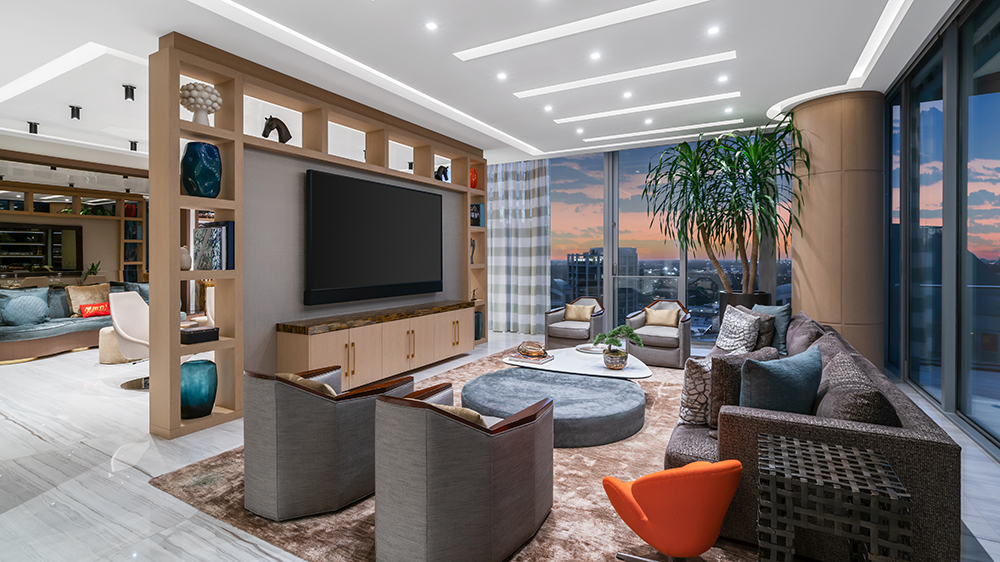 When the couple who purchased this Coconut Grove, Florida residence in 2016 moved to a more kid-friendly space, they opted to leave their Italian furnishings and enormous crystal camel behind. That works out well for the future buyer, as the apartment was meticulously designed from top to bottom by sought-after interiors guru Steven G. “The owners were very, very involved in the actual process,” he says. “They were very particular about their needs, wants and desires.”

The full-floor penthouse’s asking price is $24 million. That includes all the furniture, a 10,180 square-foot space, six bedrooms and seven-and-a-half bedrooms. It’s located in Grove at Grand Bay, a development that was designed by architect Bjarke Ingels. Grove consists of two 22-story towers that spiral toward one another; the penthouse in our sights is in the southern spiral. That’s an important distinction, according to listing agent Angel Nicolas, because a Mr. C Residences just broke ground nearby and will eventually block the north tower’s view. Oops.

The modern kitchen with new appliances.  Lifestyle Production Group for The Nicolas Group

The home’s wrap-around terrace features a small outdoor pool—it’s the only private one in the building. It’s a resistance pool with jets, so it’s both great for getting a few laps in and for relaxing, hot-tub style. Other unique elements include a wine cellar, which offers temperature-controlled storage and two home offices, which can be converted into additional bedrooms if work-from-home spaces aren’t needed. The couple added their artwork to the space, too, much of which they brought from Mexico—they have a home in Mexico City. A skull on a table in the living room, for instance, is from their collection.

The penthouse’s small outdoor pool that is the only private pool in the building.  Lifestyle Production Group for The Nicolas Group

Resident perks include access to Grove at Grand Bay’s amenity suite: A gym, rooftop pool, onsite art gallery and a club room among other, quirkier offerings like a pet spa. (No worries, there’s a separate, 1,700-square-foot spa for humans too.)

Best of all, since it comes fully furnished with pieces from big-name brands like Minotti and Meroni & Calzoni, you can move in and be relaxing with a bottle in front of Netflix in no time. “It makes it easier for the buyer,” says Nicolas. “All they have to do is bring their toothbrush.”