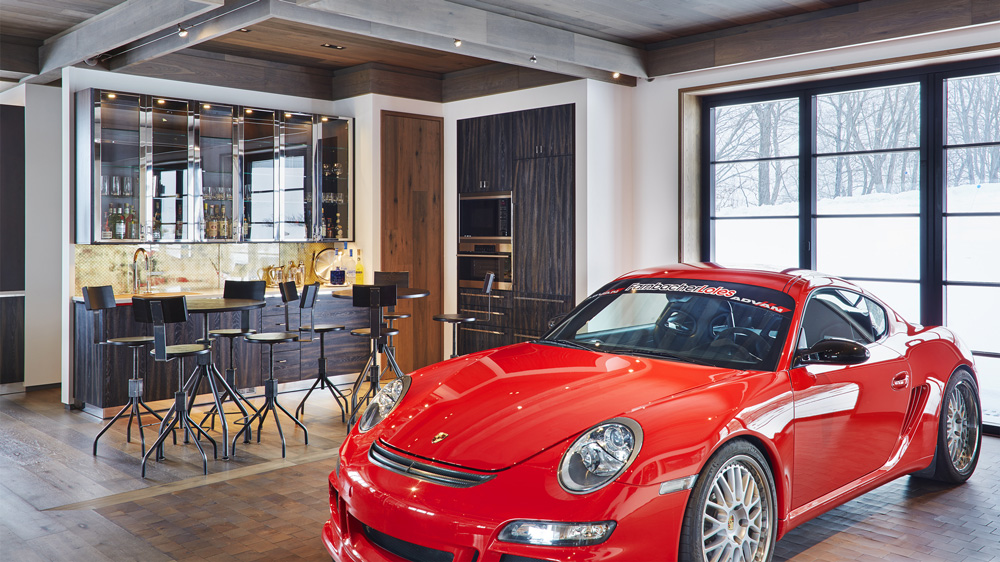 When Chicago-based Mick de Giulio ventured to a home in Minnesota located 45 miles east of Fargo, North Dakota, it was not for the garage. The highly regarded kitchen designer, whose expertise is sought for luxury projects around the globe, was originally recommended by interior designer Joan Hebert to create a kitchen. But the client also wanted his take on the detached garage—a straightforward, older, finished space that housed a few pieces of art and the owner’s small collection of cars and motorcycles. A modest spot to hang out with friends, it had 1,700 square feet of possibility.

Rather than a turbo-charged lair that flexed its muscles, de Giulio went the high-design route.  “With the cars and motorcycles planned for the space, it seemed natural to keep going with a more masculine feeling, but I thought to do something more sophisticated with sensual materials rather than raw and gritty, which is often the usual translation,” says de Giulio.

This interior-design plot twist was executed via de Giulio’s command of materials. Opting for dark cerused finish on the cabinetry—adding leather elements, mirrored stainless steel, and a light-gray wood finish to warm up the floors and ceiling—he found his desired contrast. To push the aesthetic forward, the team stepped up its design game in every direction. “Red oak was used for some of the cabinets. It’s perfect here,” says de Giulio. “We hand-scraped it and rubbed an aluminum paste into the open grain, which tied into the metals beautifully. Finishing methods like this are usually reserved for more exotic woods, but I think it’s interesting and unexpected here.”

A feature wall surrounding the fireplace is faced with brushed and polished Pyrite tiles from Ann Sacks. De Giulio chose to clad the hearth in quartzite named Bronzo, which gives a similar look to petrified wood, he says. And there were technical considerations. “We didn’t want the TV to cover the windows or tile, so it was installed in the ceiling with remote-controlled telescoping and folding hardware.”

Any space devoted to cars and hanging out with friends runs the severe risk of becoming a “man cave” or some other subterranean design punishment. Moving away from the cliché, de Guilio used the site’s location, copious natural light, and open layout to revise how the space performs its various roles—as a private hangout, a lounge, and, of course, a motor enthusiast’s favorite place. “I worked with architect Michael Abraham to rethink the windows and design an inside-outside fireplace and terrace,” says de Giulio. “The space no longer looks or feels like a secondary space.”

His kitchen plan showcases a few signature de Giulio moves. “The window in the bar area was lowered to the countertop, which is a detail I often do in the kitchen, and long glass doors were added all around. This gave us the inside-outside feeling I also will do for a kitchen. Additionally, we were able to have an exterior terrace with a fireplace that backs up to the interior fireplace.” The kitchen received the full residential treatment aesthetically (with a rather posh églomisé backsplash) and functionally, with a suite of appliances—refrigerator, wine and beverage cooler, and beverage drawers—by Sub-Zero, a Wolf Appliances microwave, faucets by Dornbracht, a Kallista sink, and de Giulio’s own hardware designs.