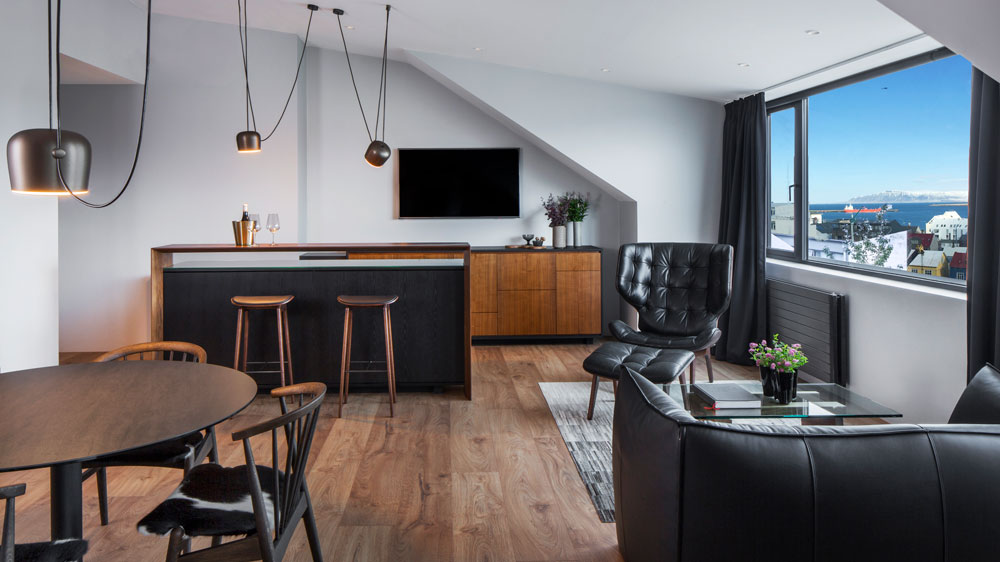 Iceland continues remind the world that not everything needs to be branded. One of the country’s most alluring qualities—second only to a staggeringly beautiful landscape—is that it’s perfectly content to be itself with zero pretense. That characteristic translates directly to design, which never quite separates from the country’s deeply affecting surroundings. The recently revised ION City Hotel in Reykjavík has that naturally cool-without-trying aesthetic courtesy of the minimalist design studio MINARC.

Based in Santa Monica, the firm is helmed by Icelandic-born husband-and-wife founders Tryggvi Thorsteinsson and Erla Dögg Ingjaldsdóttir. And they happen to also be childhood friends of the hotel’s owner. That familiarity engendered a successful first run with the ION group. “The owner wanted sustainable Icelandic design with comfort and function as a main focus,” says the duo. “Our first hotel collaboration with them, the ION Adventure, is located in a UNESCO natural park in the middle of a remote landscape in Iceland. With this newest hotel property, we wanted to bring nature into this urban property.”

A boutique hotel in a very hip city, Minarc could have chosen to create a bodacious space with high-wattage Insta appeal. ION City is located in one of Reykjavík’s bustling quarters with a slate of bars, cafes, restaurants, and, galleries that draw big crowds. That location could have led designers into obvious visual temptations, but Thorsteinsson and Dögg Ingjaldsdóttir deployed a striking, form-first, high-contrast aesthetic across the 18-room hotel and rooftop sauna, keeping the entire affair native and self-reflexive. “Iceland is full of contrasts and grace. That is absolutely where we get our inspiration from,” says the pair. “The beauty of Iceland and its amazing natural landscape is full of such visual contrast. We wanted to create a heightened experience for the clients and guests that will stay in their memories – that is the new luxury.”

While many lobbies fuss over making a big first impression, Thorsteinsson and Dögg Ingjaldsdóttir let the black, white, and gray palette serve as effective foil for a few considered custom designs—like the lobby desk, which the duo describe as a “faceted mass of white Corian, mimicking the Icelandic glaciers.” The stacked XitTables (which also make an appearance in certain suites) were designed by Minarc and built by Erla’s brother in native wood. According to the principals, each table “resembles a random stack of rough timbers and is a bit of an optical illusion, but don’t worry, the glass on top is not on crooked!”

The Dropi chair is an easy favorite —and a point of personal pride for the designers. A word meaning “drop” in Icelandic, the modern form is fashioned from molded metal and descends from the ceiling. “To us, it represents life…and where we come from.” ION City doesn’t ever abandon its sense of place, but visitors might also miss a few directly drawn lines, as Minarc is masterfully subtle with their interiors-as-narrative design. Basalt rock tiles coarse bathroom floors, while the shower walls have been given a fascinating treatment in obsidian rock and sand. “Erla was hiking the highlands of Iceland in Sprengisandur, a vast desert plateau situated between two prominent glaciers and she was so inspired by this unique landscape, she envisioned these murals on each bathroom wall,” says Thorsteinsson. “She installed each one-of-a-kind sculpture on the shower walls herself, crafted out of obsidian rock and sand.”

Similarly, the hallway—a generally prosaic space—features intersecting slits of light, inspired by the Icelandic countryside. Even without that context, anyone visiting sees it as just a cool effect. “It is a play on perspective – a little bit of magic to extend a relatively short hallway,” the designers describe. “Mirrors at each end transform a compact hallway into never-ending lava fields, with bold lighting effects representing the lava flows that break up the landscape filled with a whole lot of nothing.”

For the guest rooms, Minarc created the cozy, stay-under-the-covers kind of mood. The studio opted for classic, quiet look, knowing full well that the views of the North Atlantic Sea, the snow-capped mountains, and cityscape will draw most of the attention. The north-facing rooms feature upholstered blue window seats, echoing the ocean, while south-facing rooms have red sofas, a reference to the city’s skyline populated by corrugated metal roofs. The larger suites employ a few mid-century modern pieces that stop well short of a full-on onslaught. Warm, familiar woods like white oak and walnut have an easy repartee within each environment, and select rooms have chairs by late Icelandic designer Sveinn Kjarval. The studio also designed a mohair blanket, inspired by traditional Icelandic weaving, for every bed.