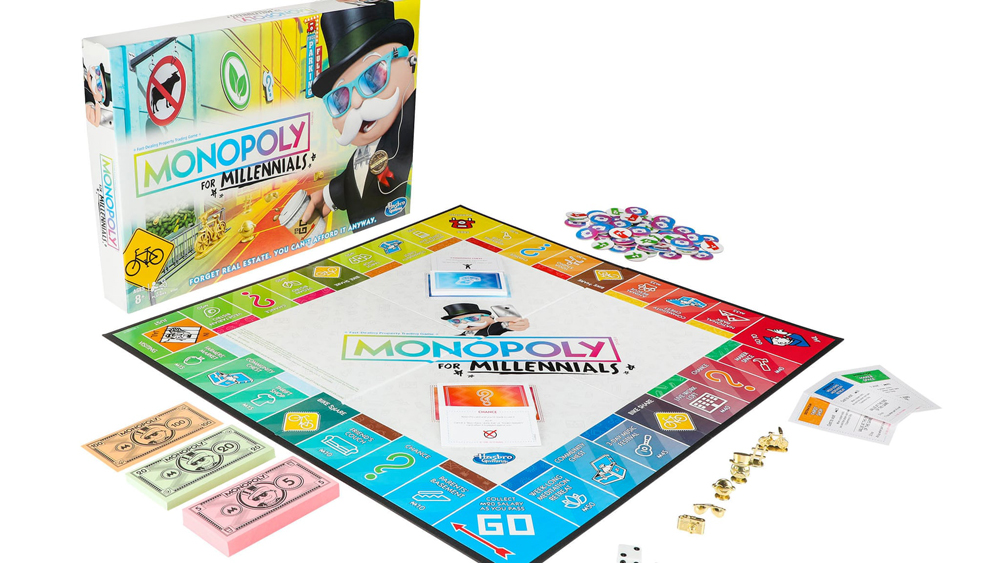 Millennials do not want to Pass Go, apparently—at least when it comes to America’s most classic board game.

That’s because “Monopoly for Millennials,” the 83-year-old game’s latest incarnation, is not just geared towards 20- and 30-somethings; it seems intent on trolling them. The game box comes packaged complete with a snarky tagline: “Forget real estate. You can’t afford it anyway.” Mr. Monopoly, the game’s iconic mustachioed character, sports a participation medal while holding a latte, wearing headphones, and taking—what else—a selfie. But unlike in the classic version, cash does not win the day in this game. Rather than buying Park Place, you win “Monopoly for Millennials” by collecting experiences, such as going to a meditation retreat or dining at a vegan bistro. As an added touch, the classic game avatars have been updated with generationally appropriate models—like a crying emoji and a hashtag symbol: #ByeFelicia.

But the attempt at cheeky humor isn’t exactly winning over its target audience, according to NBC News. Millennials appear to not like being trolled by a game invented for the Interbellum Generation. More than a few took to Twitter to air their grievances with Monopoly’s parent company: “@Hasbro Can you provide the URL for the Hasbro-official website featuring “Monopoly for Millennials,” where you trash on my age demographic because baby boomers caused an economic catastrophe that rendered us financially impotent for a decade? Thanks!” read one tweet from Steven Briggs (@TrnDaBeatAround).

Another Twitter user, Ma Lo (@squaretrex), also clapped back at the company, tweeting, “@Hasbro THE REAL JOKE IS WE CANT EVEN AFFORD YOUR SH***TY A** GAME #MonopolyforMillennials”

Somewhat ironically, millennials are actually one big reason that IRL homeownership rate has increased in the last year, according to Business Insider. Homeowners under the age of 35 have increased the most of any age group in recent years, from 36 percent in 2016 to 34.7 percent in 2017. In fact, the trend has been the most pronounced in smaller cities like Birmingham, Alabama and Buffalo, New York.

As for the game, so far, “Monopoly for Millennials” doesn’t appear to be too offensive or too expensive to deter sales. The $19.82 board game has already sold out at Walmart where it is being offered exclusively. And used versions are already selling as high as $54.94 on eBay, proving that there are plenty of people who appreciate the joke.

And, of course, not all millennials are offended by a little ribbing. A tweet from Southern Belle Annie (@hotsouthernmess) read, “So @Hasbro is totally trolling #Millennials and I am here for it!!! Yes, this is a real #Monopoly game. The monopoly guy is wearing a #ParticipationTrophy and holding a #Latte I can’t even!!”

So @Hasbro is totally trolling #Millenials and I am here for it!!! Yes, this is a real #Monopoly game. The monopoly guy is wearing a #ParticipationTrophy and holding a #Latte I can’t even!! 😂🤣 pic.twitter.com/YvOaPtf9E2