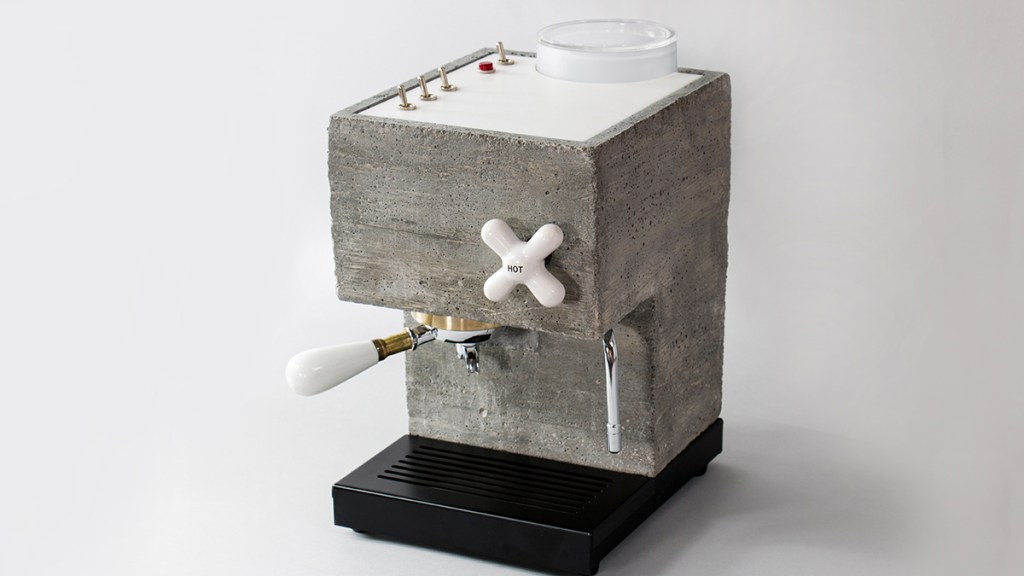 Just when you made that half-hearted commitment to drinking green tea.

Stylish espresso machines have always captured our attention. Admittedly, this fascination is often beauty-based, because design is not searching for love in the library. The AnZa espresso machine earns a proper second look, and it just happens to be the first crowdfunded gem we’ve stumbled upon in this category.

A project that started nearly five years ago between Montaag design studio and an espresso repair shop that goes by the name of Kanen coffee, (both happen to share a space in Berkley, California), AnZa emerged from the shared desire to give an aesthetically exciting lift to the typical appliance. Considering that most kitchen counters house a black or stainless-steel number, Montaag went on a freefall tactile mission to salvage yards and workshop in the San Francisco area, searching for a material that would support production and embrace the semi-radical notion of an appliance that could be seen as a sculpture.

Ultimately, they turned out two editions—one in concrete and another in Corian. “There has been surprisingly little innovation in the world of espresso machines, despite our obsession with interior architecture and kitchen design,” according to the company’s Kickstarter and Indiegogo stories. “AnZa’s added value comes from its material choices and accessible functionality.”

The ceramic plate and metal buttons have a clean effect.  Courtesy Montaag

The multidisciplinary studio has offices in Norway and California, and a clear devotion to minimalism. The concrete AnZa has been described as Brutalist, wearing it’s raw, industrial style without a care for traditional codes of conduct. Both versions feature clean details like ceramic and brass steam knobs, polished metal buttons with a vintage vibe, clear glass water tanks and black or wood/brass dip trays. The studio also sought to make an espresso machine that performed professionally and functioned seamlessly for the owner without barista training.

After a successful run on both crowdfunding platforms, Montaag recently mentioned the AnZa is in pre-production. The team told Robb Report they are working with manufacturers to ensure “the translation from to design to prototype is spot on.” When it’s ready to debut, each machine will retail for $1,300, but interested investors can reserve their machine for $799. As always, membership has its rewards, and those willing to give at a certain level can expect a special espresso blend and a concrete tamper, for pressing espresso grounds.

Until models are released, we’ll be awaiting a fresh cup just in time for deadlines.