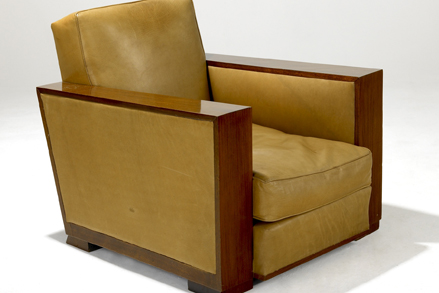 New York interior designer Juan Montoya, recognized for his bold modernist style, will sell a selection of his personal mid-20th-century furniture and decorative arts collection at Rago Arts & Auction Center on April 26. Montoya’s 85 lots, which consist of mostly French Art Deco pieces he collected over the past 15 years, are part of Rago’s two-day modern sale that starts April 25. Included in the Montoya lots is a modernist desk by René Herbst, the base of which is made from a single curved piece of mahogany, expected to sell between $15,000 and $25,000, and a Paul Rudolph tubular chrome and acrylic rolling armchair with an estimated value of $6,000 to $9,000. The auction will comprise works from George Nakashima, Wendell Castle, and Paul Evans, whose custom double-sided screen is expected to be sell for $60,000 to $90,000. Sales start at 9 a.m. April 25 and 26 at Rago Arts & Auction Center in Lambertville, New Jersey. (www.sollorago.com)