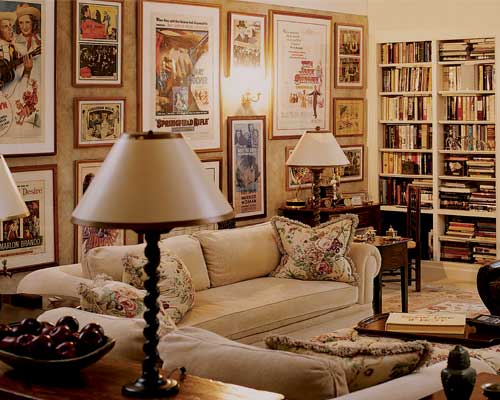 When Kate Edelman Johnson was growing up, she did not need 3-D glasses to make movie stars spring to life. Gary Cooper, Kirk Douglas, and Merle Oberon were just a few of the screen idols who worked

with her father, Louis Edelman, a prolific producer of films and such television shows as Make Room for Daddy and The Big Valley. Edelman Johnson became a producer herself, and she maintains global syndication rights to her father’s enduring TV series.

As befits a scion of Hollywood, she spent much of her childhood in a Georgian-style home designed by Paul Williams, one of Southern California’s foremost architects. His gracious, restrained style helped shape the look of Beverly Hills, and he had close ties to Edelman Johnson’s family: He worked on many projects with her grandfather, who was a builder.

So it was no coincidence that when Edelman Johnson went house-hunting in Beverly Hills after spending 20 years in New York, she was immediately drawn to a 1933 brick cottage with leaded windows, designed by Williams. “There was just a charm and a warmth and a graciousness of living to his homes,” she says.

Creating a nest was imperative because her new husband, Deane F. Johnson, another Southern California native, was retiring after a distinguished career as an entertainment attorney and president of Warner Communications and Time/Warner. He had been diagnosed with Alzheimer’s disease, and as he told his wife, he wanted to go home.

The couple had two apartments in New York, a house in Southampton, and a working cattle ranch in Colorado. Their return to California in 1997 involved streamlining their life. They held on to one of the New York apartments and consolidated the contents of the other three residences in the six-bedroom cottage in Beverly Hills.

Doing so involved pulling together several disparate styles: Victorian, country French, and Upper East Side formal. The task fell to Lynn K. Jacobson, a New York interior designer who has decorated all of Edelman Johnson’s homes as well as projects for the Duke and Duchess of Windsor and media mogul John Kluge. Jacobson’s assignment also included incorporating the collection of important 18th-century French furniture and decorative arts Johnson had assembled with his second wife, Anne Ford Johnson, as well as his 18th-century English watercolors and drawings.

Jacobson knew that Edelman Johnson wanted a home that was elegant but livable, a place where her husband could comfortably live out the beginning of their marriage and the end of his life. “I can crawl inside Kate’s head, and she can tell me some things, and then I know just what she wants,” Jacobson says. “It’s about making the house warm and fun and people-friendly. It’s about being comfortable and easy and letting dogs and children play in a living room with priceless works of art and fabulous French furniture.”

After her husband’s death in 1999, Edelman Johnson honored his memory by establishing the Deane F. Johnson Alzheimer’s Research Foundation. Five years have passed, and now that she is living with actor Burt Reynolds, she is ready to move on and is selling the house and its contents to benefit the foundation. Christie’s New York will include the furniture in its Important French Furniture sale October 21; some of the paintings will be in its sale of 19th-century European art on October 27, and some in its Old Master Paintings sale January 26, 2005. Christie’s will sell the drawings in London at the British Art on Paper sale, November 18.

The jewel of the paintings is an early work by Jean-Honoré Fragonard, La Charrette des Roses. Facing it across the room is Roses dans un Vase, a still life by 19th-century French artist Francois Bonvin. The room is the quintessential blend of fine art and inviting clusters of deep-cushioned seating. Signature Paul Williams touches are everywhere, from delicate carved linen-fold oak paneling to pocket doors with leaded glass panes.

Jacobson unified the different styles of furniture from previous homes by reupholstering them in variations on Deane Johnson’s beloved red. Among the Chinese objects that form a counterpoint to the French treasures are a 17th-century porcelain figure of a mountain goat and lobed dishes from the late Tang Dynasty. In the dining room, the other area used for formal entertaining, Portrait of an Old Man by Adolphe-Felix Cals overlooks an 18th-century French dining table surrounded by Louis XV chairs. On display near the doorway is an Edelman family heirloom: a signed tea service made by Black Starr & Frost (later Black Starr & Gorham), which is one of only two known sets in existence.

The rooms designed for daily living are casual but still elegant. The cozy breakfast room off the kitchen, where Edelman Johnson and her family gather around the solid 18th-century English gateleg table, features a collection of Italian majolica and 19th-century French faience.

True to the couple’s Hollywood ties, the heart of the house is the screening room downstairs. The room is a repository of memories: Lining the walls are framed posters of Lou Edelman’s films. One, for A Streetcar Named Desire, honors the time when Deane Johnson moonlighted as a producer on the classic film in 1951.

“All these things my husband collected were things that he loved,” says Edelman Johnson. “And I knew that he wouldn’t remember any of it for long. So for the short period of time we had him with his memory, we wanted him to be part of this process. This house was for that time and moment in my life.”