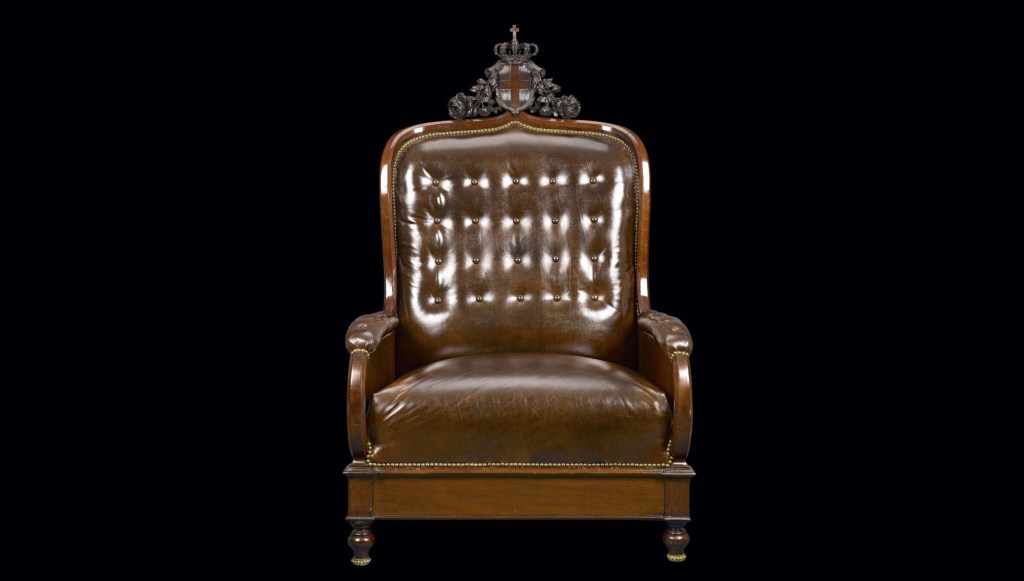 The King of Italy's Throne Chair

This incredible Bergère armchair was made for the King of Italy, Victor Emmanuel II, who ruled from 1849 until his death in 1878. Used on the King’s personal train, this magnificent seat served as his majesty’s throne. Crafted of sumptuous Cuban mahogany and upholstered in leather, this armchair is surmounted by the coat of arms of the House of Savoy, the Royal House of the Kingdom of Italy and one of the oldest royal families in the world. In the 1860s, the King had his private railway cars remodeled with French furnishings by L’Orme and Buire, the firm to which this throne chair is attributed. The stylistic taste of this chair is French Revivalist, reflecting the bold, strong designs inspired by the Renaissance. The Bergère form, or enclosed and fully upholstered French armchair, displays the solid rectangular features that characterize these resplendent seats during the 19th century. Set apart by a brilliant provenance and outstanding craftsmanship, this grand armchair remains in excellent condition.

Victor Emmanuel II (1820-1878) was the eldest son of Charles Albert, Prince of Carignano and Maria Theresa of Austria. Styled as the Duke of Savoy and later King of Sardinia-Piedmont, Emmanuel became the King of Italy on March 17, 1861, the first king of a unite Italy since the 6th century. His support of the Risorgimento Italian unification movement of the 1850s and 60s made him one of the most highly respected and supported rulers of his time.

This important throne chair was featured in the December 2, 2004 auction entited Provenance Royale at Sotheby’s, Paris.

M.S. Rau Antiques has been a French Quarter landmark for over 100 years, earning the trust of discerning antiques collectors worldwide.  Their 25,000 square foot gallery overflows with remarkable collections of fine art, exquisite jewelry and, of course, exceptional 18th-and 19th-century antiques, and owner Bill Rau’s highly trained staff of sales associates, research associates and support personnel are second to none. M.S. Rau Antiques’ primary mission is to provide their customers with an unparalleled shopping experience, a mission that they adhere to both in their gallery, on their website, through their printed catalog and at the many shows at which they exhibit at around the world. www.rauantiques.com