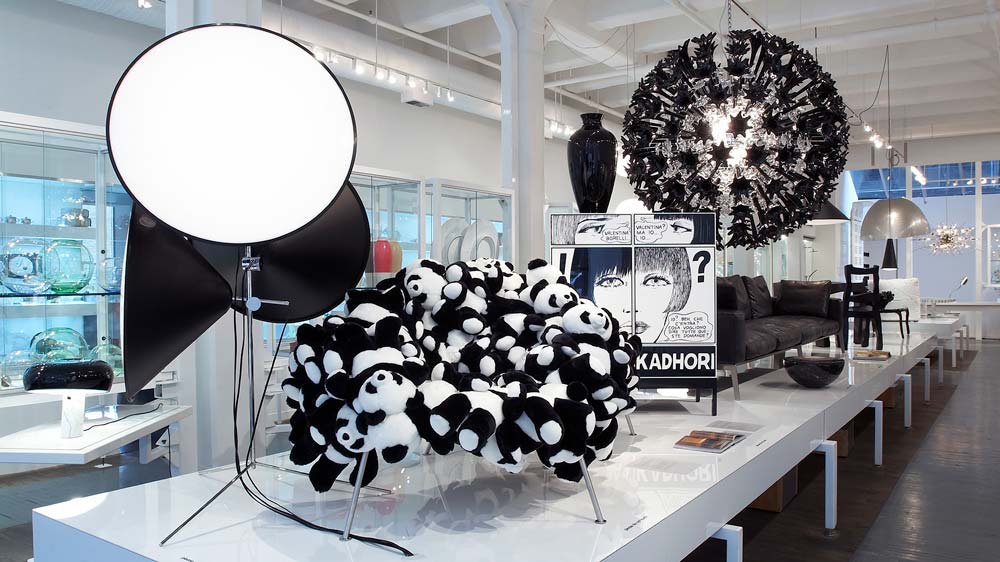 When Murray Moss opened his eponymous design store in SoHo in September 1994, it was unlike anything Manhattan—much less the world—had ever seen. Moss quickly proved to be a master in the curation of his cutting-edge mix of “home furnishings” as well as his clientele, who found themselves exposed, some for the first time, to the radical work of designers such as Gaetano Pesce, Hella Jongerius, Maarten Baas, Tord Boontje, and Studio Job. For those of us who had a chance to shop there, it was readily apparent just how brilliantly irreverent Moss was—the spotlessness of his store standing in sharp contrast to the grit of a city that had only begun its journey toward gentrification after newly minted mayor Rudy Giuliani declared New York to be “the capital of the world.”

Like all good things, however, Moss as a physical place was not to last, shuttering its doors after an 18-year run in 2012. In the years since, Moss—the man and the hyper-curated environment he created—have become the stuff of design legend, emblematic of those halcyon days before every brand had become its own brand ambassador. Robb Report recently caught up with Moss and Franklin Getchell, his partner and collaborator of nearly five decades, to talk about their recently released paean to Moss, a book titled please do not touch (and other things you could not do at the design store that changed design). They also discussed the suite of new projects carried out under the aegis of their Hamden, Connecticut–based Moss Bureau. And, in true Moss fashion, Murray managed to turn the tables on us, which we should have expected.

Your approach to design was so different . . . the way you marketed items and explained their histories and origins to visitors, who were rarely allowed to touch the items.

MM: Early on, I realized that there’s so much baggage attached to home furnishings—to what is appropriate and what isn’t, what the price should be, what it shouldn’t be. Criteria are applied in order to evaluate certain objects that aren’t necessarily the only criteria that one could use in making such judgements. For example, if you’re looking for a glass, the number of ounces it holds isn’t the key factor for everybody. We are constantly being presented with irrelevant information.

In writing your memoir, the two of you managed to collaborate without collaborating—much as you did at Moss. We gather you have been living in parallel universes for quite some time.

FG: We wrote the book the way we ran the store. Murray did his thing, and then I did mine, and then we had dinner. Murray was in charge of the creative—all of the things that actually made the store what it was. My role was to turn his dream into reality: to hire and fire people, deal with budgets, and handle the logistics. As I write in the book, “He could not have done it without me. Without him, I had nothing to do.” It was only at the very end of the process that we even learned what the other had been doing all of those years and how different our experiences had been.

MM: I’m sure Franklin had his own reasons for putting his thoughts down on paper. Mine were more to get it over with and move on, to commit something to paper as a sort of therapy. At some point, Franklin and I knew that we would probably do something with what we had written. Rizzoli had expressed an interest because we’d worked with them so much before.

What was interesting—I don’t know of another word but interesting as a placeholder—was that when we turned in our respective manuscripts to Rizzoli, we hadn’t read each other’s writing. We just submitted our work independently to our editor, who happens to be an old friend, and also to Rizzoli publisher Charles Miers. When Charles received it, his immediate reaction was, “Oh my god, this isn’t what I want. I want a history of the period.” We said basically that that’s not what we were interested in doing. From my perspective, the book was not intended to be the whole story. It wasn’t intended to be balanced. It wasn’t intended to be anything other than sort of stream of consciousness. Charles eventually came around and saw it entirely in new light and recategorized it from a design book to a memoir.

Among the items that could be found at Moss from left: a Forati Vase with Four Holes (1989) by Fulvio Bianconi for Venini, the Campana de Compane Papelino Bell (2005) by Fernando and Humberto Campana for Venini, and a Hermaphrodite Candle (2007) by Greece is for Lovers.  Courtesy Murray Moss and Franklin Getchell

Tell us a bit more about your most recent endeavor, Moss Bureau.

FG: We launched it right after we closed the store, and as it turned out, one of our very first projects was to redo the retail environment at Philip Johnson’s Glass House. We seem to be doing a lot of museums at the moment. Right now, we are working with two: the Jewish Museum in New York and the Museum of Fine Arts in Houston. That second one has been going on for quite a while. We meant it to be for six months, which is what we had told them. But we all got along very well, and they kept finding additional things for us to do. It’s going into its fourth year now.

MM: But we do other things at the Bureau. When you transition, one way to do it is to define what your offering will be. Another way to do it is to just wait to see who calls. People often think we can do things that we haven’t thought of. We recently got a call from a company that produces aquariums. We have worked with Starbucks, and we did a two-year project for an interior of a residence. It is interesting that people thought of us in these capacities. Over the past couple of years, I have also written several books for Rizzoli, histories of certain design companies.

You recently moved out to Connecticut after what seems like a lifetime in New York City.

MM: We moved out to Connecticut a year and a half ago into a house that was designed by an architect, a woman named Alice Washburn, in 1929, for a professor of physics at Yale who invented the homing torpedo. Just out of amusement, we called it Torpedo House just between ourselves, but then the name just stuck. We use the house as design space, and this fall we are launching the Torpedo House Lab, a design program with RISD [Rhode Island School of Design] that will take place at the house. The school is only two hours away. I’m working with Rosanne [Somerson], who’s the president of the school, to create a signature graduate course that highlights and emphasizes RISD’s interdisciplinary program. They have some 16 departments covering all areas of the fine arts, the applied arts, and the industrial arts. The Torpedo House Lab will be the first off-campus program the school has launched. It is being created to explode anachronistic out-of-date paradigms. And, of course, we use the house as a bit of a selling space—you can see the available items online.

Offerings at Moss are under lock and key in glass cases suspended from the ceiling.  Photo: Courtesy Murray Moss and Franklin Getchell

MM: Can I ask you a personal question?

MM: When you read this book, did it change your feelings about the store, your experience there? Was it a surprise to you, or was it a validation of it? Or was it just odd? I’m curious because I don’t know exactly what that book is, you know, or how it will affect people.

Until I read the book, I didn’t realize how much mind manipulation you were engaged in. I always knew the store was hyper-curated, but I didn’t realize how you tantalized customers—heightening their desire for objects by keeping them under lock and key or just beyond reach. I thought you were trying to keep things out of reach just because they were expensive. I was entertained by that because it wasn’t readily apparent if one was shopping there. So one of the things that came across in the book was, “Oh my god, everything was by design.”

MM: I’m glad that you feel that way. Thank you.