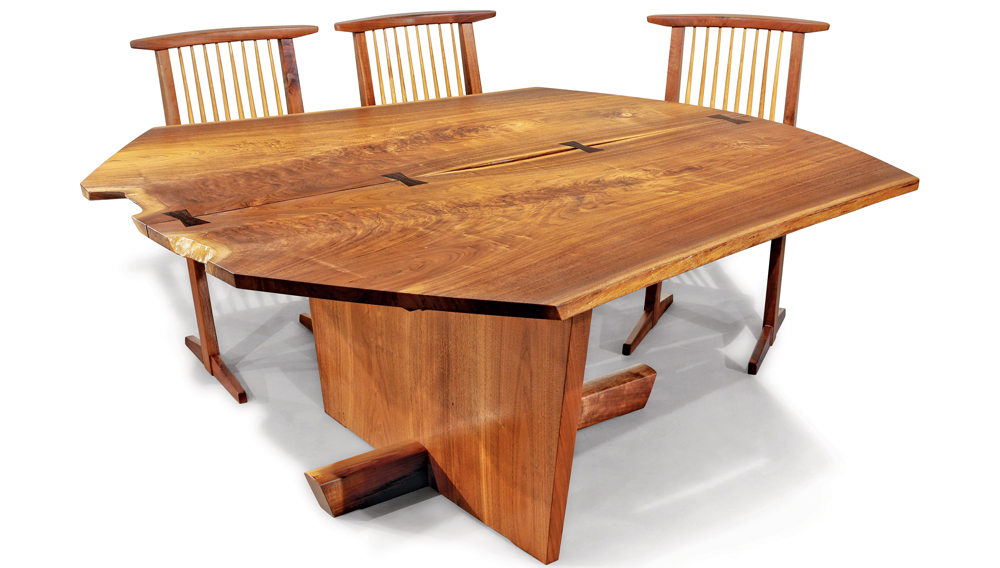 One of the founding fathers of the 20th century’s studio furniture movement, George Nakashima saw beauty where others could not. The designer, who passed away in 1990, regularly scoured the leftovers of lumberyards, plucking up seemingly useless scraps of wood to shape some of his generation’s most prized pieces. His work has been exhibited in major museums for decades and often fetches six figures at auction. “He accentuated the flaws [in the wood] rather than cutting around them,” says Robert Aibel, founder of the Moderne Gallery in Philadelphia, the leading specialist dealer in Nakashima’s furniture. “He thought the flaws in the piece could be used aesthetically to appeal to people’s sense of nature.”

For this year’s Ultimate Gift Guide, Aibel has assembled a one-of-a-kind collection of Nakashima dining-room furniture ($462,000). The collection’s crown jewel is a rare Sanso table fashioned from American black walnut—one of Nakashima’s favorite woods—which the furniture maker based on his designs for the Peace Altar at New York City’s Cathedral of St. John the Divine. Accompanying the Sanso table are six Conoid chairs that were created by private commission during the 1980s, and a double “radio door” buffet. The latter, a furnishing designed to hold linens and silverware, resembles the radio hi-fi cabinets for which Naka­shima was well known. The collection’s trestle server—another scarce piece—provides an extra surface for finishing dishes before serving.

Tying the room together is a custom chandelier designed by Nakashima’s daughter and creative heir, Mira Nakashima. Crafted from Japanese cypress and fiberglass-impregnated paper, the fixture will shed light on a rare assemblage by one of the United States’ furniture masters.