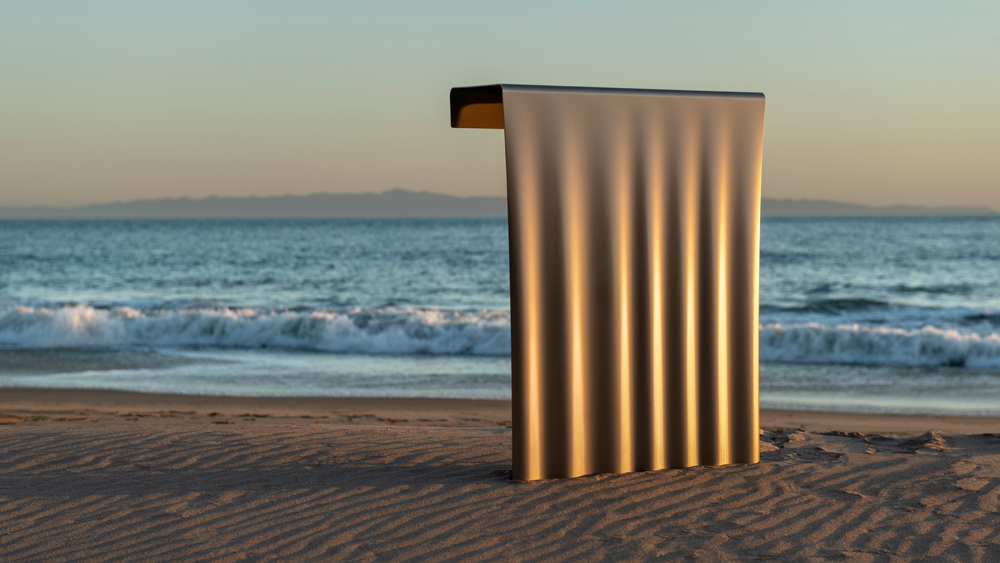 Since Black Friday, we’ve been bombarded with an endless blur of furniture and décor promos cutting across every screen and device we own. What you will not find in the mix is anything quite like the Cloth console. Designed by Alex Rasmussen of Neal Feay Studio and priced at $21,000 only 25 exist. So, if exclusive design is your thing (and shouldn’t it be?), you and 24 other design-minded souls can relish the singularity of a signed and dated work in rare supply. But decide quickly. Because they are only around until the end of the year.

Cloth is Neal Feay’s first limited-edition furniture release. The undulating form started out like most convention-defying ideas: as a custom piece. The Santa Barbara-based outfit specializes in anodized aluminum, a dutiful material that doesn’t usually get the decorative main stage, which in this case is kind of the point. Neal Feay has been around since 1945; they are sought-after for their expertise with aluminum, creating everything from major architectural elements (like work on a Louis Vuitton boutique) to minimalist towel bars and grab rails for yachts. Specific things that have purpose and look good. While that’s a simple concept, it’s an involved process.

As designer and brand president Alex Rasmussen tells us, this one was destined to hold on to its utility but also take it up a level. “The Cloth Console was specifically created for a foyer environment where it greeted people to the home. It was quite a traditional home, and the Cloth Console was to sit in a plaster alcove where one could place flowers in a vase or have art on display alongside it. “At the time, we added a very subtle lighting element to the design that almost makes it the world’s most expensive nightlight,” he says with a laugh.

Technically speaking, it came to life via all alchemy and alloys with engineering degree-adroitness that brings us back to design’s greatest and most spectacular principal: Simplicity is hard.  The team started with a block of tempered 6061-T6, a common grade of high-strength aluminum, that weighed close to 130 pounds. They then transformed it into a fluid, svelte 35-pound form. “Pure aluminum is actually quite soft, but alloying elements are added that allow the material to get much more structurally sound,” says Rasmussen. “The T6 is a measure of temper. That is the hardest condition, making the material much stronger.” With a 5-axis CNC machine and super fine CAD/CAM technology, the studio milled the Cloth console, which seems to float because it’s designed with hidden structures so that it doesn’t actually touch the floor.

The finished work appears to ripple like a cloth (hence the name), but in anodized aluminum, which plays with all the obvious expectations. Each of those folds required precision and, as Rasmussen describes it, “the console has to be restrained to an incredibly exacting degree during the machining operation. This forced our designers to develop a new technique for fixing the billet while it is being machined. Successfully applying such a prodigious amount of detail like this to a machined piece of metal has a lot to do with how well one is able to hold it in the machine.”

Inspiration for the design also deviated from predictable sources. Rasmussen admits he has always been intrigued by French design—and how it embodies (rather consciously) the pursuit of luxury. Instead of sharp, muscular aesthetics, the designer looked in another direction.  “French design isn’t afraid to be decorative. There also isn’t such a rigorous modernism to French design. I think that relates to our new Cloth Console design quite specifically. The Cloth Console isn’t a pure rectangle. It isn’t some hard, linear thing. The Cloth Console actually has some beautiful feminine qualities to its design. It’s a refined, fluid piece,” he says.

The studio also considered the finishes. Available in multiple custom colors—black is always a winner—Cloth is offered in various color degradations, like pink that fades into red, with the sheen altering everything just enough. “The reflectivity of the finish radically changes point to point wherever one is in the room seeing it,” says the designer. “The piece has a ton of personality. It’s not some boring static design someone sees from across the room, and experiences once. The design of the Cloth Console is meant to be in constant movement, back and forth much like a curtain.”