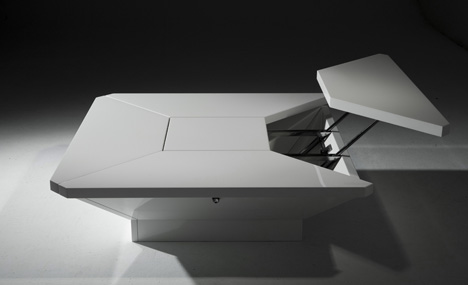 The Galerie Van den Akker furniture gallery in midtown Manhattan has unveiled a collection of recently rediscovered 1960s and 1970s light fixtures, tables, and bookshelves from Luigi Sormani Design, an Italian furniture company whose works have been acquired by leading design museums around the world, including New York’s Museum of Modern Art. A chance meeting between gallery owner Ray Raymakers and Luigi Sormani himself at a European auction in 2007 led to talks of a potential collaboration. Sormani returned to Italy after the auction, discovered a reserve of unassembled lighting and furniture?untouched for more than two decades?in a company storage space, and went to work restoring them. He brought in some of the same craftsmen who had created the earlier versions, now in their 70s and 80s, and updated electrical elements to current code and re-fabricated some hardware elements.

The Sormani Collection at Galerie Van den Akker consists of some of Sormani’s most well-known pieces, including Libreria Centro ($66,500), a large-scale revolving bookcase designed and produced in 1960. Only 50 rosewood bookcases have been reproduced, one of the originals of which was owned by designer Karl Lagerfeld. The collection also includes the Coclea Cocktail Table ($19,750), a lacquered wood table designed in 1970, which features an internal mechanism that allows the sectioned top to be raised or lowered, not unlike a tray being raised to the seated guest before the table. The Sormani Collection at Galerie Van den Akker comprises 11 pieces. (www.galerievandenakker.com)