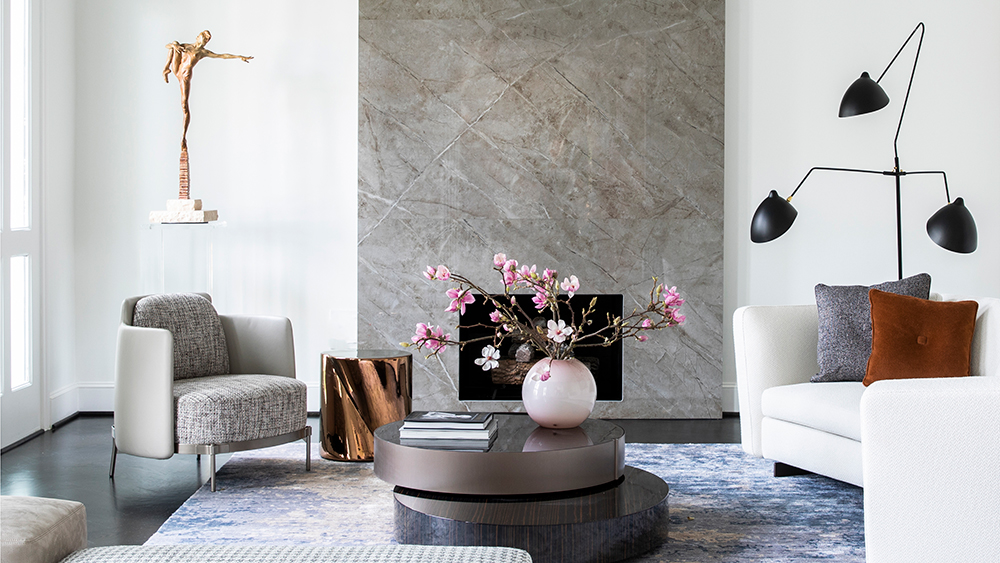 The parlor. The seating is all from Minotti, and the lamp is by Serge Mouille. The sculpture is by Richard Macdonald.

When interior designer Nina Magon bought a home in the Piney Point neighborhood of Houston, she thought that it might be haunted. “The energy was terrible,” she tells Robb Report. “When my team went in there to take measurements, they got scared. It was completely run down; there were spiderwebs everywhere.”

As the founder and creative director of Contour Interior Design, the home was hardly her first renovation, but it certainly came with its own set of challenges. Magon and her husband purchased the place because she saw its potential: The home had high ceilings, beautiful molding, wood paneling and columns. Rather than tear the whole thing down and start from scratch, she opted to work with these natural advantages, not against them. But while Magon’s skillset meant she could handily transform the 11,000-square-foot traditional manse into an enviable retreat, the bad vibe was more than a reno could fix.

For that, Magon turned to an art that was part of her Indian heritage, one that her parents faithfully adhered to in their home: Vastu Shastra, an Indian system of architecture similar to the Chinese practice of Feng Shui. Magon had implemented some Vastu practices in her previous home at the advice of her parents and a Vastu master: After a bout of money trouble, for instance, the master suggested moving her backdoor five feet to the right, because her money was “flying out the door.” After she did, her finances stabilized.

The main room. Magon kept the original columns and wood paneling, and added Minotti furnishings to create a more European modern feel. The painting is an original by Joan Miró.  Contour Interior Design

Redesigning a new home with Vastu, however, proved a more difficult task. When Magon brought her expert into her new home, he mapped the whole place out on an intricate grid of 16 different directions. “We had to move the entire family room to where the kitchen was and move the kitchen to where the family room was,” she says. “Then we had to move the pool, because there could be no water source there. It was a lot of architectural changes. If you really want to get into Vastu, then you can’t even put colors in certain areas. We didn’t go that far.”

The kitchen, which features Gaggenau appliances and Eggersmann cabinetry. The floor and countertop are made of Cosentino marble, the hanging lamp is from Gallotti&Radice and the chairs are Molteni&C.

In other words, Magon didn’t rely solely on Vastu to make her new home beautiful. She also drew upon her own sensibilities, honed over years of crafting forward-thinking interiors for her many clients. The first step was to let the light in. The home was originally cast in a cream-colored plaster, which Magon felt made the interior look dull and dark. She and her team painted almost every room a white color, and changed all the lights to brighter LED bulbs. The result is an airy retreat with plenty of natural light, so much so that, during the daytime, you hardly even need to turn the lights on.

Still, the house felt too traditional for Magon. Rather than completely change it, she chose to keep the wood paneling and the columns in the main family room, as well as the original molding. She worked with these features rather than against them, updating the house with furniture from Minotti, Riva, B&B Italia, Flexform and other Italian brands to create a European modern feel.

The master bedroom. The bed is from B&B Italia, and the seating area has a sofa by Meridiani and a coffee table by Molteni&C. The bench and end table are Gallotti&Radice.  Contour Interior Design

“Had we removed everything, the house would have no character to it,” she says. Of course, the house’s worst character trait—its negative energy—is ancient history, thanks to Magon’s work with Vastu Shastra. “I have no problem being in this house now. I don’t feel scared.”

See more of Magon’s manse, below:

The master bathroom, with marble from Porcelanosa and Cosetino.  Contour Interior Design

The dining room. A dynamic table by Karim Rashid for Riva is the centerpiece; the chairs are from B&B Italia. To the right is a sculpture by Alexander Krivosheiw.  Contour Interior Design

The study, which is painted a muted grey hue to create a cozier vibe. The armchairs and rug are both from Fendi, and the table is Meridiani.  Contour Interior Design