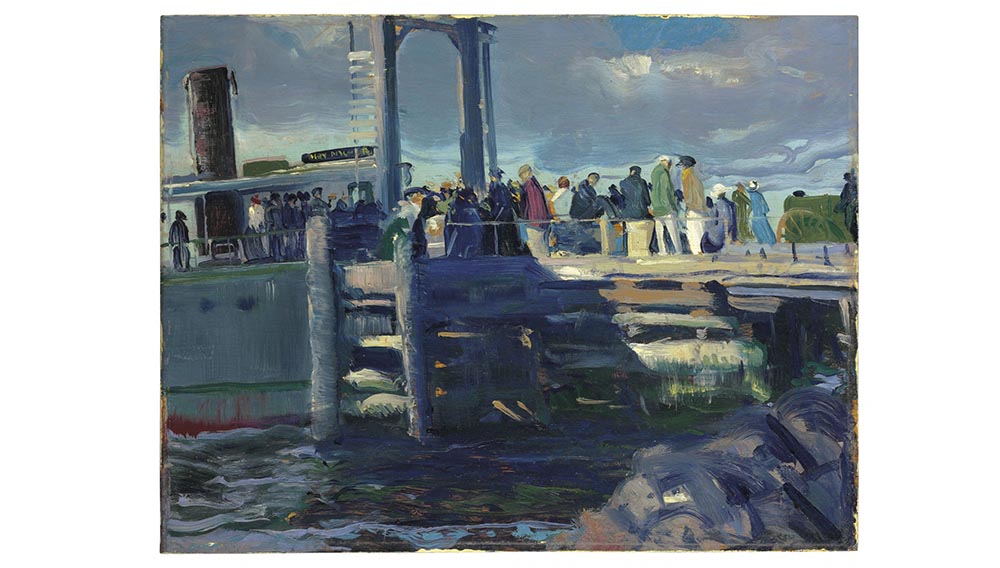 In addition, Christie’s Digital Sales will host America Illustrated: Norman Rockwell and his Contemporaries, which runs November 13 – 24, and offers a wonderful variety of 20th century American Illustration, from holiday-themed works to images of America’s favorite pastimes, with estimates ranging from $400 to $100,000.

Leading the November 19 auction is Norman Rockwell Visits a Country Editor, estimated at $10-15 million. This major, large-scale work belongs to an important series of works Norman Rockwell completed for The Saturday Evening Post at the height of his career in 1946. The painting is being sold by the National Press Club Journalism Institute, with the approval of the National Press Club, and the proceeds from the sale will benefit both nonprofit organizations.

Property from the Collection of Mr. and Mrs. Joseph H. Davenport, Jr.

Property from the Collection of Dr. Herbert Kayden and Dr. Gabrielle Reem

In addition to the 17 lots offered in American Art, the collection also includes works in the Post-War & Contemporary Art Day sale on November 11 and the Impressionist & Modern Art sales on November 12-13. American artists represented in this sale include Stuart Davis, Charles Sheeler, Arthur Dove, Max Weber, John Marin and O. Louis Guglielmi, among others.

An icon of the American Art community, Doris Bry was the leading authority on the works of Georgia O’Keeffe and Alfred Stieglitz and she wrote monographs on the two artists. Bry began working with O’Keeffe when she was 26 years old and she became integral to the sale of O’Keeffe’s artworks and the creation and organization of her record binders. Works on paper by O’Keeffe comprise a large portion of this collection of 27 works, many of which were gifted to Bry and appear on the market for the first time. In addition to O’Keeffe, artists in the collection include Alfred Stieglitz, Arthur Dove, and Joseph Stella. The sale of this group, with estimates for works on paper by O’Keeffe beginning at $8,000, presents an exceptional opportunity for admirers of the artist to begin a collection.

Thomas Moran was awestruck by the magnificent and rugged topography of the West and through his splendid paintings of Yellowstone, such as Jupiter Terrace, Yellowstone, was able to captivate the American public by transcending the limitations of written language to convey in his art the majesty and grandeur of the place.  Moran’s field studies proved to be invaluable not only to the painter, but also to the nation, as they were instrumental, along with the photographs of his fellow traveler William Henry Jackson, in Congress’ decision to make Yellowstone America’s first National Park on March 1, 1872.

Frederic Remington is the story teller of the American West at the turn of the century. Ghost Stories characteristically conveys the drama of the old West, and is representative of his mature abilities as a painter.

Click HERE to learn more about the digital sale, America Illustrated: Norman Rockwell and his Contemporaries.