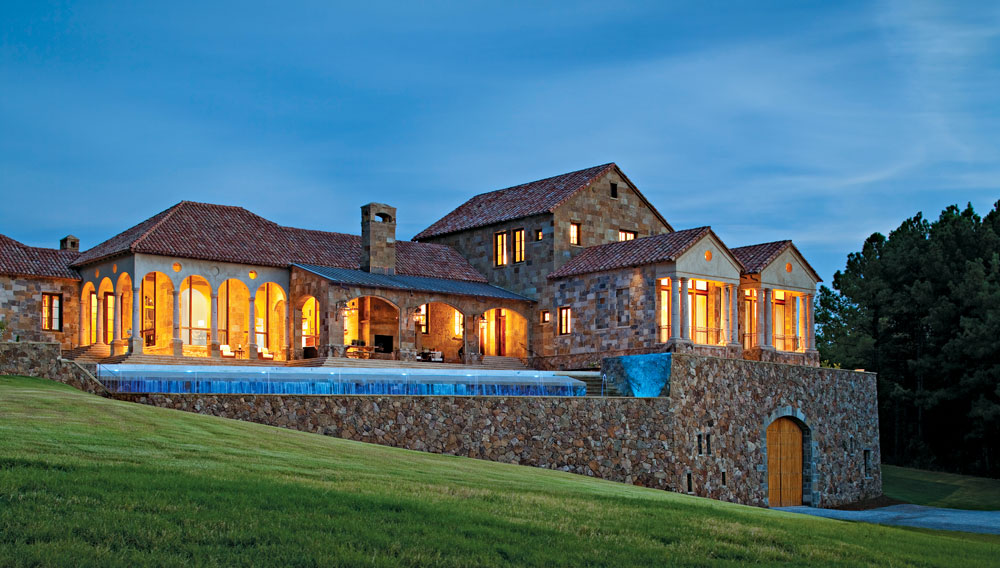 In Jackson, Miss., where plantation-style homes with porch swings are the norm, a 27,000-square-foot Tuscan-inspired estate might seem out of place. “Most of the homes in this private development are typical Southern plantations,” says Louisiana-based architect Kevin Harris. “However, this site is tucked away on 160 acres, with rolling green hills and treetop views. It feels like you’re in Italian wine country.”

The four-bedroom home, which was completed in July 2010, represents a five-year collaboration between Harris and the homeowner, a lawyer and real estate developer in his early 60s. With the help of Jackson-based interior designer Annelle Primos, the architect styled the home to match the slopes of the landscape—and adhere to historical accuracy. “The homeowner had found a statue of an elephant while shopping in Santa Fe that he wanted to put in the entry courtyard, but the interior designer was concerned that there were never any elephants in Italy, and it would compromise the integrity of the home,” recalls Harris.

After researching the subject, the homeowner discovered that Hannibal, a Carthaginian military commander, had brought 37 war elephants with him when he crossed the Rhône into Italy during the Second Punic War. “It may seem tedious to worry about the historical accuracy of an elephant sculpture,” says Harris, “but it was extremely important that we made the home as true to the authentic Italian style as possible.”

Out with It | About half of the home’s square footage comprises outdoor living areas, which are staggered along the natural slope to create several distinctive spaces with unobstructed vistas. From the home’s main entrance, through a courtyard, to the backyard and swimming-pool area, the elevation drops 23 feet. “You can host a large party and have people enjoying the views from the outdoor dining area without blocking the views for people in the living room, which is right next to it, but a few feet higher,” explains Harris.

The rustic exterior is a combination of three layers of Arkansas fieldstone, parts of which are covered in lichen, making the rock appear aged. Reclaimed handmade 17th-century clay tiles top the roof.

Inside and out, designer Primos followed the architecture’s lead for the furnishings, which are a mix of new and vintage pieces. The outdoor dining area includes antique French dining chairs arranged around a reclaimed-wood table. Old pots and jardinieres were collected over the years and complement new items such as rattan lounge pieces from Restoration Hardware.

Rugged Appeal | “Sometimes a home will just tell you what it wants,” says Primos. “The minute we laid down the rug in the living room, the whole room lit up, and it set the tone for the rest of the home.”

The neutral-toned rug from Rugs by Robinson in Atlanta features a hunting motif and gives the room a soft, rich feel. Overstuffed Rose Tarlow chairs in butter-soft leather and Nancy Corzine velvet sofas layer textures. The modern-shaped bolster pillows from B. Viz Design in Louisiana are made from antique textiles. French tables and Italian chandeliers purchased on European buying trips continue the subtlety of the larger upholstered pieces so as to focus attention on the grounds, which are framed like a landscape painting through the arched terraces.

The nearby library holds the homeowner’s collection of books, many of which are antique English leather-bound tomes. Woodworkers bleached the wood cabinets to give them an aged patina and then fronted them with chicken wire. “I particularly love the curtains’ appliqué finish, an 18th-century technique that was done by hand,” says Primos. “If you’re going to try and do something that looks old, then it really has to look old. We didn’t cut any corners here.”

Double Exposure | Harris organized the floor plan so that every space, with the exception of the guest bedrooms, has to be walked through and experienced every day. To make the home more intimate, he eschewed long hallways and linear rooms. “A lot of times you see large homes with rooms arranged like a string of pearls—one pouring into the next,” says Harris. “The plan here wasn’t to create some kind of maze, but to have each room naturally flow into the next along the slope of the hill so that it would feel organic.”

Centrally located, the family kitchen features Venetian plaster walls, reclaimed wood, and rustic stone countertops, backsplashes, and flooring. The La Cornue range and absence of overhead cabinets give the space a European feel, as do a zinc-topped dining table from France and Louis XV–style dining chairs. (A catering kitchen adjacent to the dining room has more modern cabinetry and extra storage.)

Looking Up | Overlooking the backyard, the master suite includes a bedroom, his-and-hers closets, and a bath with floor-to-ceiling glass windows. “Our biggest challenge with the home was making some of the larger spaces, like the bedroom, feel human in scale,” says Primos, who designed the room around a vintage fireplace purchased at an auction in Normandy. “All of the elements in the room can stand on their own, but at the same time, no one piece makes a huge statement, so it all feels cohesive and balanced.”

Furnishings in the bedroom include a Louis XV–style writing table, a Dennis & Leen coffee table, and seating from the Cameron Collection. A Rose Tarlow canopy bed draws the eye upward. “One of the things you really notice in the bedroom is the ceiling,” Harris says of the space’s hip roof with reclaimed beams. Elsewhere in the home, salvaged beams and barrel-vault and groin-vault ceilings give each room its own character, thus avoiding too much uniformity.

Just off the bedroom, the homeowner’s closet looks out to the minimally landscaped yard. Dark walnut-wood cabinets with LED lights give the space a showroom feel.

Bathing Beauty | Although antique in feel, the home is modern in its construction. Infrared radiant heat quickly warms the wood sauna, which looks to the outdoors beyond the marble tub. The tub and stone floors are also radiant heated, while the windows—which are coated to prevent drafts and trap heat inside—incorporate an electrical system that allows the panes themselves to be temperature controlled.

The wife’s closet features a pair of mirrored antique doors found in the South of France, a mirrored dressing table, sconces from Belgium, an antique sofa found at a Paris flea market, and Swarovski drawer pulls that lend a touch of shimmer. “The space is soft, feminine, and beautiful—just like her,” says Primos.

Harris notes that while the biggest concern of some homeowners is where to place the televisions, this client was most concerned with views. “I think this is the only sauna I’ve ever seen with its own window, but the homeowner never wanted to miss an opportunity to look outside,” says the architect. “Although the home itself is gorgeous and comfortable, in the end, it’s really just a frame for looking out.”