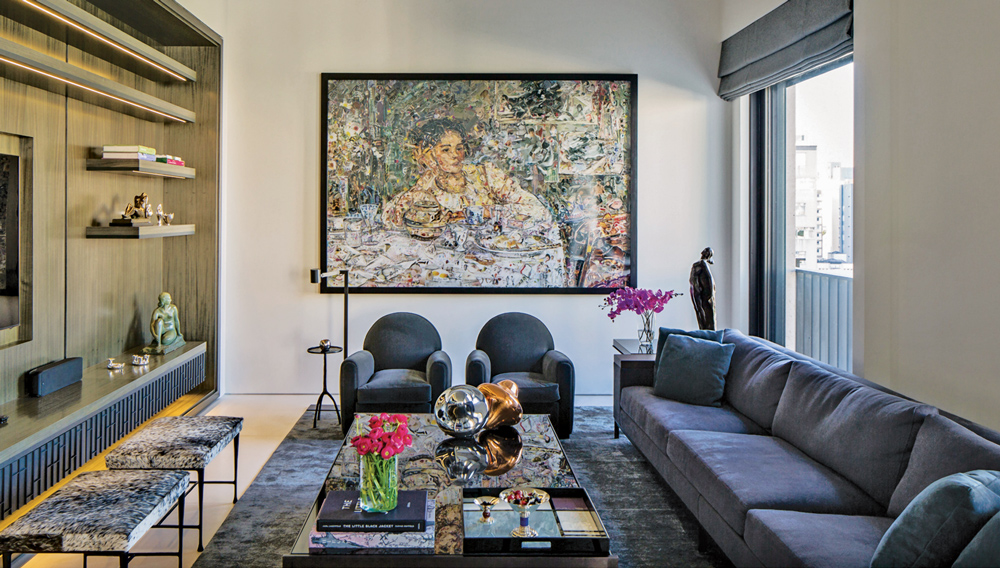 The husband-and-wife owners of this prime São Paulo address enjoy an expansive open-plan layout that celebrates light, views, and soothing repose amid a bustling environment. The couple live full-time in the Brazilian city but keep a second residence in Miami, where they first hired the New York–based, full-service design firm Grade. After that project, they contracted the firm again, enlisting principals Thomas Hickey and Edward Yedid to design this 6,500-square-foot home located in a newly developed building that looks onto a private park.

“The clients were looking for something that would feel very unique and chic, with a New York sensibility and a sense of world-class taste,” says Yedid. “They had the desire to make a loft-like space and really appreciated the raw concrete materials here,” adds Hickey.

In the open-plan living areas, a series of modulating grays sets a sophisticated tone. Because each unit in the high-rise building takes up an entire floor, the designers created striking glass entry doors off the elevator vestibule. “We used opaque [blue lacquer] and transparent glass so that visitors don’t get a full view of the house until the doors are opened,” says Yedid of the double doors that lead to the central living space. In the media area, a custom-made bar cabinet embellished with blue lacquer and oil-rubbed bronze floats on the wall, while a painting by the Brazilian artist Vik Muniz hangs nearby.

For reasons of security and humidity—São Paulo summers can be hot—the home’s terraces are enclosed in glass. Supai limestone floors connect the terraces with the living areas, as do the rich gray tones, which are punctuated with the occasional pop of color. In the glassed-in dining area, B&B Italia chairs surround a glass-topped table—created by the designers—with a base of stained oak and bronze. An antique light fixture with green glass spikes brings a bold flash to the mellow scene. The wife selected the piece from the antiques purveyor John Salibello. At the opposite end of the terrace, a quartet of Yin & Yang chairs by the industrial designer Kenneth Cobonpue forms a seating area. McCollin Bryan’s Coffee Bean table, purchased at Holly Hunt, completes the arrangement.

Feast for the Eyes

The custom kitchen, designed and handcrafted by the Italian maker Valcucine, features sleek stainless-steel countertops and closes off from the living areas by means of a blue lacquer door. In the formal dining area, a number of highly sculptural elements come together to create a statement-making space. The wife selected a hand-painted plaster artwork sourced locally to complement her collection of Demetre Chiparus terra-cotta figurines. “The [painting] is very horizontal, which plays nicely off the vertical lines found elsewhere,” says Hickey. Italian chandeliers from the 1960s hang above a custom-designed Fior di Bosco stone-topped table. The chairs bear a stain-proof gray-blue Holly Hunt fabric that brings color to the space.

“Unlike the first project we did for the client—a beach house in Miami where we used a much lighter, pastel palette—here, given the location in downtown São Paulo, we wanted [the home] to feel rich in a more metropolitan way,” says Hickey. That ambience permeates the residence’s bedrooms, which number just two (aside from the maid’s quarters) despite the property’s ample square footage. The master suite houses a bedroom, his and her bathrooms, a study/library, and an additional sleeping room. “The husband travels a lot and often returns home late, so we created a second sleeping space within the master suite,” says Hickey. In the master’s main bedroom, the designers created a space cosseted by soft fabrics, such as chenille and suede, to contrast with the concrete elements found throughout the home. “The wife really wanted the concrete ceilings, so a lot of our work involved creating something that could incorporate that while still feeling soothing,” says Yedid. Robert Kuo lamps flank the custom-made green-gray leather bed, which echoes the vertical lines found in the main living areas. “We were inspired,” Yedid adds, “by a Ralph Lauren bed that he designed recently.” A niche with suede-covered panels and custom cushions upholstered in Holly Hunt Featherstone fabric is both dramatic and sink-in comfortable. The nook’s lighting—designer David Weeks’s two-armed sconce—was purchased through Ralph Pucci.

The homeowners’ previous primary residence, located just blocks away in downtown São Paulo, was a more traditional environment filled with period pieces. To honor the couple’s history together while creating a more contemporary space, the designers encouraged the pair to give up their furnishings and keep much of their art and accessories. “They had a lifetime collection of many things,” says Yedid. “It was an eclectic collection, and we helped them curate it in a way where they can pause and remember in their new home.”

The husband’s office showcases many pieces of art from the couple’s collection, as well as Christian Liaigre’s Longitude desk, which features an oil-rubbed bronze base and a leather top. In the study/library located within the master suite, a Liaigre leather-wrapped ottoman keeps company with that designer’s Augustin sofa. The media wall—custom-built from gray-stained oak and oil-rubbed bronze—perpetuates the home’s one-of-a-kind look and feel. “This isn’t at all a typical São Paulo home,” says Hickey. “But the wife wanted something different from what everyone else did. She’s adventurous, and now she loves the result.”