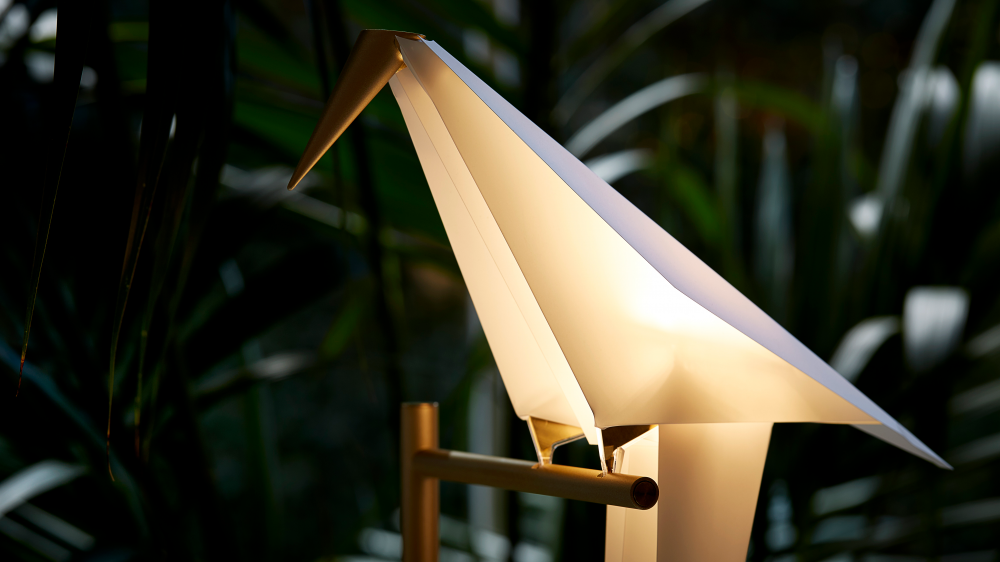 Origami’s early adopters didn’t have furniture on their minds—they were likely more concerned with crafting 1,000 paper cranes to curry favor with the gods. Yet the Japanese art has left quite the paper trail. Want in on its current resurgence? If transforming stationery into sculpture doesn’t fit your daily routine, consider plopping down on a piece of furniture ripped straight from the pages of an origami how-to. With sharp edges and points mimicking folded paper, these chairs, tables and light fixtures add a welcome structural edge to the many curvaceous lines found in modern furniture. Bonus: no paper cuts.

Originally designed in 1949, Cassina revived Frank Lloyd Wright’s Taliesin chair just last fall. And for good reason—its complex geometry and eye-pleasing angles have long made it a pleasure to sit in. Not to mention its construction, which is origami in the literal sense—each is made from a single piece of plywood, and “folded” á la the Japanese techniques of old.

Roric Tobin’s chair, meanwhile, was inspired by a chance encounter at a New York City boutique. “I was walking my dog, and I saw this store that had a bunch of [cranes] hanging. I was struck by how they they sort of looked like a chair,” the designer tells Robb Report. “I came back to the office, and my team and I got some origami paper and started making the crane.” In light of the original’s success, the studio has issued an outdoor version made of teak.

When it comes to design, most trolleys and bar carts are fairly rudimentary beasts. Lebanese designer Nada Debs, however, thought to put a modern spin on the old favorite by incorporating the boxy angles and points of folded paper. The result is a steel-and-walnut fixture with a customizable color palette.

Dutch furniture and interior company Moooi takes sculptural lighting to the next level with its Perch Collection, which is modeled after paper birds. Table lamps and chandeliers come with one, two or a troupe of these not-so-feathered friends—but we’re partial to this five-bird branch.

Late architect Zaha Hadid wasn’t known for her curvaceous structures alone—a few of her designs and that of her studio’s come to a point, the Mew low table among them. The piece’s converging surfaces and curves are a more fluid origami than the above, perhaps, and represent a Hadidian take on the beloved Japanese craft.