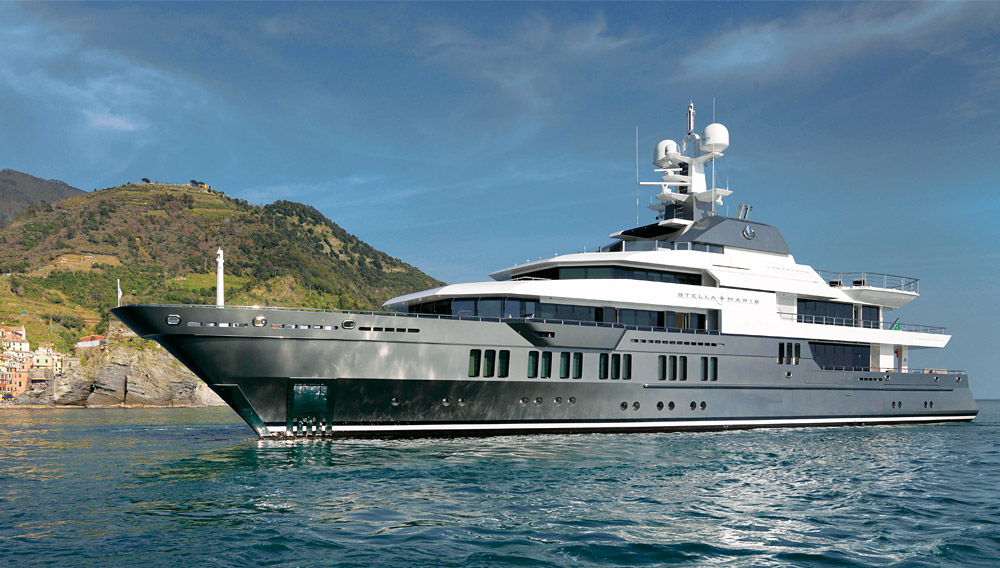 Oversize windows and a garden, among other features, make outdoor living the focus throughout Stella Maris.

Blurred Lines The interior design of Stella Maris delightfully blurs the boundaries between indoors and out. “We wanted to use all the colors of the sea,” says Michela Reverberi, whose eponymous design studio is based in Rome. Referencing seascapes, she used seaweed greens, sandy beiges, and wave-cap whites in the main saloon (above). Some of the greens are slabs of Brazilian marble hung on the walls—a surprising choice considering that weight matters when furnishing a yacht. The couch that dominates the space is an Alfa sofa by Zanotta. The teardrop-like armchairs (lower right) are by La Cividina, and the amorphous shapes on the floor nearby are floor lamps by Bosa. Other pieces, such as a low cabinet (middle right), are Reverberi’s designs. The main saloon also admits the outdoors more literally in the form of a verdant, visually pleasing garden, which is visible in three of the photos on these pages. The conservatory is fitted with an irrigation system and with glass that filters and controls the amount of sunlight the orchids and tropical plants receive.

Color and Light Blues appear as accents in the yacht’s private spaces, from the upholstery on the seating in the Reverberi-designed owner’s wardrobe (near right) to the bedding in the master suite (middle) and the children’s cabin (far right). The color adds a touch of home, and while it seems self-evident that yachts are different from houses, Reverberi, who has designed interiors for more than 30 vessels, says she approaches these projects in the same way. “When I receive plans for a house or a boat, I follow my instincts,” she says. “When I am impressed by something, I give power to that particular thing.” In the upper saloon (below), she gave power to the oversize windows that flood the space with sunlight. “There are no lights in the center of the room. All the lights come from the side,” she says, noting that at night, illumination comes from light-emitting diodes that span the mullions and the beams.

Level Best Reverberi chose not to hang chandeliers in the saloons, but she could have—the headroom in the public spaces exceeds eight and a half feet, which is unusually generous for a yacht. Exterior designer Espen Øino achieved this feat by relying on split-level decks united by a spiral staircase and a central elevator that can open its doors on the fore or the aft side of the elevator shaft as needed. “It’s all geometry, nothing about math,” he says. “The trick was to do it so that from the outside, the yacht wouldn’t look particularly tall or unusual.”

Both he and Reverberi emphasized the angularity of Stella Maris. Even slight curves on furnishings, as seen on the woven-rope chair in the beach club (bottom)—so named because it lowers from the back of the ship (top) to create a “beach” at water level wherever the vessel anchors—are remarkable for their rarity, and the flower mosaic in the wellness area (middle) seems almost rebellious. “I felt the necessity to add something more soft and fluid,” she says of the mosaic, which was fashioned by the Italian art mosaic company Sicis. “It’s unexpected, to interrupt all the masculinity.”

Outside In Stella Maris’s certified helideck—which according to VSY is one of only four megayachts in the world that can travel full-time with a helicopter in tow—serves as a sundeck (shown with Paolo Lenti furniture) when it is not needed for aircraft. Yet Øino notes with delight that visitors seem to prefer the yacht’s saloons to its sun-drenched decks. “On most yachts, the main saloon is not necessarily used a lot, but on this boat, somehow it is the opposite,” he says. “Normally on yachts, people want to stay outdoors, but not on this one.”

Perhaps this phenomenon owes to how successfully the yacht’s design brings the outdoors inside. The main challenge, says Reverberi, who joined the project in August 2008 (the interiors were finished last summer), was “to make something really simple but that did not look really cheap,” explaining that trends then favored more ornate interiors. The extra headroom, larger spaces, and big windows helped the effort. “The proportions were those of a house,” she says. “[Others] have said it looks more like a penthouse in New York than a boat.”