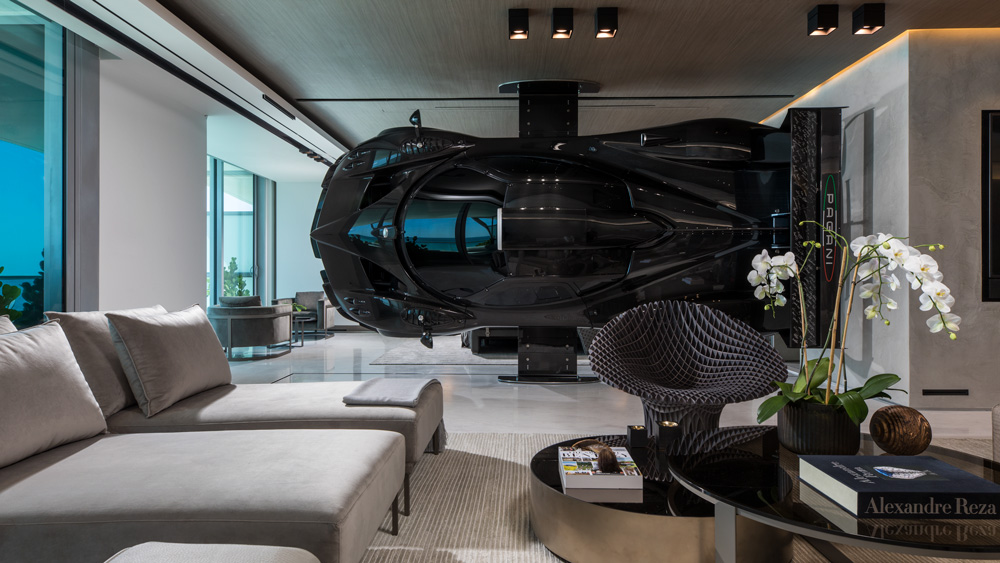 Miami living is not understated. The city’s dynamic skyline and real estate largess are practically rule of law, but there is always room for next-level feats . . . like the installation of an 800-pound, $1.5 million black Pagani Zonda R racecar inside one’s private residence. That might be classified as a design first, at least for this humble Home + Design editor.

Despite the obvious fanfare, this narrative begins with a devoted car lover and owner of an $8 million oceanfront condo who simply wanted an original design feature for his home. While the 4,232-square-foot open concept space was perfectly suited for entertaining and enjoying uninterrupted views of the Atlantic Ocean, like most modern floor plans, it left no distinction between private and public areas.

The client wasn’t content with typical solutions, so he sought Artefacto, Miami’s go-to design haven to execute a plan which had no architectural (or interior design) precedent. Placing a sleek Pagani Zonda R supercar within the interior effectively turned the custom-made racecar into a high-octane room divider. The move also reaffirmed what serious car collections have always believed—that some autos truly are art. More than anything, this striking proposal ensured the home’s one-of-its kind status (and effectively dropped some jaws).

“The Pagani Zonda is, without question, the design focus and inspiration of this residence,” says says Artefacto founder Paulo Bacchi. “It is a work of art and excellence. The entire floorplan and living experience revolves around it.”

The question, though, was how to actually install it. “We first had to consider all the logistics and permits involved, as well as determine if it was physically possible to suspend the Pagani vertically. We hired an incredible contractor, Finish My Condo, to execute with their expertise,” says Bacchi.

The racer was not part of the client’s existing collection. Rather, it was made exclusively for the client by Horacio Pagani, the mastermind behind the Italian brand. Only 15 examples were manufactured, which created even higher design stakes. The advantage, however, was that both teams could collaborate with Pagani on the concept. With the engine removed from the Zonda R, the group focused on engineering specifics. “Long hours of coordination between our local engineers, Italian engineers from Pagani, and experts in the building department were needed in order to accomplish the complexity of this project, since there is no precedent in the United States for this scope of work,” says Carina Radonich, co-principal of Finish My Condo (FMC).

They devised an aluminum and carbon fiber stand, which would be bolted vertically to the ceiling and floor of the unit—a solution that required significant engineering expertise. A series of x-rays guaranteed that the placement was accurate (and to satisfy various city, county, and building codes and requirements), explains Radonich. “The major challenge was to create a piece that would support the weight of the car and comply with the structural calculations,” she says.

And aesthetics were not tossed aside. The team was challenged to create a stand that “would not interfere with the beauty of the piece,” according to Pagani Italian design. This unique support also needed to conform to the strictest safety norms, as regulated by United States codes,” she said.

Next came the dizzyingly task of managing paperwork—producing structural calculations and architectural plans, submitting plans and paperwork to the appropriate building departments (on both county and municipal levels), in order to get approval for task that had never been done before in country, recalled Radonich, recounting the steps required (and the substantial patience involved, no doubt).

That process was rivaled only by the physical effort of actually moving the car into the unit. It took 25 people, with Pagani, Artefacto Home Staging, and FMC Construction all on-site. After all the safety precautions were in place, the Zonda R was carefully wrapped in protective material so no damage would occur during transport. The racer was then lifted about 90 feet off the ground, moving at the slow, cautious and well-insured pace of a thoroughbred until it reached the condo unit’s balcony.

Admitting to one emotional swell, Radonich reveals, “there was a period of awe-inspiring silence, when car was lifted up. However, we are used to working with exclusive and valuable art pieces, and this is what makes us trustworthy in the market.” Herculean strength was required to move Zonda R, as the team had to coordinate a precise balance of brawn for the pulleys with deliberation, so as not to damage the carbon fiber exterior. Once inside of the unit, a team was with equipment was waiting to and begin the installation process.  It took three full days to finish the project.

As for the design impact, what does a rare Italian race car do for one’s interior? “It creates dominance and speaks to the owner’s passion for excellence, motion and fluidity,” says Bacchi. “The energy is anchored by something so rare to see installed as art, and then we selected Artefacto furnishings that integrate this same spirit and velocity.” Though it’s safe to assume that even with most sophisticated furniture and décor, most guests are probably captivated by the supercar suspended in the room.