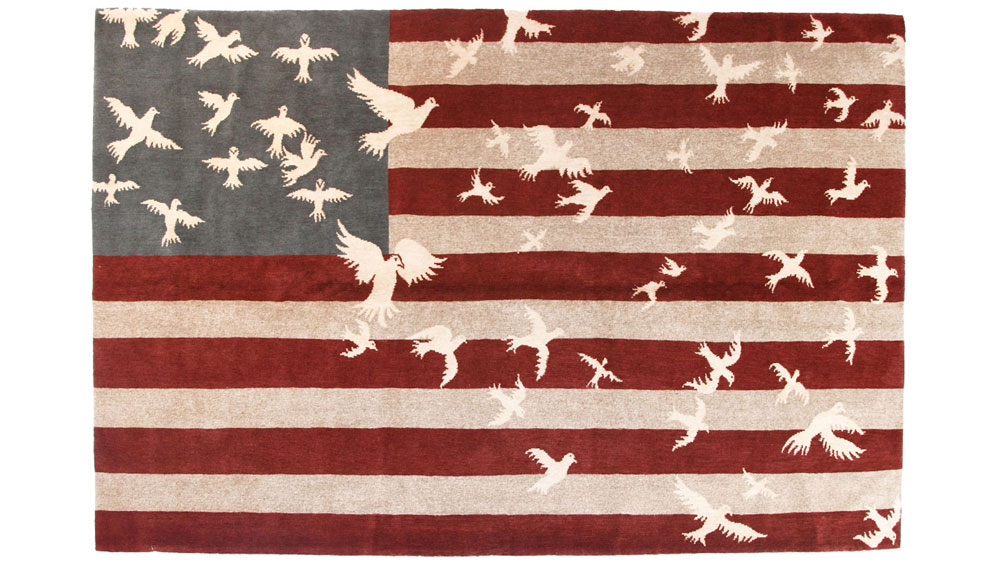 Given the politically charged rhetoric as of late, society’s collective charm has slipped into the same abyss as the comments section following most news articles. But design doesn’t play those games. Design is our best defense against incivility, mostly because it encourages only silent judging.

So often art does imitate life, and fighting words helped conjure up the Doves & Stripes rug – an elegant outsider take on the American flag by British designer Luke Irwin. The founder and designer of his eponymous line of sophisticated hand-crafted rugs wasn’t on a quest to reimagine this particular emblem. “Strangely there was no particular desire to do an iconoclastic take on the Stars & Stripes,” he relays. “This design came to me perfectly formed in a dream in 2008 when Hillary [Clinton] and [Barak] Obama were slugging it out in the primaries and George W. Bush was President. I fell asleep thinking about the Stars and Stripes, and as I slipped into a deep slumber the stars turned into doves and flew across the stripes. There is profound symbolism depending on your interpretation.”

From dream stage to production, it took a year to realize the project. The wool and silk rug creation was handcrafted both in Jaipur, India and the foothills of the Himalayas overlooking the Kathmandu Valley in Nepal. There, the piece was made using a hand-knotted technique which, says Irwin, “lends itself very well to contemporary and figurative weaving.”

The entire Luke Irwin collection is a handmade endeavor, with each carpet made to order. Doves & Stripes is a part of the Ockham’s Razor series, fashioned from Irwin’s own exploration of ideas and motifs. Most of the inspiration behind his pieces are rooted in history—from antique textiles to crop circles and unearthed mosaic tiling—and nature, but for this particular rendition, going literal was not the point. Especially with the palette, which is not vibrant red, white, and blue. Instead Irwin favored more muted tones.

“When it came to interpreting the dream, I wanted it to be symbolic rather than exact,” says Irwin about the color. “I deliberately kept the doves very naive in design so it was more Native American or early Settler in feel and I wanted the colors subdued to reflect the symbolism of the design. Are the doves flying because the States are fleeing the Union or are they flying as the US exports peace and goodness?”

Perhaps similar thoughts crossed President Obama’s mind, as he was gifted a Doves & Stripes rug from Jack & Jill, a national Irish children’s foundation during the early part of his presidency.

What makes the design compelling might well be its lack of political motivation. “I should point out that the dream I had had zero political undertones – it is always better if you make no political statement on any piece and let those looking at it reach their own interpretation,” says Irwin.

But art is never too far removed from the body politic. And just as national debates rage about everything, art responds. Asked if he was nervous interpreting such a sacred and important motif, Irwin does not demure. “No. The great privilege of being an artist is that you can challenge received wisdoms and pomposity of State not just for the sake of being deliberately provocative but in the hope that people will view things from more oblique angles. I am not a US citizen and therefore I feel that I cannot be disrespectful to the US flag like a US citizen could, but because of the scale of the US and the influence it has on the world I have an opinion about it.”

As a decorative work, the rug can be seen as simply as an elevated handmade creation, the kind of aesthetic expression we seek in our daily lives. Opinions about design have swirling around since humankind first pursued embellishment, and they are unlikely to stop now.