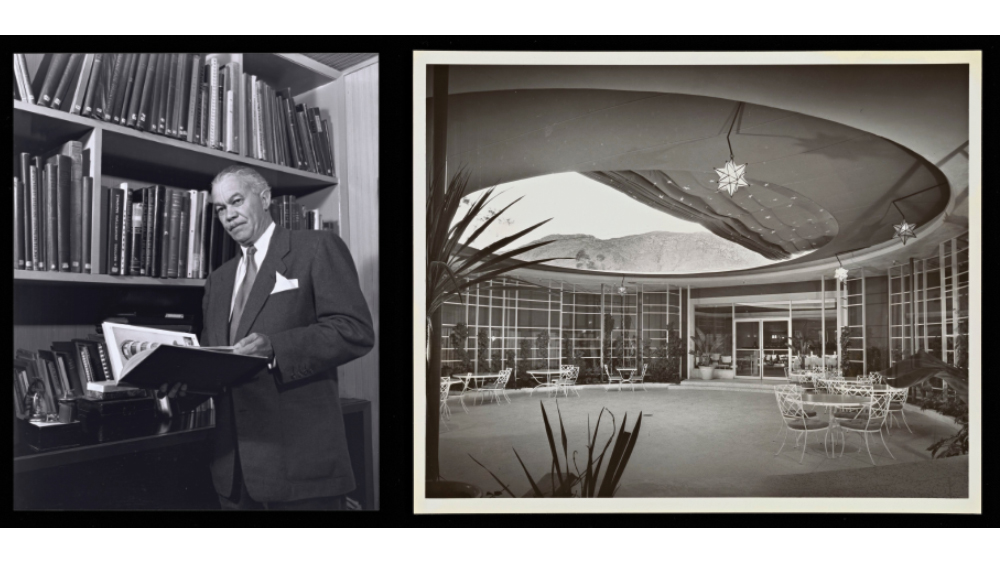 To commemorate Black History Month, Robb Report is publishing a five-part series highlighting Black designers, thinkers and other creators whose pioneering work has shaped the luxury sector. This is installment one.

It’s a story that’s been told many times: How Paul Revere Williams, the most renowned Black architect of the 20th century, the acclaimed “architect to the stars,” taught himself to draw upside down.

The reason was simple: He did it for the benefit of white clients who might have felt uneasy sitting beside a Black man while he sketched designs for their future homes.

In the same vein, the quiet-spoken Williams would typically stand with hands firmly clasped behind his back as he toured construction sites. Again, he simply wanted to avoid making clients feel uncomfortable, removing the need to shake the hand of a Black man.

Despite the inequality and racism, both subtle and overt, the trailblazing architect, during a storied five-decade-long career from the early 1920s to his retirement in 1973, shaped the architectural look of Southern California, from residential projects to commercial and municipal ones.

He earned that “architect to the stars” tagline after designing homes during the Golden Age of Hollywood for a raft of A-list celebrities. From Tyrone Power to Carey Grant, from Lucille Ball and Desi Arnaz to Frank Sinatra and silent movie legend Lon Chaney.

Then there were the commercial buildings that came off his drawing board: Saks Fifth Avenue’s flagship Beverly Hills store, the Los Angeles County Courthouse, the MCA headquarters, the Golden State Mutual Life Insurance Company headquarters and the landmark additions to LA’s Beverly Hills Hotel.

When the architect passed away in 1980 at the age of 85, he left behind a prolific portfolio of more than 3,000 buildings that included homes, hotels, banks, churches, hospitals and schools, many of which have become Southern California icons.

In June last year the Institute, together with the University of Southern California, was able to acquire Williams’ entire archive of roughly 35,000 plans and 10,000 original drawings that had been meticulously curated by his granddaughter, Karen Elyse Hudson.

“The work contained in the archive tells many stories. It contains the creative expressions of an architect working across many different constituencies in a socially complicated time,” says Milton S.F. Curry, dean of the USC School of Architecture.

Paul Williams was born in Los Angeles in 1894, to parents who had moved to the city from Memphis. He was just two when his father died of tuberculosis, and four when his mother passed of the same disease.

Raised by church friends of his parents, he developed a passion for architecture and eventually earned a place at LA’s Polytechnic High School. It was here a teacher famously advised him against pursuing his dream, telling him white clients wouldn’t want to use a Black architect, and Black clients could never afford his services.

Yet Williams was undeterred. After becoming the first Black graduate from USC in 1919, he—almost unthinkable at the time—was appointed to the Los Angeles Planning Commission in 1920. The following year, he got his California architect’s license, opened his own practice in 1922, and became the first Black member of the American Institute of Architects (AIA) in 1923. He was just 29.

His big break came during California’s 1920s housing boom with the new greenfield suburb of Flintridge, north of Los Angeles. The developer, former senator Frank Flint, hired the young Williams to design his new home in the suburb. That led to other commissions in the area. Business suddenly started to take off.

The unfortunate irony is that the strict, race-based segregation covenants that Flintridge adopted would have prevented Williams and his family from ever buying property there. Same with the hotels he designed, where he would not have been allowed to stay.

But the architect continued to attract new commissions through his talent for inspiring clients with his remarkable creativity. He was also determined not to be pigeon-holed into one design style. He could offer plans that ranged from Tudor and French Provincial to Spanish Colonial or Modernist.

And his quiet demeanor, his always-immaculate attire—double-breasted suits even on gritty construction sites—proved to be key attributes in winning over clients.

In a 1937 essay for The American Magazine entitled “I Am a Negro,” he wrote that his aim was always to amaze potential clients within a few minutes of meeting—the upside-down sketching no doubt helped. This, he said, would let them focus on his skills and creativity, rather than his race.

It was without doubt his knack for connecting with Hollywood’s A-list that defined much of his legacy. One of his landmark designs was for a 15,000-square-foot, 20-room Bel-Air mansion in 1936 for Jay Paley, of the wealthy CBS broadcasting family. A highlight was its breathtaking “zodiac” pool, designed by Williams and featuring thousands of multi-colored tiles, hand-painted and imported from France.

The “zodiac pool” was also designed by the home’s architect, Paul Revere Williams.  Photo: Courtesy of Hilton and Hyland

The estate was eventually bought by the late hotel magnate Barron Hilton who called it home for more than 50 years. Following Hilton’s death in 2019, it just recently went on the market for $75 million.

Second only to Williams’ residential designs were his commercial projects, many of which resonated strongly with LA’s Black community.

An early work was the 28th Street YMCA just off Central Avenue in one of the city’s most historic Black neighborhoods. The four-story Spanish Revival-style building, completed in 1926, was LA’s first club founded by and for Black boys and men.

Williams’ Late Moderne design for the new Golden State Mutual Life Insurance headquarters, at the corner of Adams and Western in South Central LA, was considered a masterpiece when it opened in 1949. At the time, Golden State Mutual was the largest Black-owned insurance company west of the Mississippi. It sold life insurance policies to Black Angelenos at a time when other companies refused.

While his worldwide recognition was a long time coming, Williams and his nearly 60-year career and gifted body of work, finally received its due. In 2017, the AIA posthumously awarded him its prestigious gold medal, the organization’s highest honor. And his career was a recent subject of an acclaimed PBS documentary, Hollywood’s Architect: The Paul R. Williams Story, which can be streamed online.

As Williams wrote in that “I Am a Negro” essay: “Without having the wish to ‘show them,’ I developed a fierce desire to show myself. I wanted to vindicate every ability I had. I wanted to acquire new abilities. I wanted to prove that I, as an individual, deserved a place in the world.”