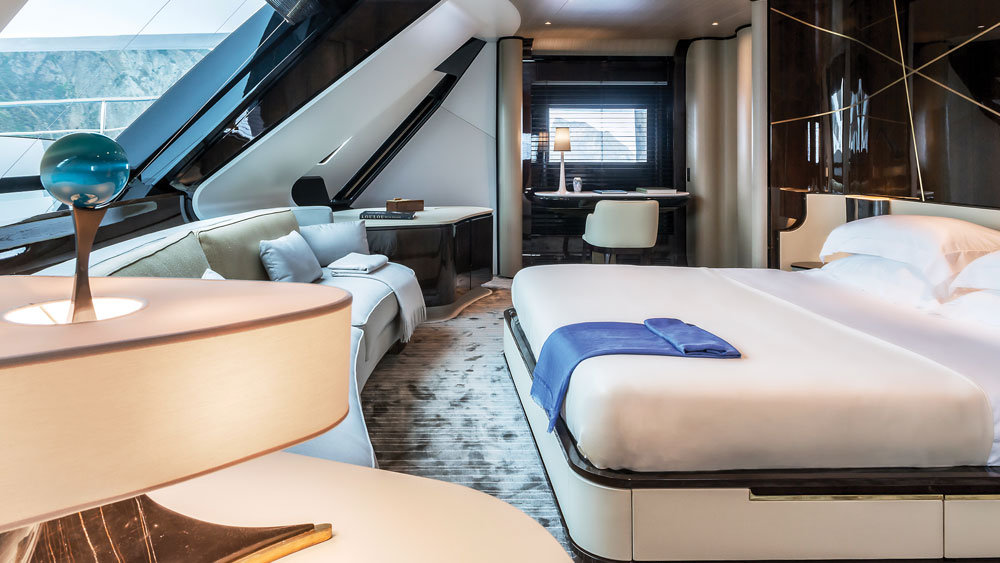 Residential architects have become the new darlings of the superyacht world. In some cases, they are replacing traditional yacht designers. In most, they are making the familiar, well-established marine design conventions seem like the fashion equivalent of a turtleneck—nice, but not exactly pushing it.

Owners are now asking for the style and ambience of home aboard their custom vessels, and they want it delivered with requisite individuality. As a result, they’re enlisting interior-​design studios and specialists who know how to achieve a look, not just source a few plush furnishings. Achille Salvagni—whose impressive portfolio includes Central Park pieds-à-terre, London townhouses, and a sought-​after collection of furniture and lighting—has ascended to a prestigious position within the superyacht scene. Known for high-level craftsmanship and bespoke, know-them-when-you-see-them details, Salvagni has become the go-to designer for clients who want a different kind
of yacht experience. Aurora, the recent 161-foot launch from Italian shipyard Rossinavi, could be one of his masterpieces.

Aurora is Salvagni’s third collaboration with Rossinavi, after the 230-foot Numptia and the 164-foot Endeavour II. Each vessel exemplifies his uncanny ability to combine refined decor with subtle colors and fluid spaces while still remaining distinctive. “I see myself as much as a psychologist as a designer,” Salvagni told me during a tour of Aurora at the Monaco Yacht Show. “I spend a lot of quality time with my clients so I can learn what their dreams are. Then I turn those dreams into designs they might never envision themselves.”

Designing a yacht requires an entirely different mind-set from a beach house in Malibu or palazzo in Venice. Not only is there the obsession over materials, since a boat needs to be as lightweight as possible, but there are also no permanent ties with surrounding terrain. “If you’re creating a design for Palm Beach or London, the heritage of the place will give roots to the project’s identity,” says Salvagni. With yachts, the view constantly changes. “So the design becomes more about the owner than a specific location,” he adds.

For Salvagni, Aurora conjures up the image of a rhino—particularly looking head-on. “You can almost see the muscles beneath her skin,” he adds. The 28-year-old Swiss owner of Aurora wanted a yacht with exceptional visual appeal, both inside and out, so veteran yacht designer Fulvio De Simoni created an exterior defined by sharp edges, huge deck spaces, and a low-slung superstructure. Special features include two saloons, a private terrace for the upper-deck master suite, and a spa with a steam room in the beach club.

The unconventional exterior meant extra headaches for Salvagni, especially the enormous forward windows that slope down in the master suite. “The yacht from the outside was amazing, but I also realized that we would never be able to hide the structural elements,” says Salvagni. “Somehow, we needed to absorb them into the design.” He did this by creating “white wings,” or broad leather-covered pillars that integrate well with the pitch of the windows. The wings and windows, sitting in front of the king-size bed, offer an exceptional view of the water without compromising the suite’s sense of harmony. “We were able to take a space that was closer to the design of a racecar and give it a residential environment,” says Salvagni.

After seeing dozens of custom superyachts at Monaco, I was struck by Salvagni’s creation. The entire space is a fluid, confident expression defined by the most audacious of all design moves—the curve. From the skylight to the sculptural staircase and voluptuous seating in the saloon, Aurora bends easily into this curvilinear language.

“Noble materials,” as the designer calls them, were essential to the project. A champion of artisan-​made pieces, Salvagni was thoughful with his material choices and created custom furnishings throughout. To give the interiors layers and dimension, he selected a variety of woods—brushed teak on the floors, limed sycamore on the walls—along with several types of Carrara marble that he handpicked from Italian quarries. The dining table has a gold-leaf top in an almost-forgotten technique developed by 1920s Parisian cabinetmakers that gives it a tactile, crocodile-skin feel. Salvagni paired this table with a futuristic globe chandelier he designed for the dining area. Aurora’s owner wanted the yacht to be a “fast speedboat” that reaches 28 knots, so De Simoni and Salvagni were cognizant of weight. The wavy marble wall in the master suite, for instance, is actually a Carrara veneer over carbon fiber.

The wine “cellar” is the vessel’s heart, positioned in the center at the junction of two corridors. “[The owner] wanted the wine collec-tion to be part of the yacht, so we designed an area where it can be seen without being too ostentatious,” says Sal-vagni. The effect of so many colored bottles is beautiful, like looking into a Fifth Avenue jewelry store. The climate-controlled cabinets display different light effects for specific wines, and a computer controls how much exposure the more light-​sensitive vintages receive. The owner can access the cellar by scanning his fingerprints.

Imbuing Aurora’s design with such refinement, Salvagni succeeded in elevating the vessel beyond “a static space that is simply decorated with furniture and wallpaper”—​exactly what the cool kids are after.