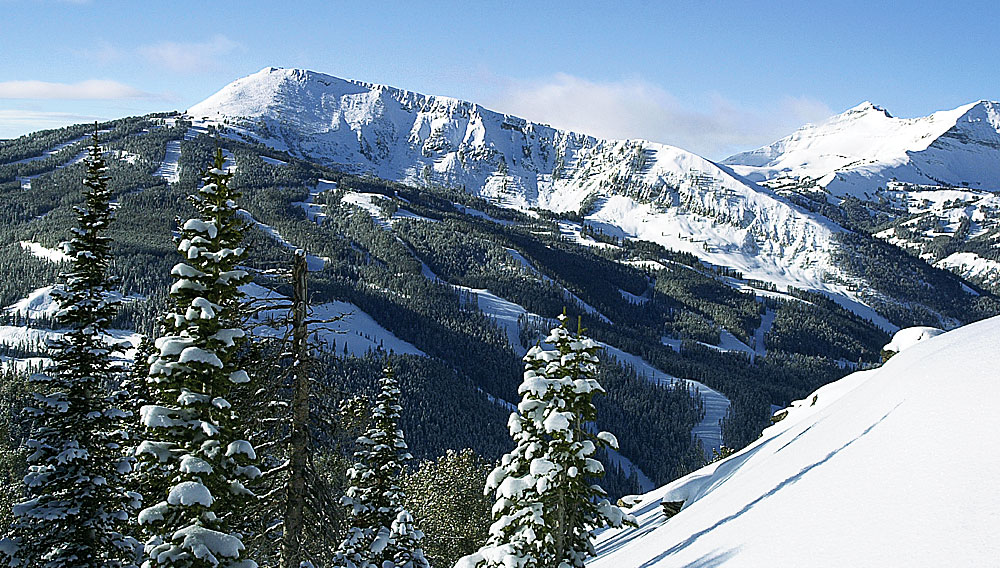 The value of a scientific experiment lies in the fact that, when repeated under the same set of conditions, it always yields the same result. However, more than a decade ago, timber entrepreneur Tim Blixseth conducted an experiment of his own that, even if another attempts it, is unlikely ever to produce a comparable—much less an identical—outcome.

In the 1990s, he and his wife Edra acquired various tracts of heavily logged land in the mountains above the town of Big Sky, Mont., about 50 miles south of Bozeman. These remote parcels were owned by various lumbering entities and, in some cases, managed by the U.S. Forest Service. Blixseth spent considerable sums of money and time purchasing and consolidating these sections of land—a process that required two acts of Congress to complete. When his mission was accomplished, Blixseth found himself in possession of some 13,600 acres of pristine alpine real estate, which he had originally intended to use as a private family ski retreat. But the interest that the project generated among his acquaintances and business associates steered his thinking in a different direction. He decided to transform this real estate into a private ski-resort community, in which he invited a few friends to become members and build homes.

The property, named Yellowstone Club, had similar attributes to other private communities. The 18-hole Tom Weiskopf–designed golf course set against the panorama of the Spanish Peaks range, the massive stone-and-timber lodge, the blue-ribbon fly-fishing, and the private fire department were on a par with the world’s top club communities. But it was the skiing that set Blixseth’s creation apart from any other place of its kind on the globe. A handful of developments in Vermont and Colorado possess their own small ski preserves—often just places for kids to learn—and Yellowstone Club’s neighbor, Spanish Peaks, has a lift and trail system connecting homeowners to the adjacent, and public, Big Sky resort. However, only Blixseth’s demesne had its own world-class ski area in the high peaks of the Rockies reserved entirely for its owners. Indeed, the slopes were so spectacular that legendary skier and filmmaker Warren Miller signed on as an honorary director of skiing.

Comprising nearly 14,000 acres and 46 miles of paved private roads, Yellowstone today provides members with 2,200 acres of skiable terrain and 15 lifts, making it bigger than the destination resorts at Deer Valley and Beaver Creek. This sweeping acreage includes extensive beginners’ areas, more than five dozen trails, a large section for open-bowl skiing, a true double black-diamond ridge of steep chutes, and 400 acres of incredible glade powder skiing. The club has added off-piste snowcat skiing for the 2009/2010 winter season, and the management is currently considering making roughly 2,000 additional acres available for skiing. Yet even on Yellowstone’s busiest day, only about 1,000 skiers take to the slopes—an average of nearly three acres of snow per individual. On most days, the number of skiers is far smaller.

This unfettered freedom explains why Blixseth’s brainchild captivates those visitors fortunate enough to pass through its gates. Even before the Warren Miller Lodge, which serves as the resort’s clubhouse, and many of the other amenities were completed, Blixseth’s sales staff reportedly converted an astounding 65 percent of the prospective members who skied there. Much of this early marketing success was viral: Members invited friends who, in turn, became members and invited friends of their own. One such guest-of-a-guest-turned-member was Sam Byrne, founder of Boston-based CrossHarbor Capital Partners and a former competitive skier who has skied all over the United States, as well as in South America, New Zealand, and Europe.

“My wife’s friend bought one of the first houses, and we were invited out for spring break,” says Byrne. “I thought it would be a place for kids to learn, with a couple of runs. I just didn’t think the skiing was going to be very good, but it was incredible. The headwalls are awesome. The chutes and Pioneer Bowl are like the tough stuff at Jackson Hole. It is just fantastic on a powder day, and the powder lasts all day. It really is private powder. It’s just joyful—that’s the word I use. After my second run, I was ready to buy a house.”

Yet in spite of its initial success, Blixseth’s club was soon beset with challenges, the greatest of which have been much publicized by the financial press. The entrepreneur excelled at wooing new members and developing the ski facilities, but construction delays on other projects, such as the condominium complex within the resort, frustrated members who had prepaid for their units. Blixseth’s attention was diverted by another concept he had dreamed up, the Yellowstone Club World, which would offer members the use of spectacular properties around the world, such as a historic château in France. To finance this undertaking, in 2005, at the peak of the real estate boom, he negotiated a $375 million loan from Credit Suisse using Yellowstone Club property as collateral. This action prompted shareholders in 2006 to bring a lawsuit against Blixseth, whose wife later filed for divorce. The primary asset in the divorce proceeding was the overleveraged club, which sought bankruptcy protection in 2008. Services suffered during this period, and the club, with such high-profile members as Bill Gates, became fodder for financial columnists.

In the midst of this crisis, however, Yellowstone Club leveraged yet another of its inimitable assets: its members. Club member Byrne soon organized the purchase of the club. His company, which specializes in distressed debt, provided Yellowstone Club with a debtor-in-possession loan. He then partnered with Discovery Land Company, a developer and operator of exclusive private-club communities, most notably Kuki’o in Hawaii; Baker’s Bay in the Bahamas; El Dorado in Los Cabos, Mexico; and the Madison Club near Palm Springs, Calif.

“I looked at two well-known luxury-hotel companies and other club management,” says Byrne of his decision to approach Discovery Land Company. “But at the end of the day, in this economy, Discovery is the last man standing, and the only one who operates multiple clubs with price points equal to or higher than Yellowstone.”

“There’s a big difference between being a visionary and being an operator,” says Mike Meldman, founder, chairman, and CEO of Discovery Land Company. “Tim was a visionary.” Meldman was so impressed with Yellowstone Club’s potential that he had tried repeatedly to buy the club before its financial troubles began. “I consider five private clubs to be the very best: Kuki’o, Madison, Baker’s Bay, El Dorado, and Yellowstone. And Yellowstone was the only one we didn’t have. In the last few years, as the economy turned, our projects have survived, and all our competitors have gone away. In all our clubs, we have partners, major financial institutions, and virtually no debt, which is why we survived the downturn. This is no different, except that Sam is also a member and is extremely passionate about it. He literally saved the place.”

Together with a group of members, CrossHarbor and Discovery bought the resort out of bankruptcy in July 2009 and agreed to provide more than $100 million in working capital. The partners then set about rebuilding member confidence in the club. Byrne spent $8 million in due diligence that included detailed engineering reports on all structures, an evaluation of the expansion potential of the ski terrain, and legal analysis of the club’s Byzantine membership contracts, which, remarkably, gave members none of the equity that is typical of similarly priced clubs. “I felt we had to do two things to make [the club] bulletproof,” says Byrne. “First, we redid the membership documents, so the members own the club at the end. That was vital. Then we over equitized. We wanted to prove that we could survive five years with zero income. We now have $200 million in equity.”

These efforts to reassure members succeeded. Not one member left during the bankruptcy proceedings, and when Byrne offered existing owners—many of whom had been biting their nails awaiting the outcome of the Blixseths’ litigation—an option to increase their exposure through additional investment, 70 of them participated. And although Byrne had prepared the resort for a zero-income worst-case scenario, buyers who had been sitting on the sidelines waiting for Yellowstone’s problems to be resolved began to snap up real estate, spending $55 million in the first four months after the club’s sale—about $1 million per day.

Meanwhile, Meldman and Discovery partner Steve Adelson quickly resurrected the club’s services, bringing in new staff and stocking up on supplies. While the infrastructure at Yellowstone has always been the best money can buy—from the fully automated Italian snowmaking system to the gleaming fire trucks—service had fallen below Discovery’s standards, and the company focused on immediate improvements. Among Discovery’s signature amenities are the comfort stations strategically located throughout the golf courses on its other properties. The team has introduced this service not only to Yellowstone’s Tom Weiskopf golf course, but also to the slopes. At these warming huts (members refer to them as “sugar shacks” because of the assortment of sweets offered), skiers can stop by and help themselves to a cup of hot chocolate, a bowl of wild-game chili, or Gruyère and sun-dried-tomato buns. The culinary programs in the resort’s six restaurants have also been overhauled by master chef Jim Tripi, who came from Discovery’s Spanish Oaks resort in Texas.

In addition, Discovery has completed Yellowstone Club’s long-delayed centerpiece, the more than 143,000-square-foot Warren Miller Lodge. The company is also moving ahead with previously shelved plans for the town of Rock Ridge, a base village located adjacent to the rambling lodge that will incorporate a skating rink, shops, and luxury condos. “[Rock Ridge] will serve as the community hub, with more food and beverage, a spa, a general store, condos, and townhomes—all ski-accessible,” says Adelson.

Family has always been a central theme at Discovery properties, and Meldman and Adelson have taken steps to expand the offerings for Yellowstone’s youngest members, fostering a camp atmosphere in which kids can roam the mountain freely, and even call for chauffeured SUVs to take them home or to club facilities. On the lower level of the lodge is the recently opened 20 Below, a 15,000-square-foot youth center that includes a basketball court, two climbing walls, a video-game arcade, a 40-seat movie theater, and a 1940s-style diner that serves grilled-cheese sandwiches and milk shakes.

Meldman believes that these touches go far toward realizing Blixseth’s original vision. “The skiing is amazing,” he says. “It’s so good that the members were tolerant of the service issues. But we are completing the package, bringing the software to match the hardware that is the mountain. We’re bringing the food and service they never had. Most ski resorts have a village, so we’re focusing on the village. We’re increasing summer activities, putting in the amenities the previous owners never got around to. We’re giving the skiing the service it deserves.”

The Club Up Close

yellowstone club is a deferred-equity, gated private-club community located about 50 miles from Bozeman, Mont. It is managed and partially owned by Discovery Land Company. Ownership is limited to 864 residences, with 150 national memberships. The minimum lot size is 2 acres for most single-family homes, and prices for lots begin at $1.7 million. Four- to five-bedroom condominiums and cottages begin at $3.5 million, and semicustom homes (4,500 to 6,000 square feet) range from $4.9 million to $6 million. There are currently fewer than 350 members. A one-time membership fee is $300,000 with annual dues of $22,000. The national membership program will cost $800,000 and will allow buyers to defer property purchase for up to three years. This includes the normal membership fee and a $500,000 credit toward real estate.