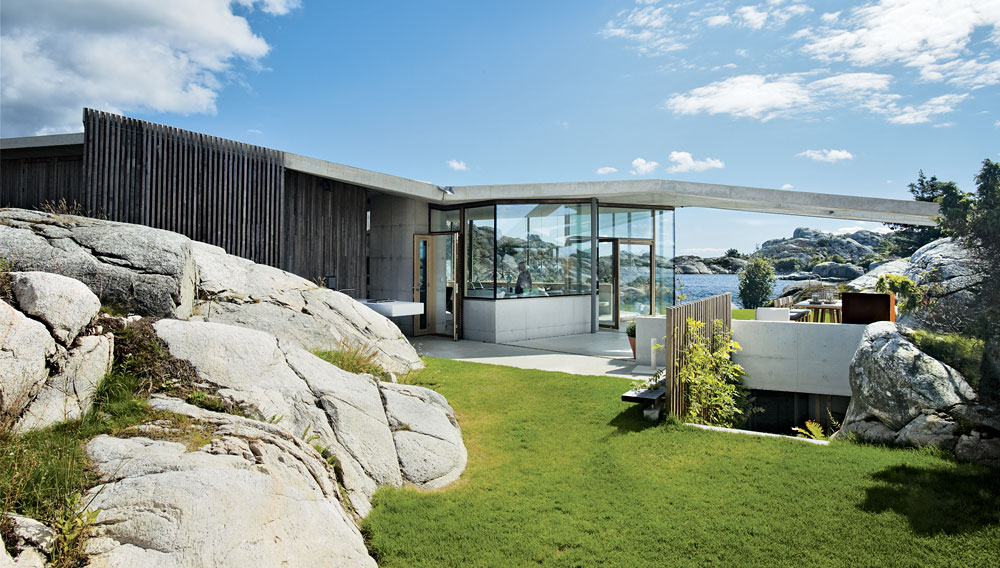 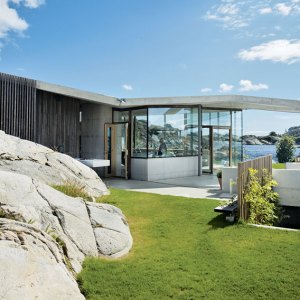 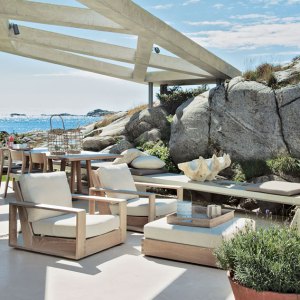 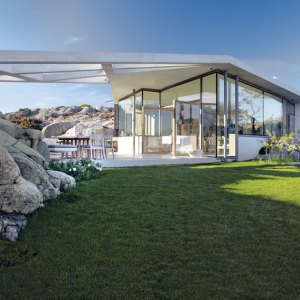 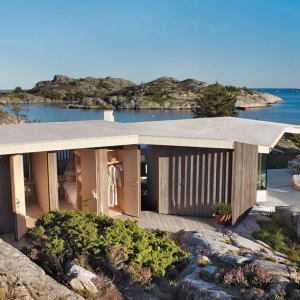 In Southern Norway’s seaside city of Kristiansand, whitewashed cottages line the shores. So while the owners of this strikingly contemporary retreat on an islet just off the mainland wanted something innovative, they also wanted something that would harmonize with the landscape. Charged with fulfilling these desires were Bernt Heiberg and William Cummings, of the Oslo- and New York–based interior design firm Heiberg Cummings, and the Norwegian firm Lund Hagem Architects. The team’s result, finished in June 2011, boasts expansive glass walls and a sweeping concrete roof that fit within the footprint of the 1,100-square-foot cabin that previously occupied the site. The open-plan kitchen with a Boffi island and the dining area feature minimalist furnishings from Ralph Pucci—walnut dining table, leather-and-steel folding chairs, pendant lights—that ensure the views are the focal point.

Tucked behind a sculptural corner fireplace, the home’s entrance is easy to miss. The front door, which opens to a walkway leading to the property’s dock on the North Sea, blends in with the wood paneling of the living room. In this space, contemporary influences meet traditional Norwegian elements. Furniture and art purchased in New York City complement ash walls and concrete floors. An oversize sofa from B&B Italia and club chairs and a coffee table from Ralph Pucci provide a neutral backdrop for the German artist Ellen von Unwerth’s framed photograph Bathing Beauties, Paris, which adds a burst of color. “The wife is very Continental in her taste,” says Heiberg. “She wanted to push the style beyond Scandinavian modernism for something that is not typically done in Norway.” At one end of the room, a shelving unit backed with glass lets in plenty of natural light. The glass panes front an open-air hallway that separates the living and dining wing from the bedrooms.

The geometric concrete roof connects the house to the surrounding outcroppings, which not only shield the home from the strong winds that blow through the islands, but also help to create the framework for a number of innovative outdoor spaces. The patio serves as a second living room for the family members, who lounge on crisp yet cozy furnishings from David Sutherland while taking in the striking coastline views. Overhead, cutouts in the concrete overhang allow the sun to cast its warmth on the space throughout the day. Nights, however, can be cold, so the family uses the outdoor fireplace to combat the chill. The corner hearth is a departure from more traditional Norwegian fireplaces, which tend to occupy a space’s center. The designers opted for a platform of iron plates to hold the open fires, rather than carve an opening into the outcrop.

A Plan for All Seasons

Large rotating glass doors off the kitchen bring the family outside, where great care was taken to preserve the landscape’s indigenous plants. An outdoor walkway composed of concrete and ash-wood slats connects the living and dining wing with the home’s bedrooms, which include three cabinlike, wood-paneled spaces and a master suite. Each of them, even the roomier master, is on the small side and mostly unadorned—a stylistic trait that is consistent with traditional Norwegian design. “Scandinavians love being outside, so our summer homes typically have tiny bedrooms,” Heiberg explains. “Even when it’s raining, it is a very typical sight in Norway to see people bundled up in down jackets and sitting outside with animal furs over their laps. You can’t keep us inside.”