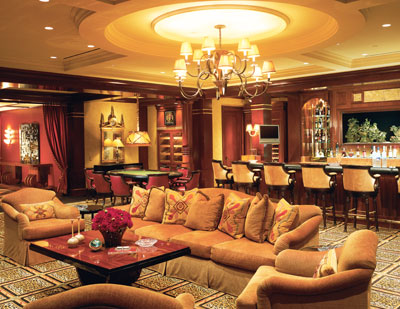 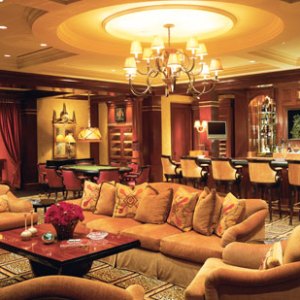 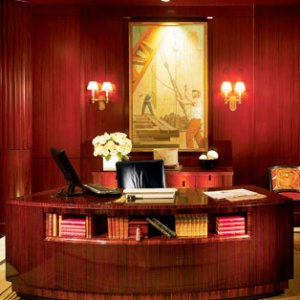 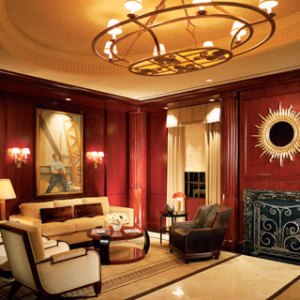 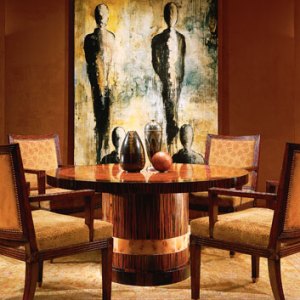 Landmarks are uncommon in the ever-changing landscape of Beverly Hills, but on Crescent Drive, one can discover such a rarity: a pair of elegant Georgian-style brick buildings that share a spacious courtyard featuring an Italianate bronze and terra-cotta fountain. Undisturbed by the surrounding hubbub of real estate development, the graceful columned structures, which are painted cream and have tidy dark green shutters, were created by Paul Williams, a prolific architect responsible for some of Southern California’s most majestic homes.

Williams completed the original Crescent Drive structure in the mid-1930s for Jules Stein, the Chicago ophthalmologist who founded the Music Corporation of America (MCA), an artists agency that would evolve into Universal Pictures. When MCA moved out, Charles (Tex) Thornton moved his aerospace corporation, Litton Industries, in, and in 1968 he commissioned Williams to erect a second, matching brick edifice and a parking structure across the street. After a brief interval of ownership in the late 1990s by telecommunications provider Global Crossing and the Pacific Capital Group, the two-and-a-half acre complex was purchased in 2004 by two entrepreneurial brothers: Tom Gores, founder of Platinum Equity, which specializes in mergers, acquisitions, and operations of diverse companies, and Sam Gores, founder of the talent and literary agency Paradigm. Tom, who propelled Platinum Equity into the Fortune 500 in less than a decade, acquired the newer, south building for his company, while Paradigm moved into the north structure.

To renovate the south building, Tom selected Frank Pennino, who designed his home in Beverly Hills and Platinum’s former offices in West Los Angeles (“Office Deluxe,” May 2003). “When we acquired this building, we weren’t just looking for more office space,” says Gores. “We wanted a facility that would reflect Platinum’s personality: a sense of warmth and openness; elegance without being too stuffy or arrogant; a layout that fosters communication.”

Although Pennino made no changes to the exterior, the interior required considerably more attention. “The central core of the building was very dark,” Pennino says. To alleviate the gloom—while preserving the integrity of the architecture—he added a pair of 30-square-foot skylights that are invisible from the outside. He rebuilt the interior over a period of 18 months with the assistance of project architect Steve Sharp, design associates Ron Malott and Scott Shelley, and project manager Sue Cunningham.

Pennino added a circular staircase beneath one of the skylights to help brighten the office spaces on the second and third floors. Under the other skylight, he removed walls between offices so that sunlight could reach the entire area. Offices around the perimeter have glass interior walls that allow indirect light from the windows to flood into the building, and mahogany shutters that can be closed for privacy.

Having solved the challenge of creating a brighter building, Pennino turned his attention to renovating the individual spaces. “The theme is Georgian meets Modernism,” says Pennino. “To make a transition between those periods is not unlike what was done at Claridge’s hotel in London—bringing the style into the 21st century.”

Pennino wanted the restored building to evoke the glamour of the 1930s, which is exemplified in such buildings as Radio City Music Hall. “I love the Art Deco period,” he says. “I think it was exceptional.” The entrance hall retains the mahogany paneling installed by Williams, but Pennino added a gilt chandelier shaped like the sun, which he hung over a black-and-beige star inlaid into a travertine marble floor. He designed the Art Deco–style Macassar ebony cabinet and the black-and-gold mirror frames, and employed custom-made carpets with 1930s overtones.

Off the lobby, a discreet door leads into the Platinum Equity club room, where the 100 or so employees can relax or entertain guests. The room’s mahogany moldings, deep sofas, and leopard-print carpet convey the impression of a private men’s club. A plasma screen over the fireplace, a cigar humidor, a wine cellar, a bar with an aquarium backdrop, and poker and pool tables enhance the ambience of a distinctly male preserve. “This is more than just a workplace,” says Gores. “I want it to feel like a home for the people who work here. Our people are high performers, and our culture is intensely collaborative. This is where we nurture all the important relationships that are the foundation of our business.” Pennino added a private telephone room and a silver-leafed bathroom with a marble sink to be what he calls “our homage to El Morocco.”

One floor below, a fully equipped kitchen provides snacks and meals for business meetings, sports events, and special occasions, such as celebrating the closing of an important deal. In fact, each floor of the building has a kitchen that serves a variety of fare, from light breakfasts to formal dinners.

Elevators with embellished bronze doors carry visitors to the executive levels. In the conference room and offices on the second floor, the designer employed earth tones. Walls are decorated with framed black-and-white photographs of architectural projects from the 1930s. A spacious kitchen area includes granite counters and espresso machines. “I haven’t worked for a company that has thought so much about the employee workplace since I did the design for Amblin Entertainment,” Pennino says.

The circular staircase leading from the second to the third floor wraps around a large ficus tree that reaches toward the skylight. The main reception area features a bowed, Macassar ebony desk made in the 1930s for the head of the Austrian railway company. A marble fireplace with an ornamental iron screen designed by Pennino complements the furniture made in the Art Deco style of Jacques-Emile Ruhlmann. Chairs from the 1940s are by Lucien Rollin, who worked in Ruhlmann’s studio in Paris. The large paintings by Garth Benton that are displayed on facing walls were inspired by Pennino’s own collection of photographs of the Empire State Building being constructed. “During the Depression, [photographs of] WPA projects often showed people working. These paintings are about industry, too,” Pennino explains. “We are keeping the focus on human endeavors.”

In the main conference room on the third floor, a collection of ancient Chinese art balances 21st-century technology in the form of a voice-activated satellite communication system with two screens. In the World of Platinum room, a map of the world painted on the wall by Garth Benton recalls an earlier era of steamships and airplanes. Metal disks pinpoint the location of Platinum Equity’s global companies and offices. A plasma screen rises out of a cabinet designed by Pennino to display films about the corporation for viewers who lounge in 1930s-style streamlined chairs. Giant cylindrical lamps suspended from recessed domes in the ceiling create the impression of height without compromising the sense of intimacy. “Decorating is such a temporary art form,” says Pennino, “that the designer must maintain a degree of perfection.”

Panels of gilded and carved figures from the 1936 World’s Fair stand at the entrance to the executive dining and conference room, which contains a round table that seats 16, as well as a smaller table for more intimate affairs. A 1930s ebonized oak buffet features carved insets of gilded doves. Vitrines and shelves showcase a growing collection of Chinese art from the Han dynasty. “It is a fascination on my part,” says Pennino. “I think the shapes of the vessels, the stylization of the horses, are the beginning of Modernism. The collection gives the project depth. If everything is the same, it becomes boring.”

A chandelier of wine-colored Venetian glass dominates Gores’ private office. The chandelier is suspended from a cylindrical recess bordered with Roman numerals representing significant dates in Gores’ life, including those of his wedding and the births of his three children. His desktop is mounted on the propellers of an old steamship, as if to suggest perpetual movement. The walls are paneled in dark anegre, and the capitals of the wood columns are inset with bronze plaques from an old granary that portray agrarian scenes of labor. To signify Platinum’s success, Pennino designed a silver medallion, set in a Jerusalem-gold limestone fireplace, that depicts Pegasus rising from the flames.

“Frank and his team know us well, and they captured the mood and feel of Platinum,” says Gores. “The design accommodates hard work coupled with quality living, which defines our approach.”