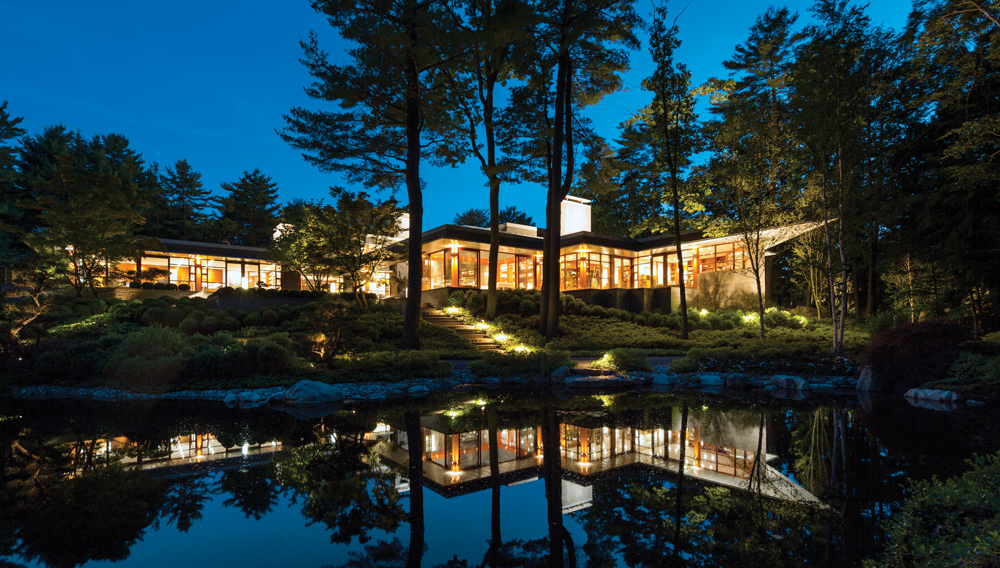 An architect’s focus on light transforms a property into a shining example for indoor/outdoor living.

Brian Hemingway is sensitive to light in the best way possible. The Vancouver, British Columbia–based architect wanted this 22,000-square-foot home near Boston to glow like a lantern at night, and he attained that goal on behalf of the homeowners, without a doubt. The husband and wife, who had seen Hemingway’s work in a Robb Report publication in 2006, had asked him to renovate a recently purchased home. He achieved that end, too, but it took five years and required removing nearly all of the original 15,000-square-foot residence, which dated to 1987. “I virtually ripped the whole thing apart on paper, presented the scheme, and they fell in love with it,” he says.

Hemingway’s attention to light—how it passes through a space, and how it changes over the course of a day and from season to season—moved him to blur the home’s boundaries between indoors and out. Using what he calls flying beams served both purposes, enhancing the play of light and extending the home into the land outside. The owners embraced the nature of the property, literally and figuratively. A substantial native boulder was moved slightly to suit Hemingway’s design; the terrace was built around it. The bonsai displayed on the bench are part of the husband’s collection of the potted trees. When the weather turns harsh, as it inevitably does in New England, he moves the plants to the elegant greenhouse that sits near the pond.

The atrium provides a grand gathering area for parties and a light-filled gallery for the owners’ art collection. The wood and stone that Hemingway favored for the rest of the home informed the space’s color palette—an easy choice, perhaps, but settling on a shade of stain for the Douglas fir took months. “[The owners] felt they wanted a more rich tone, but they didn’t want to hide the grain or the beauty of the wood,” recalls Colin Flavin, a Boston-based architect who worked with Hemingway on the project. The solution came from an unlikely source: The husband smokes cigars, and the burnt umber hue of a Davidoff cigar wrapper that he retrieved from his jacket pocket put the design team on the path to success. Virginia Mist granite delivers the gray tones and is used indoors and out, heightening the boundary-blurring effect. The upper reaches of the atrium and the living room feature more of Hemingway’s flying beams, as well as a grid-like signature feature that he calls a trellis. Normally he places such trellises outside to extend the living space of a home, but here, he says, it serves “more as a visual modifier of space.”

Bringing natural light inside the home was a priority, but artificial illumination was not neglected. The fixture composed of milk glass and brass nickel that hangs over the granite countertop in the kitchen is bespoke, as is the showstopping suite of pendant lights in the main dining room beyond the atrium. The lights in the dining room, created by Cambridge, Mass., glass artist Carrie Gustafson, represent six months to a year of work. “Every aspect of that is custom-made,” says Flavin, who recalls working up a full-scale model of the lights in the designated dining space by hanging beach balls on fishing line from its ceiling. “Tremendous care was given to so many aspects of craftsmanship in the house,” he says, noting that the outer globes had to be treated with a special plastic finish that resists breakage. The twin dining tables allow the owners to seat as many as 40 dinner guests comfortably.

Though the owners are ardent art collectors, they did not build their home to showcase specific works; the real artists here are the architects, Hemingway and Flavin. So deft were they at inviting nature into their creation that, from certain angles, it can be hard to tell where the outdoors stops and starts. The image shown below was taken from an exterior sitting area, which looks back into the home. The extensive use of glass here permits a view that reveals several adjoining spaces. The living room, enlivened by flying beams that admit light, features a limited-edition Iris table from Barber & Osgerby and a curvy, richly gray Vladimir Kagan sofa. One decorative detail, however, is conspicuously absent. “There are deliberately no window treatments, so that Mother Nature weaves the most beautiful textural backgrounds,” says interior designer Andrew Sheinman, of New York’s Pembrooke & Ives. He oversaw the interiors, working alongside his colleague Michael Lewis. “The seasons change the look and aspect of the house,” says Sheinman, “and we wanted to play on this.”

Only in the master suite does a non-neutral color—indigo—play a significant role. “We wanted [it] to stand apart from the rest of the house, as this is a more private and intimate area,” says Sheinman. He notes that he and his colleagues thought the deep hue “would be a great foil for the Douglas fir and granite.” The bedroom features table lamps by Hervé Van der Straeten, a pair of armchairs by the Danish-born American designer Jens Risom, and a custom bed by Pembrooke & Ives. The sofa and chairs in the sitting room are by Roman Thomas and surround an Yves Klein–inspired glass cube table by Fredrikson Stallard. The carpets in both spaces are by Tai Ping, and both spaces afford spectacular views of the wooded 13-acre property.

The property’s indoor pool area is a tranquil place that embraces all the light New England lavishes upon it. While neither the landscaping nor the abstract figurative bronze is intended as the main focus, both are artfully composed and soothing to gaze upon. The pool, which is 60 feet long, sits alongside another Hemingway signature: a crenellation. It is the zigzag expanse of glass that interrupts the stained Douglas fir framing. “I use it like a prism, and I use it with water, usually a pond or a reflecting pool,” says Hemingway. “You get a sense of light being reflected and refracted.”

This residence is one of the few East Coast projects that Hemingway has agreed to do (he has completed many in Canada and has also worked in California, New Zealand, and Malaysia), and in reflecting on the property, he credits the owners’ enthusiasm with having convinced him to carry forth. “It was a huge leap of faith and expense to design the house I made for them,” he says. The result: a light-filled home that is far from light-minded.