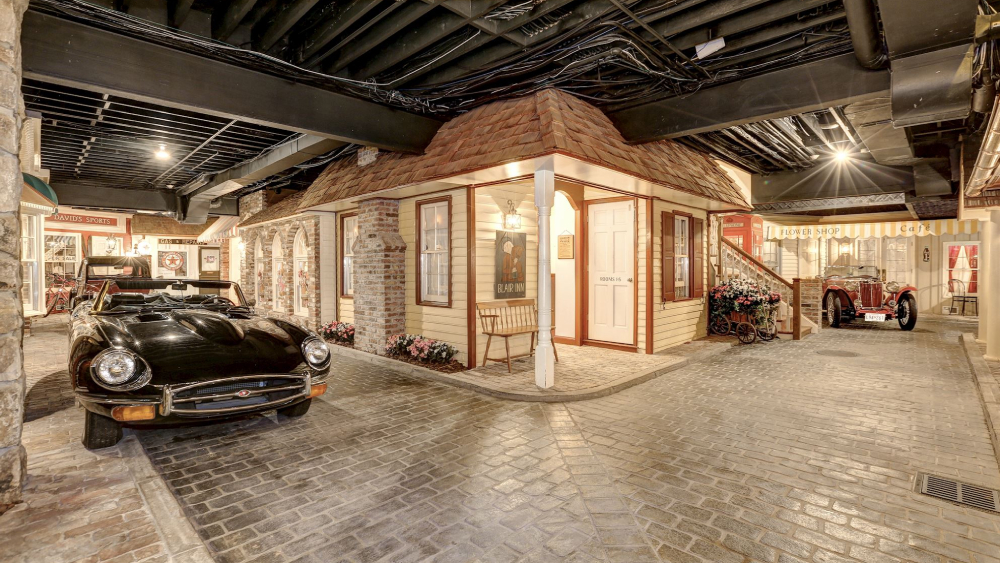 With people confined to their homes for what seems like an eternity, many of us have gained a new appreciation for the simple things, like taking strolls in town along quaint streets with shops. But one mansion on the market promises let you take in the town without every leaving the house.

Currently up for sale in the swanky DC suburb of Potomac, Maryland, this estate is not wanting for space. Measuring just over 12,000 square feet, it has every amenity one can expect from a dwelling going for a cool $4.5 million: seven bedrooms, eight full baths, 10 fireplaces and a four-car garage. But perhaps the most impressive feature is a scale town (complete with functioning cars) that exists in the finished basement.

Modeled after the town centers of yesteryear, it has stone-paved thoroughfares and 15 brick storefronts (including a movie theater and a post office), several fleshed out with realistic interiors. The space is so large that it also fits three real cars. And not just any cars but a Citroën 2CV Charleston Edition, a Jaguar XKE Series II or III and an MG TD plus a bike. In other words, even if the actual garage is filled to capacity, the vehicular storage options are plenty.

The exterior of the Potomac mansion.  Courtesy of Homevisit

Listed by Washington Fine Properties, the palatial home rests on a full four acres of land with a gated perimeter. Though the main house is plenty spacious, it also comes accompanied by a two-bedroom guesthouse, a pool house (to go with the pool, of course) and a fully illuminated tennis court so players can keep their vigorous matches going even after the sun sets. And if a buyer is looking for a truly turn-key property, the option exists for every structure to come fully furnished as it’s currently staged.

But if whoever snaps it up feels as though they really could use some more space, the empty two-acre lot adjacent to the finished one is also up for sale.

See more photos of the home and basement below: