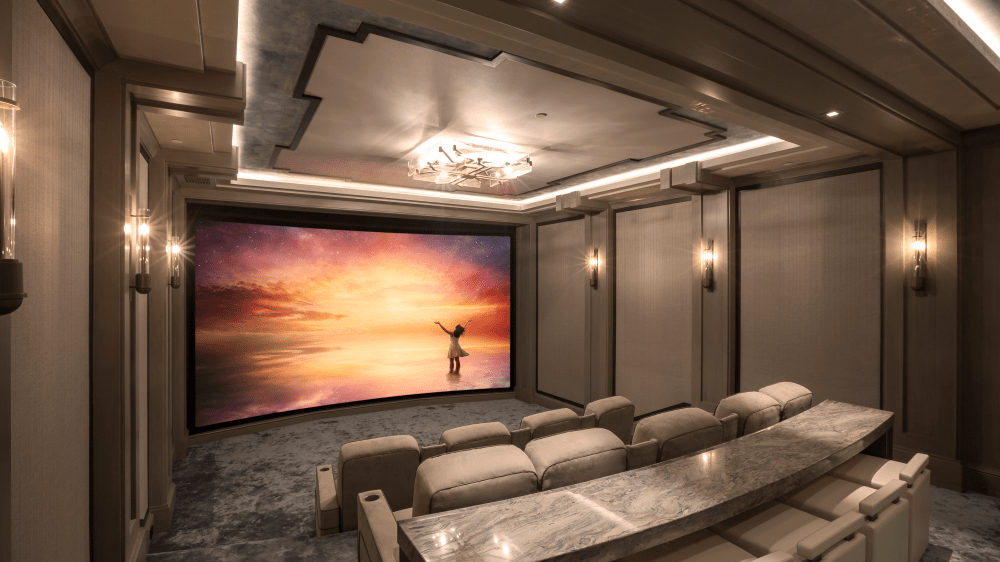 Bigger isn’t always better, but a $500,000 private IMAX theater is decidedly superior to the average home cinema. Which might be why the much-hyped film format is slowly and steadily finding its way into modern mansions and high-rises.

One couple, who preferred to remain anonymous, recently spent 18 months installing the IMAX Private Theater Palais package in their Los Angeles home. The result was a 36-foot deep, 19-foot wide viewing experience that seats nine, with another five seats behind the bar in the back. The homeowners called the process a complicated and challenging one, noting that it required coordination between technicians in the U.S. and Asia. But, ultimately, it was well worth it.

“It’s a wonderful escape and showcase for the home,” the wife told Robb Report. “And we love sharing it with friends and family. It’s made for some fantastic Game of Thrones viewing parties. It’s fair to say that we’ve become quite spoiled.”

The private IMAX at 130 William  Photo: Courtesy of Binyan Studios

For others, IMAX’s in-home potential began with 520 W 28th Street, the late Zaha Hadid’s only residential project in New York City. The building announced a standard array of amenities as its closings commenced circa 2017, including a spacious pool, a courtyard with views for days (and nights) and a fitness center. But what made the property pop was its 12-seat IMAX theater. It was the first in a residential setting in New York.

The announcement made waves, and, as so often happens in the great amenity race, another tower made a similar bid. David Adjaye’s first NYC skyscraper, 130 William, made its own IMAX ambitions clear just last year as it launched sales. The building only just topped out, but it’s still on track to house New York’s second ever private IMAX.

And while it’s still a relatively new concept Stateside, the notion of a private IMAX theater has been circulating around Asia and the Middle East for quite some time now. IMAX launched a private theater package in China in 2015, and it’s only grown in popularity since. In most cases, these theaters are installed in-home rather than in a building amidst 242 other units.

And the Los Angeles couple cites the new theater as a major presentation point of their already lavish home, a perk that others—including 130 William and 520 W 28th—are certainly echoing. It’s the kind of amenity that can help close a deal: The Versailles-esque Playa Vista Isle mansion, for instance, sold on the auction block for $42.5 million, private IMAX included. The experience has even made its way to the yachting world—Feadship’s Lady S sold this past January for $100 million to Redskins owner Dan Snyder, complete with its own on-board IMAX.

Should that pique your interest, there are two private IMAX showrooms in the U.S. where buyers can learn more. One at the company’s West Coast HQ in Playa Vista, and the other at, you guessed it, Zaha Hadid’s 520 West 28th Street.