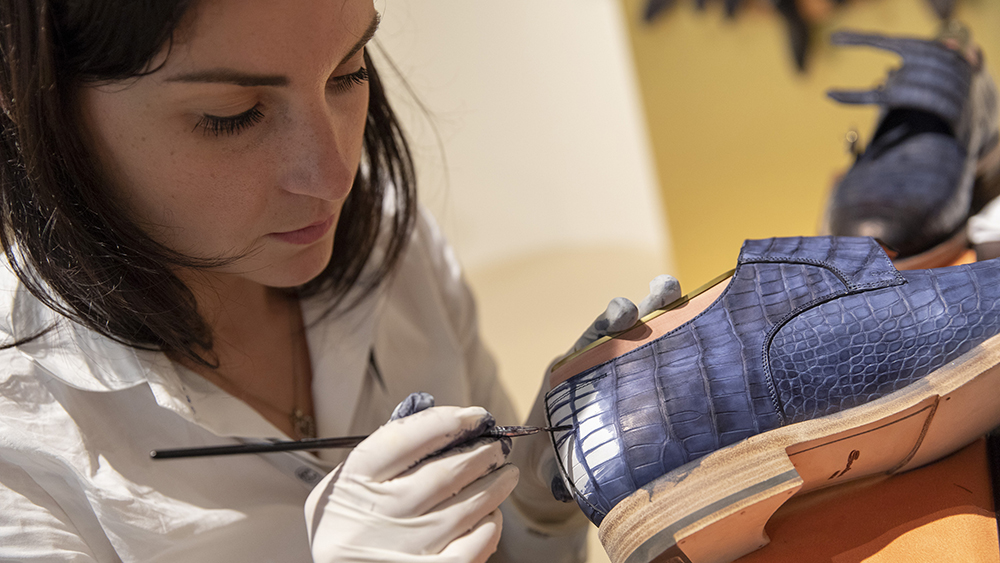 “The enemy of artisans is not technology,” said Alberto Cavalli, the general curator of Homo Faber, a special cultural exhibition devoted to European craftsmanship created by The Michelangelo Foundation. “Technology is an instrument. The real enemy of artisans is ignorance because if people cannot tell the difference between something that is made with love and care over one that hides behind itself…” His words trailed off, falling into the insatiable void that has swallowed up small businesses, family-run outfits, and specialty makers for decades.

Everywhere in luxury, handcrafted arts have been on the verge of extinction. To Cavalli’s point, while there is a devoted and sophisticated clientele who are fiercely loyal to legacy brands, they are far outnumbered by millions of consumers who regularly choose an off-the-rack option seduced by mass-produced goods that have stepped up their design games in major ways. And, simply put, because acquiring couture-level quality costs real money.

But we weren’t listening to pleas for patronage or an impassioned battle cry. This was preview day, where a group of international journalists, who had just arrived on shores of San Giorgio Maggiore island in Venice, were about to roam 18 curated exhibits devoted to everything from fashion and embroidery to jewelry-making, watches, one-off design objects, motorcycles, and restoration, including one supremely attractive vintage yacht. The show opened yesterday, timed perfectly with the Venice Biennale and just before the London Design Festival. The opening ceremony had The Michelangelo Foundation founders Johann Rupert and Franco Cologni welcoming the mayor of Venice and other notable guests, but there was zero pomp.

For an editor who is no stranger to press trips or exhibitions, anticipation ran high. Running into Caterina and Raffaele Fabrizio, siblings and directors of the spectacular Italian fabric house Dedar, on the lawn felt understated, unexpected, and cool; everyone just wanted to keep exploring. Rupert, the chairman Swiss luxury group Richemont, had conceived of this showcase with Cologni two years ago, he shared.

It seems especially fitting that as we reflect on the decade since the global financial crisis, the desire for handcraftsmanship, quality, and enduring traditions has increased. Yet a gathering of European heritage brands and superlative makers had not been attempted like this before. Some of the best international design shows break talent and give us fresh design concepts to feast on (or remain baffled by), but reverence for the old way and those deeply valued traditional methods isn’t usually part of the program. Here, Rupert and Cologni took a fairly simple approach: getting us closer to the crafts with live demonstrations and presentations that highlighted and honored the indisputable mark of the hand.

Eilean is a beautifully restored 1936 yacht now in the care of Officine Panerai.  Courtesy: Tomas Bertelsen

As I watched a 22-year-old artisan from Hermès reveal the particular stages of making a saddle, it was difficult to be jaded. So many times, I’ve read (and have reported on) the techniques and skills needed to execute one piece. But seeing the process live and learning that he, like his fellow artisans in the workshop, loves to ride horses, the connection was stronger. I stood fairly transfixed watching Emilie Marques, a craftswoman from Cartier, meticulously sculpt a piece of ruby tourmaline, slowly transforming a surface that would eventually become a diamond-accented accessory.

The simplest way to learn how complex and specialized these techniques are is to try your own hand at them. The team at Montblanc handed over the wheel (literally) as my maiden voyage into nib creation began. Frank Derlien, the company’s head of final assembly and nib manufacturing detailed the 35 steps required to create a single 18-karat Montblanc nib. I sat with the small but might piece nervously making figure eights over a grindstone suddenly very aware of the fact that a pen is a beautiful but useless object if its writing source suffers an accident by a neophyte.

The design high for an interiors person was undoubtedly acclaimed designer India Mahdavi’s stellar tribute to Henri Rousseau. For the uninitiated, she made the French post-Impressionist painter a Wes Anderson-like hero, inspired by his rich forest scenes and crafting her rendition in rattan via the incredible artisanship of Spanish workshop Rattan Deco and furniture by François Passolungh.

And while I leave all auto and aviation expertise to my more machine-minded colleagues, Stefano Micelli’s curated Workshop Exclusives presentation had me gravitating to machines that wouldn’t normally register beyond their cult of intrigue. (I realize most everyone else find cars and machines fascinating.) While it was easy to appreciate the dressed-out Vespa makeovers produced by Bottega Conticelli, I was surprised to stand in a conversation with the Konner helicopter team asking questions about their K1 model, fiber glass, and the fact that they build their engines in-house.

Experiencing Home Faber meant meandering across gardens and wandering through the halls of the Fondazione Giorgio Cini, a historic,16th century site that once housed gondola workshops. It’s the myth in living color for all of us sappy Western visitors. Stunning backgrounds made the entire program more engaging, but that only goes so far. And there are enough photos on Instagram to make you feel like you’ve already been there. At risk of being saccharine, the most resonate element of Home Faber for me was the human one.

The Centuries of Shape showcase was a look at the evolution of vase and glass design.  Courtesy The Michelangelo Foundation

While visiting Centuries of Shape, a showcase of 50 iconic vases highlighting the evolution of design, I was impressed with the young, student-aged ambassador who guided me through the array. She was one of 100-plus, on-site ambassadors selected from 26 prestigious European schools and institutions who was studying craft. Aside from her knowledge and understanding of 20th century design history, I was both impressed and stunned when, while telling me about her own command of niche jewelry-making techniques, she confidently handed me her business card with a very clear invitation, If you ever want to do a story on this subject.

It was a charming and slightly brazen move – the kind that a humble relic from the Gen-X era can only admire. I liked this bright-eyed and rather artful hustle. It signaled that she shared, like every other youthful ambassador at Homo Faber, that there was a future in these specialty arts. And maybe it is its own sort of rebel yell: You can choose woodworking or gem sculpting over an MBA in the digital era and still make a living . . . and probably get some good press.