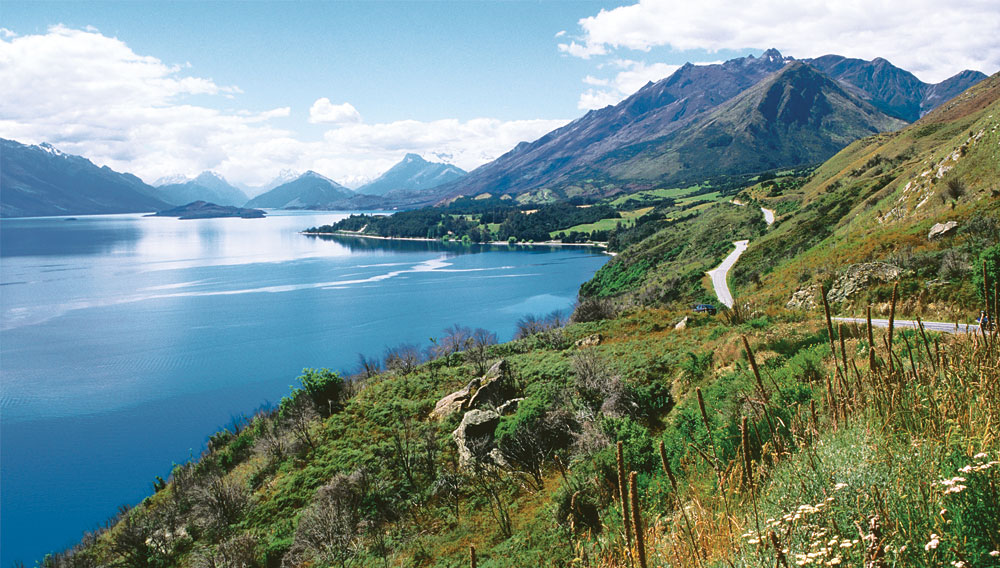 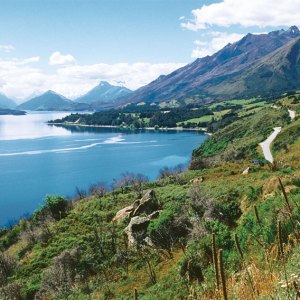 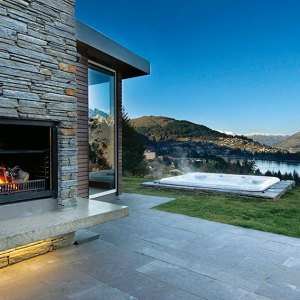 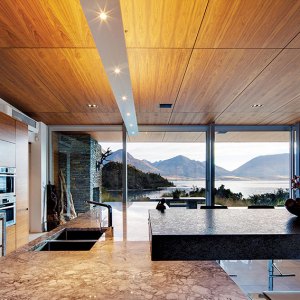 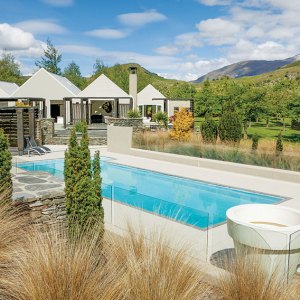 The lake and alpine resort destination of Queenstown, on New Zealand’s South Island, has long been a haven for young backpackers and thrill seekers of all ages. Its location amid the Southern Alps, along the shores of Wakatipu Lake, and near other natural attractions makes it an ideal base for sports nthusiasts, whether they enjoy quieter pursuits, such as hiking and fishing, or heart-racing pastimes like canyon swinging, 440-meter bungee jumping, heli-skiing, and paragliding. It is an all-season destination, and at the right time of year one can golf in the morning and race down snow-covered slopes the same afternoon.

In recent years, Queenstown’s reputation for adventure has broadened to include an understated, Kiwi-style sense of luxury. While Louis Vuitton—the world’s top luxury brand—has an outpost here, the locals and tourists appear to prefer upscale but casual UGG boots and possum fur bags to head-to-toe Prada and Hermès. “When we sell luxury,” says Jacqui Spice, who runs the local concierge service Touch of Spice, “it’s about the food, the vineyards, the land, the people.” Seemingly down-to-earth diners who sip Peregrine Winery’s acclaimed $146-per-bottle Pinnacle 2009 Pinot Noir at Botswana Butchery—a pricey restaurant where dinner jackets are rare—appear to bolster her assertion.

Just as this atmosphere of low-key luxury is enveloping Queenstown, so are many of the area’s real estate developments experiencing renewed life on the heels of the global financial crisis. Vacation-home real estate is booming, with overall property volumes at 88 percent of pre-recession levels and sales of home lots (based on 2013 data) the highest since 2007, according to the Real Estate Institute of New Zealand and Property IQ. At the area’s Jack’s Point residential community and resort village, where a Four Seasons hotel is rumored to be in the planning stages, high-end lots that sold in the early 2000s for $2 million or $3 million fell to $1 million during the slump; however, according to John Darby, principal of the Queenstown development firm Darby Partners, which created Jack’s Point, “They’re working their way up to $2 million again. The best time to buy is when you’re on the ascendant, and that’s just now.”

Americans such as the hedge fund manager turned developer Julian Robertson and the former Levi Strauss CEO Tom Tusher know what it means to purchase property here—the former being the creator of the resorts Kauri Cliffs, the Farm at Cape Kidnappers, and Matakauri Lodge, the latter being the developer of Blanket Bay Lodge. Outsiders unfamiliar with the region but looking for similar or smaller-scale investment opportunities should do their homework.

Foreign purchases of properties of more than about an acre (0.4 hectare) adjoining a lake or reserve, or of any properties exceeding roughly 12 acres (5 hectares), as well as other types of land deemed sensitive, require the consent of the Overseas Investment Office; non-Kiwis can pay upwards of $16,500 plus lawyers’ fees to get an application through this process. Says Darby, “It’s about bringing the right sort of people here who understand what we’re trying to do, who are aligned with our essential and environmental values.”

Those interested in exploring luxury living Kiwi-style may wish to investigate the second-home opportunities in and around Queenstown. A number of these options, from estates and homesites in exclusive communities to significant private residences, are profiled on the following pages.

A native South Islander, Darby has been developing residential properties and tourist attractions in Queenstown and its environs since the 1980s. Around 2000, his firm broke ground at Jack’s Point—a 3,000-acre settlement on Wakatipu Lake, about 15 minutes from town—with a plan to offer 1,300 homes at seven different price points.

The most exclusive enclave, the Preserve, comprises just 36 lots sprinkled lakeside and abutting the Darby-designed 18-hole, par-72 Jack’s Point Golf Course. Most of the lots measure about 3.5 acres and start at $1 million, though there are larger sites for as much as $3 million. At press time the development lists five sites for sale, among them Lot 1, a 4.4-acre parcel nestled between the golf course and the lake and offered for $1.9 million.

Homes at the Preserve tend to be elegant four-bedroom, four-bath modern glass boxes with stone and cedar accents that cost from $3 million to $6 million. Five residences have been built to date, and one Preserve resale is currently on the market.

The project reportedly has attracted Four Seasons, which is said to be planning a 100-room hotel (“modern mountain cabins,” says Darby), with building set to begin in winter 2014. (Four Seasons has not announced the development.) Golf membership has always been automatic with a purchase at Jack’s Point, and perhaps Preserve homeowners will have access to the new resort’s amenities, such as the spa, clubhouse, and pool. Four Seasons–branded residences will likely follow but not until “the hotel is up and running with yield,” says Darby.

In 1864, the French brothers Peter and John Butel planted wheat on their 500-acre Mill Farm, which today is the site of the Millbrook resort and residential community, where development began in the early 1990s. Privately owned by Eiichi and Hiroko Ishii, Millbrook comprises a range of residences—from modestly priced villas to two- and three-bedroom cottages and expansive fairway homes—as well as a 175-room resort, a spa, a pool, tennis courts, and three 9-hole golf courses. Many of Mill Farm’s original buildings are still in use; the Millhouse, which was the old flour mill, houses one of four restaurants and a conference center.

So far, some 200 of the 350 planned homesites have been developed. Most parcels are under an acre and range in price from approximately $850,000 to just under $1.58 million. Eight sites and nine homes are for sale at press time. Streamside 7—a four-bedroom, four-bath, 4,090-square-foot fairway home on one-third of an acre that fronts the first hole of the Arrow 9 course—is being offered furnished for $3.5 million.

Potential buyers can expect to pay a $23,000 application fee. Annual country club membership is $2,600 for those who spend 60 days or more a year at Millbrook, while those in residence less than 60 days yearly pay $1,800. The annual property management fee is $4,000.

True to its 19th-century origins, Closeburn Station remains a working farm, its 3,000 acres dotted with green pastures grazed upon by merino sheep and Angus cattle. Thus far, about 18 of the 27 sites have been developed.

Three properties are for sale at press time. Lot 18, one of the two plots available, is a breathtaking 3-acre parcel priced at $2.46 million. From its elevated vantage point on a bluff, the site affords striking lake and mountain views. And 5 Closeburn Station—a four-bedroom, three-bath, Nordic-style lodge of schist, kauri wood, and mud bricks by the New Zealand eco-architect Graeme North—is listed at $4.1 million.

Ownership in Closeburn Station comes with access to the community’s entertaining barn (the old sheep-shearing shed), stables, equestrian center, and tennis courts. Owners can hike a network of trails and fish on Lake Kirkpatrick, and they also receive a one-twenty-seventh share in the working farm.

When stalking Queenstown for that perfect vacation property, prospective real estate buyers can stay close to their hunting grounds. Here are a few of the options.

The Spire  Located on Church Lane, a short walk from restaurants and shopping, this boutique hotel offers 10 chicly appointed rooms, each with modern furnishings, stone-clad fireplaces, and spacious balconies.

Touch of Spice Private Villa Collection  The villa rentals in Touch of Spice’s portfolio—selected in part for their architecture and design—allow for immersion in local living. The company’s concierge service can handle all the details.

In addition to the real estate opportunities within resort communities and other residential developments, the area in and around Queenstown presents exceptional private properties for the

consideration of potential buyers. Following are six listings (current at press time) that offer different styles and varied settings, the latter ranging from proximity to the action of the city to quieter Arrowtown, which is considered rural Queenstown.

This steel-clad modern residence by the Auckland firm Fearon Hay Architects affords views of the Hills golf course and features an interior courtyard for entertaining.

Located on 1.5 acres and surrounded by mountains (the master suite has views of both the Coronet Peak ski field and the Remarkables range), this farmhouse-style home has light-filled, open-plan spaces. The lot is ringed with evergreen conifer hedges for privacy.

This modern home is built of local schist and wood and has enormous windows looking onto Wakatipu Lake and Cecil Peak. A spa pool and entertaining space are outdoors.

The walls of glass in this open-plan schist-and-cedar home afford striking views of Bob’s Cove. The property has private beach access.